A return to the scene of the crime: Kansas City Chiefs at Tampa Bay Buccaneers, Week 4 recap 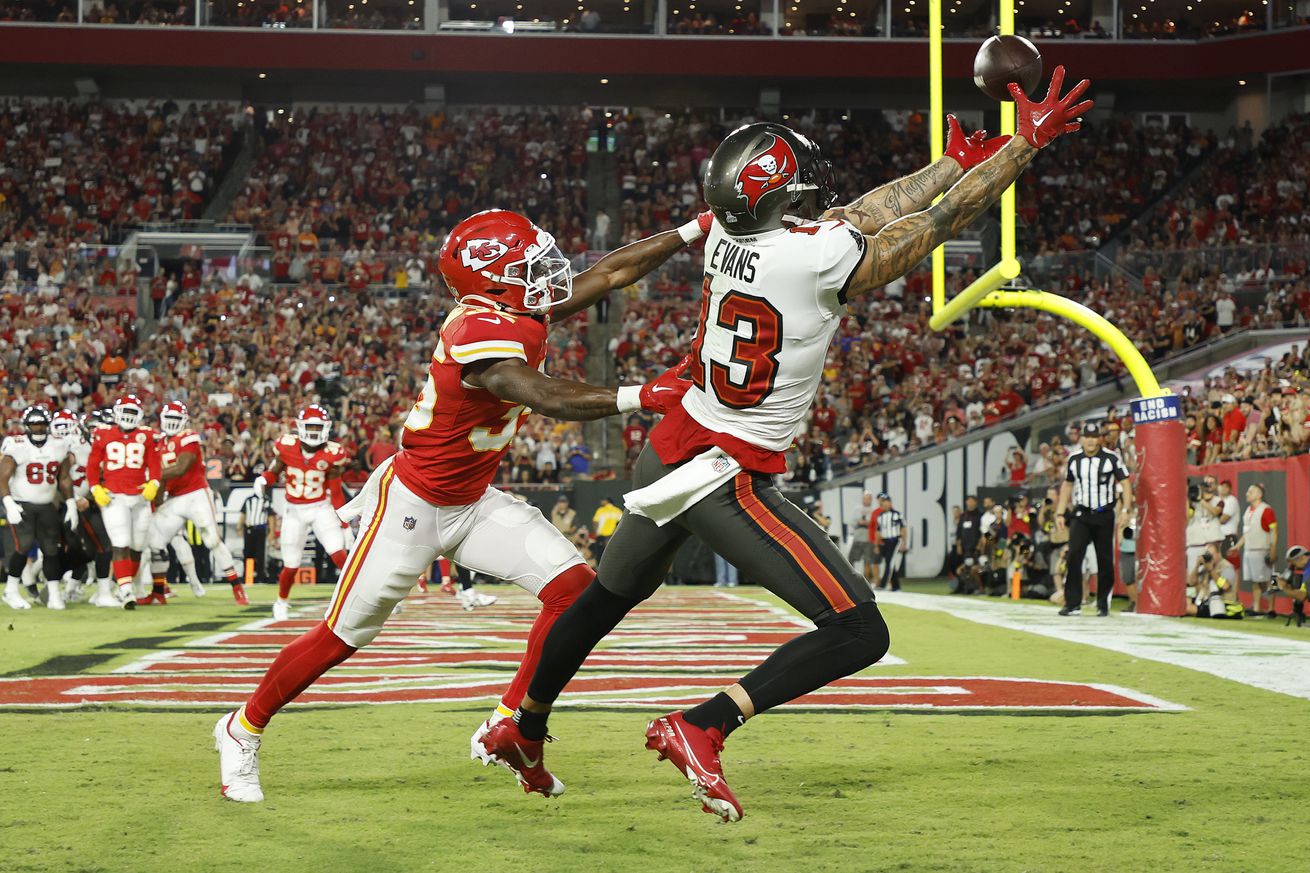 The last time the Kansas City Chiefs traveled down to Tampa Bay to face the Bucs things went pretty well for the guys in pewter. This game, not so much.

Bucs vs. Chiefs is a matchup that Bucs fans are becoming more and more accustomed to seeing. Week four would be the third time in the Tom Brady era that Patrick Mahomes has traveled down to the ‘Sunshine State’ for a duel with the G.O.A.T. While the series was evenly split at 1-1, the matchups have been vastly different.

The introductory matchup in the series was November ninth of the 2020 season. Kansas City roared out to a colossal lead with first quarter stat lines for the ages. The second half was played in much tighter contention, still the lead proved to be too gargantuan for the Bucs to overcome. Kansas City was victorious 27-24.

Matchup number two? That was for all the marbles, Super Bowl LV. The Tampa Bay Bucs played a near perfect game while the Chiefs offense had experienced its first glimpses of mortality. Kansas City was outscored in that game 31-9 as the Bucs evened up the series at one a piece.

Since February seventh 2021 a lot has changed. The Bucs are now sporting a very different offensive line and have lost all of the players who caught touchdowns from Tom Brady in that Super Bowl matchup. Kansas City has since parted ways with their most explosive playmaker, as well as their only scorer from that game, however, if the past is any indication of the future, it is worth noting that since the Chiefs fast start in their first matchup they have been outscored 55-19 by Tampa Bay.

Tom Brady- TB12 has not looked like himself in the first three games of the season. Brady had just three touchdown passes in his first three games this year. The expectation was that with many of his weapons returning to action this week he would return to form. Brady was not operating at his peak but did show a significant jump in his production from previous weeks. He was able to throw for over 380 yards with three touchdowns.

Bucs defense- The Bucs defense was…. Not great. Tampa wasn’t able to stop Patrick Mahomes, Travis Kelce, or any Chiefs running back. The Bucs defense existed on field, solely, to be a part of a Patrick Mahomes trick shot highlight film. Tampa’s defense had been the bright spot of the team’s season through the first three games. Unfortunately, for the Bucs tonight was game four. Game four featured Tampa Bay’s defense being consistently posterized so painfully that one can only hope this is a game that will sting their pride and potentially motivate them moving forward, very similarly to how their regular season loss to Kansas City in the 2020 season did.

Bucs special teams- The Bucs have not had a promising return game in quite some time. The special teams unit, as a whole, has improved this season, still the group struggles at times. It is not surprising to see them remain a thorn in the Bucs’ side. Rachaad White has been returning kicks for the Bucs this year and a fumble by the rookie on the opening kickoff of the game led to an early touchdown, which put a team that has struggled to score points this season down, in an instant 7-0 hole. Later in the game another rookie, Jake Camarda, just one week after being a noted positive in the game recap, sent a kick off sailing out of bounds giving Kansas City’s explosive offense tremendous starting field position.

Giving your opponent bulletin board material before a game where you are already up against a top tier offense is never advisable but if you do feel so inclined, you had better follow that up with an elite performance. Shaq Barrett had a forgettable Sunday night with two tackles and no sacks. He was, however, able to be a firsthand witness to the Chiefs’ line he mocked dominating the line of scrimmage as their offense ran the ball right through Tampa’s defense for well over 150 yards.

Keanu Neal- The Bucs signed Keanu Neal as a depth piece in their safety rotation. Formerly of the Atlanta Falcons and Dallas Cowboys, Neal hasn’t taken many defensive snaps this year but when Logan Ryan left the game, he stepped in and found himself making an impact. He had a few attention grabbing big hits and finished the day with six tackles.

Mike Evans- Mike Evans is a predictable name to be listed here but that doesn’t mean it isn’t deserved. If we’re discussing number one wide receivers Evans is as good as it gets. He is the gold standard and his impact tonight really emphasizes how much Tampa missed his presence last week, when they were only able to score 12 points. Mike Evans is top notch, as reliable as they come. The Bucs did not have a lot working for them against Kansas City but they had number 13. Two touchdowns, eight catches, 103 yards, Mike Evans continues to be everything a Bucs fan could ask for.

Logan Ryan (Foot): Did not return

Carlton Davis (Stinger): Did not return

The Bucs, due to things outside of their control, had a very unique and challenging week of preparation. The team was displaced for their week of practice to avoid Hurricane Ian. Despite the fact that these are challenging circumstances, every team has difficulties they have to deal with, the NFL is about results and unfortunately does not have sympathy when it comes to wins and losses. Today the Bucs lost and that is what will be remembered.

Tom Brady’s record against Patrick Mahomes, as a Buc, is now 1-2. Bucs fans can rejoice that ‘the one’ is the only one that truly mattered but if the Bucs ever want to win another ‘the one’, this is not the formula.

The Bucs now sit at 2-2 on the season and are getting ready for a familiar foe next week as the Atlanta Falcons come to Tampa. The game will actually be for first place in the NFC South. Both Atlanta and Tampa come into the game with 2-2 records and Tampa has not won a game at home yet this season, we’ll see if that is a trend they can reverse in week five.