Best and Worst from the Buccaneers 13-3 loss to Tennessee 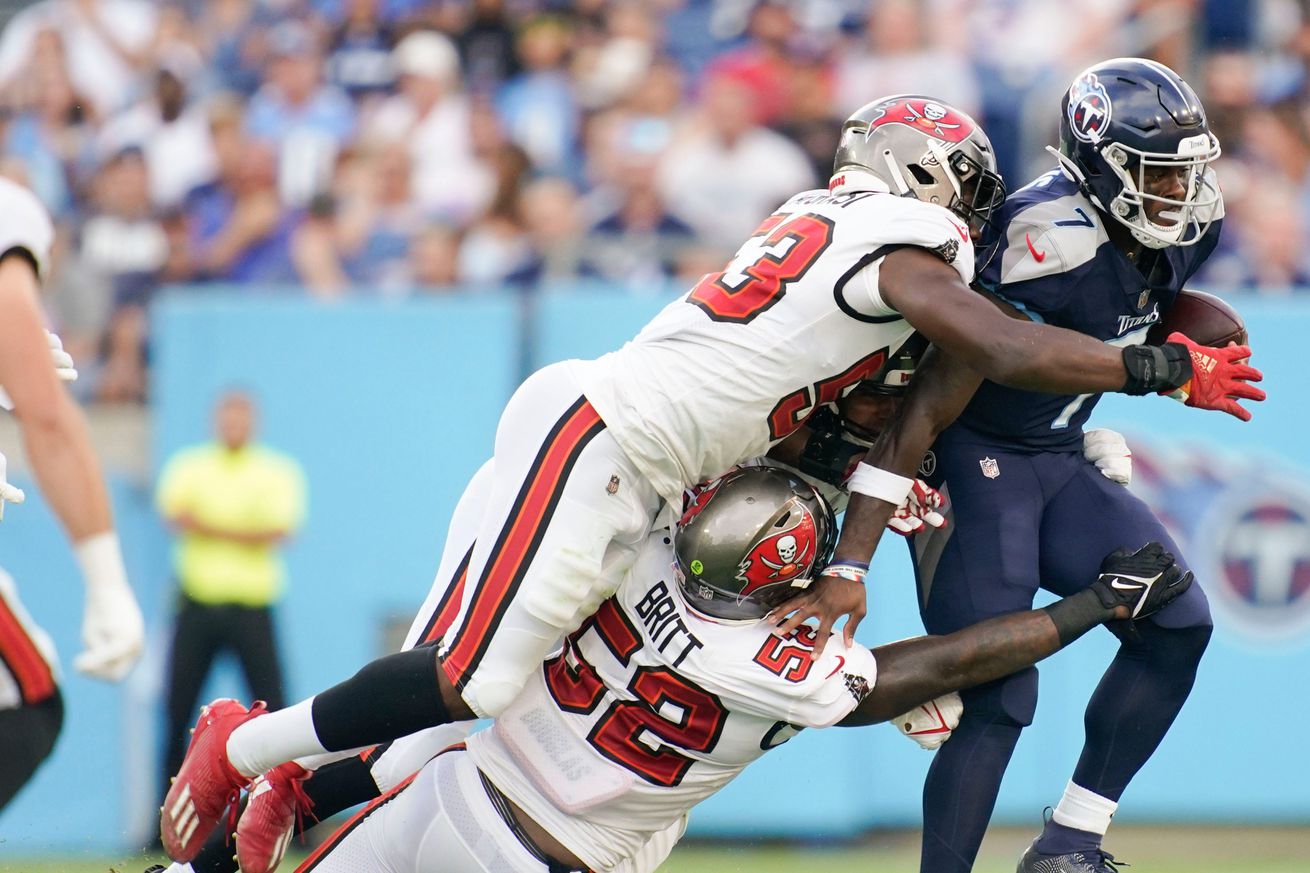 Which players stood out and which ones didn’t do themselves any favors on Saturday night against the Titans?

The Tampa Bay Bucs loss to the Tennessee Titans was, in a word, ugly. The Bucs couldn’t seem to get anything going offensively and when they did there would be a crucial mistake that stalled the drive. Now, it’s preseason so there isn’t anything to panic over – except maybe the leg injury suffered by guard Aaron Stinnie which will certainly hurt the depth along the interior of the line depending on the severity of the injury.

That said, there were some players that had a solid night while others struggled to put much on display. Here is the best and the worst from the 13-3 loss to the Titans.

Tryon-Shoyinka is adjusting to his new role as a starter, replacing Jason Pierre-Paul. The Bucs drafted him in the first round of the 2021 NFL Draft for a reason and he put those reasons on display in his limited work Saturday. Tryon-Shoyinka finished with three tackles and two tackles for loss – one of which was a hit on Titans’ quarterback Malik Willis for a four yard loss on 4th-and-2 – and he was consistently getting pressure on Willis during his time on the field. Tryon-Shoyinka looks like a player ready to take the next step and begin getting after quarterbacks in the regular season rather than just the preseason. His speed, quickness, and nose for where the ball is are going to make him a force in the upcoming season.

In a position group where around five players won’t make the Bucs roster but will end up on other 53-man rosters around the league, Thompkins is scratching and clawing his way into a roster spot. You figure the shoe-ins are Mike Evans, Chris Godwin, Julio Jones, and Russell Gage while Tyler Johnson and Scotty Miller are more than likely going to make the team. So how many spots does that leave for everyone else? Two? At most? Thompkins’ performance Saturday is another solid performance in a preseason game, as he finished with two catches on two targets for 38 yards. He’s showing his reliability when targeted and his ability to generate windows for the quarterback to get him the ball. It will be interesting to see if he can have one more solid outing before the final cuts – and how involved he can be on special teams as that’s the most likely avenue for him to make the team.

On the flip side, Geiger did himself no favors on Saturday trying to earn one of these final wide receiver spots. With two catches for two yards on five targets, Geiger dropped a touchdown pass, muffed a kick, dropped a deep pass, and fumbled. Luckily for him, the fumble went out of bounds and Bucs retained possession, but it was a full-blown snowball effect for Geiger all night long. Once one thing went wrong, everything started going wrong and he couldn’t seem to find his way out of the hole that had been dug. In a highly competitive battle within a position, no one can afford to have an off night and that’s exactly what happened with Geiger. If the Bucs can’t trust him to haul in passes that hit him square in the hands or protect the football while he’s running with it or cleanly field a kick in a game with no pressure then how can they trust him in a game with playoff implications? It was a rough, rough night for the young receiver.

Goedeke finally began getting first team reps and was given the opportunity to start ahead of Aaron Stinnie on Saturday. There were enough mistakes that made you think that maybe Stinnie is the better man to start the season while Goedeke continues to develop and he could eventually take over later on in the season. Then Stinnie got hurt and that got thrown out the window. Goedeke had two devastating holding penalties, negating big runs by rookie running back Rachaad White. He had some trouble holding his ground – as did much of the offensive line – causing Trask to be pressured which led to a few turnovers. Now, not all of the pressure Trask dealt with is on Goedeke and perhaps him being out there with the full starting offensive line will help, but he certainly didn’t invoke confidence in his ability to be the starter with the way he played against the Titans. He’ll have some work to do at practice this week before getting another shot in the “dress rehearsal” against the Indianapolis Colts.

Fatukasi was everywhere on Saturday, racking up a game high ten tackles with two tackles for loss, 1.5 sacks, and two quarterback hits. There was no question he was a player on a mission to be noticed for his great play and it absolutely worked. Another spot where it will be difficult to break onto the initial 53-man roster, Fatukasi is making it difficult for the coaches to not have him there this season.

Yes, the punter. Camarda has an absolute cannon for a leg and he got plenty of chances to show that to the staff on Saturday. Camarda finished the night with seven punts – a long of 65 – and a 50.4 yards per punt average. Mind you, one of his punts netted just over twenty yards since it bounced into the end zone for a touchback. Yes, he netted twenty yards on a punt and still finished with a 50.4 yards per punt average. Simply outstanding work from the new specialist for the Bucs.