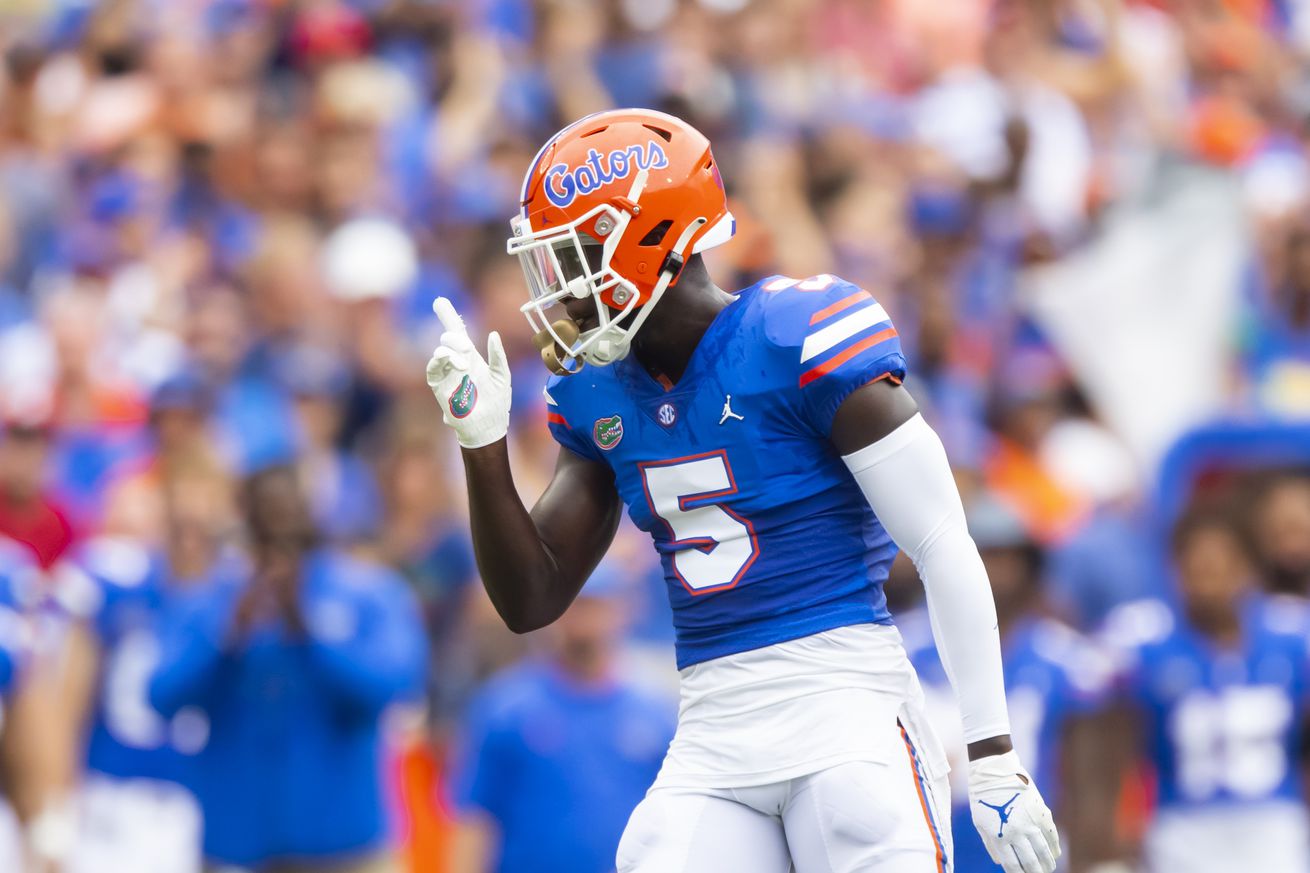 We take a look at cornerback where the Bucs have brought back Carlton Davis on a three year deal but now face Sean Murphy-Bunting and Jamel Dean who are in the final years of their deals – and Murphy-Bunting had some struggles coming off injury last season.

And though the last corner the Bucs took from Florida in the first round didn’t pan out that doesn’t mean that the 6’2”, 196 lbs standout from Gainesville could be what Todd Bowles is looking to add to his defense.

Born in Riviera Beach, Elam was a four-star recruit out of high school – getting offers from over 40 schools across the nation. After deciding on Florida, Elam immediately contributed as a Freshman. He played in eight games and while he only had ten tackles he also had two interceptions and four passes defensed. As a starter his Sophomore season, Elam got another two interceptions while increasing his passes defensed to eleven and adding in a fumble recovery to go with his thirty-nine tackles. As a Junior, Elam missed three games due to injury (knee) but he still racked up twenty-nine tackles, an interception, and five passes defensed.

Elam also had experience as a receiver allowing him to be a little more skilled when it comes to going up and getting the ball compared to many other corners in this class. And though he isn’t mentioned along with the “top three” – Sauce Garner, Andrew Booth Jr., and Derek Stingley – he has the potential to be a top level corner for the foreseeable future.

This rep from Kaiir Elam tells a story.. pic.twitter.com/eiUsJBEju4

Elam didn’t participate in all the measurables at the NFL Scouting Combine but did run a 4.39 40-yard dash.

CB Kaiir Elam going through the W drill, showing off his speed turn at the end.

Elam was watched by reps from 28 different NFL teams at his Pro Day, many of which came away impressed. However, he isn’t worried about his draft position come next week;

“I can’t control anything, I’ve just got to go out there and show my abilities,” Elam said. “I mean, I’ve just got to keep focused on getting better. At the end of the day it’s about self-improvement, so whatever a team thinks, I’m just trying to prove myself.”

Elam is a player that is already compared to Bucs’ cornerback Carlton Davis due to his physical style of play. He’s a really nice fit in Todd Bowles’ defense and would immediately compete for a starting job.

Given the complexities of the defense, Elam may not be able to start immediately but could potentially become a starter by the second quarter of the season. Not only that, but he could push both Murphy-Bunting and Dean to increase their level of play so they don’t lose their spot in the starting lineup.

Having the size and ball skill advantage over both incumbents, Elam could easily become the number two for the 2022 season and beyond. In a division where he would have to face off against big receivers like Michael Thomas and Robby Anderson, Elam’s size/speed combination would become a huge asset in the Bucs’ secondary.

% of targets resulting in a forced incompletion or INT since 2019:

NFL.com’s Lance Zierlein grades Elam at a 6.38, translating to “will eventually be a plus starter.”

Over the course of three years, Elam will be a starting outside corner and may actually develop into a team’s number one guy. For the Bucs, he would be paired with Carlton Davis for that span given Davis’ recent three year extension.

That would mean that either Murphy-Bunting or Dean – possibly both – won’t be on the Bucs’ roster anymore. With both set to become free agents, if Elam shows he can reach the potential many believe he has the Bucs will have a starting corner under a team friendly contract for the next five seasons, leading to cap savings by not bringing back one of their current players.

Elam is projected to be a first round pick and over the course of the last few weeks he’s been projected as high as number nine to the Seattle Seahawks (Emory Hunt – CBS) and as low as 31 to the Cincinnati Bengals. There were four recent mocks pairing Elam to the Bucs, including Chad Reuter of NFL.com.

The “consensus” – or, the team Elam is most often paired with – is the Buffalo Bills at pick 25, just two ahead of where the Bucs are drafting. At this point, it would be quite a surprise if Elam slipped out of the first round.

Time for you to take on the role of Jason Licht and figure out if Kaiir Elam really is that good and how important he may or may not be to the Bucs’ future. The NFL Draft is here and there are phones ringing across the league to shift and position for certain players.

Where does Kaiir Elam fall on your list of priorities?