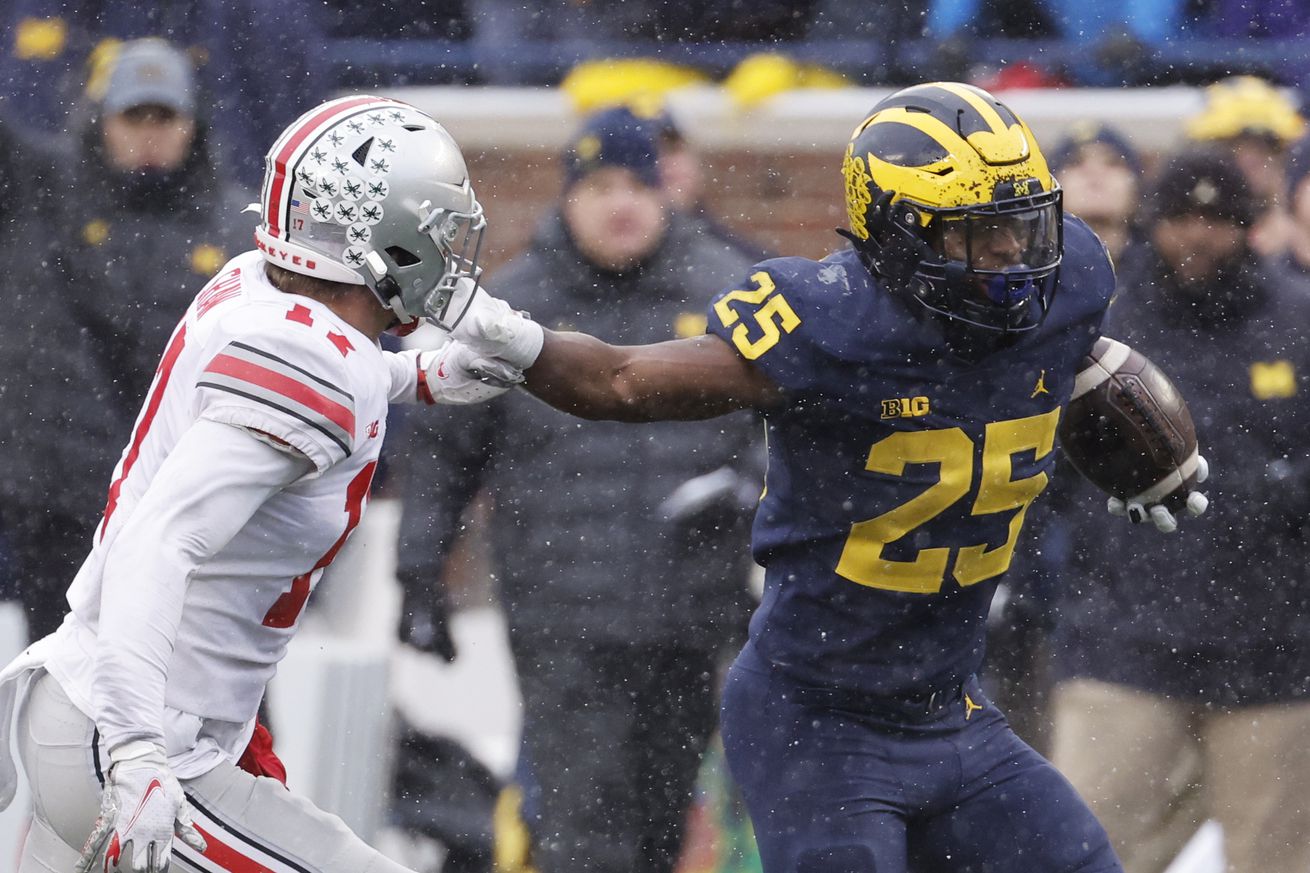 We take a look at the running back room, where the Bucs have already brought back Leonard Fournette and Gio Bernard to add to Ke’Shawn Vaughn for the 2022 season. Ronald Jones has left for the Kansas City Chiefs, leaving a vacancy that the Bucs are likely to address in the draft. With the breakout of Hassan Haskins – 6’2”, 228lbs – in 2021 with the Michigan Wolverines, he’s someone that is catching the eyes of a lot of NFL teams ahead of the 2022 NFL Draft.

Haskins, who was a three star recruit our of Eureka High School in Missouri, was recruited by a handful of school but none were as prolific as the University of Michigan who beat out places like Purdue, Ohio University, Memphis, Eastern Michigan, and Western Kentucky for Haskins’ services.

Once at Michigan Haskins had opportunities almost immediately. In 2019, Haskins played twelve games and ran for 622 yards and four touchdowns on 121 attempts. In 2020, he appeared in six games and led the team with 375 yards on 61 carries while adding six touchdowns. Then last season Haskins exploded, rushing the ball 270 times for 1,327 yards and 20 touchdowns. In 2021 he also tripled his receptions from the first two years combined to eighteen catches for 131 yards.

Here’s a video of Hassan Haskins hurdling an OSU defender to make your day better pic.twitter.com/nxbjlrVEVp

Though Haskins didn’t participate in all the drills at the Scouting Combine, he impressed with 27 reps on the bench press. He also was present, but did not participate, in Michigan’s Pro Day where projected top ten pick David Ojabo suffered a torn achilles during the workout.

WHAT HASKINS CAN DO FOR THE Bucs IN 2022

Haskins is an agile, powerful running back that is capable of wearing down defenses with his aggressive style of play. Being a rotational piece along with Fournette, Bernard, and Vaughn won’t give defensive players much of a break regardless of which back is on the field. By the second half, the bruising hits that would come from the Bucs backs would begin to create big plays off broken and missed tackles.

Haskins also does extremely well picking up blitzes and laying down blocks. This gives the Bucs some ability to disguise what they are doing by having another back in the mix that can run, catch, or block on any given play. Though his pass catching wasn’t utilized much at Michigan, he began to display his abilities in that area when given the opportunity his last season.

He would be an immediate replacement for Ronald Jones and would fit seamlessly into the rotation. The one thing he would not bring is huge, breakaway speed. Though he appears to play faster than his 4.74 40 time that he ran back in high school. He isn’t the most elusive but has put his hurdling ability on display multiple times – much like former Bucs running back LeGarrette Blount.

This run by Hassan Haskins was INSANE.

123 yards and 2 TDs tonight. What a performance pic.twitter.com/ONaxC0JZ8d

NFL.com’s Lance Zierlein is critical of Haskins, grading him at a 5.88 – labeling him as an average backup or special teams player – but in Leftwich’s offense Haskins would certainly fit well into what they want – and like – to do.

As long as Fournette is in the building, Haskins is a rotational player. However, over the course of three years, Fournette may be moving on. Though it was a three year deal the Bucs gave him, in reality it’s a two year deal with the ability to get out after 2023. So, if the Bucs like what they see out of Haskins they can save themselves a lot of money by moving on from Fournette and making Haskins the starter.

Given the similarities between the two, it’s not far-fetched to think that it’s possible this happens. The big thing would be seeing how much more Haskins’ pass-catching develops and refines over that time. If it remains as it is now, he wouldn’t be a pure replacement for Fournette. That said, he has the tools NFL teams look for in their running backs and certainly has the upside to become the lead back in a stable for an NFL franchise.

Haskins’ projection in mock drafts ranges from end of day two into day three. Kyle Edmond mocked Haskins to the Bucs in the third round back in January but over the last few weeks Haskins’ placing has been more in the fifth-sixth round range with a few mock drafts placing him in the fourth.

Time for you to take on the role of Jason Licht and figure out if Hassan Haskins really is that good and how important he may or may not be to the Bucs’ future. The NFL Draft is here and there are phones ringing across the league to shift and position for certain players.

Where does Hassan Haskins fall on your list of priorities?