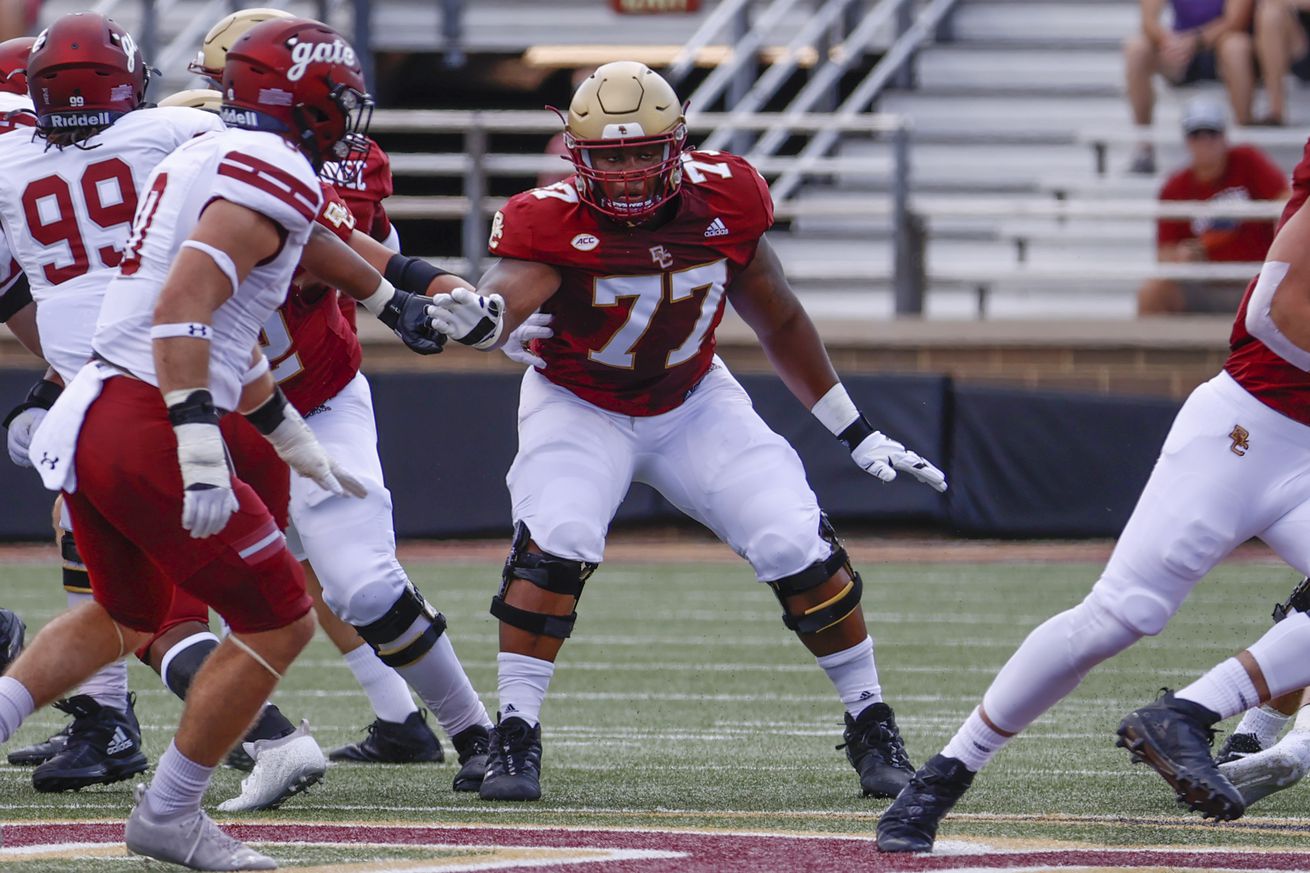 Could the Bucs swing for another starting offensive lineman in the NFL Draft?

As touched on in our Ed Ingram draft profile earlier this week, the Bucs’ immediate shift back into “win now” mode and Ali Marpet’s subsequent retirement should push the interior offensive line near the top of the draft needs list.

If the coaching staff wants one of the best players available to fill that gap at left guard, they need not look further than Zion Johnson out of Boston College.

Johnson hardly qualified as a blue chip prospect coming out of high school. Despite being a stand out for Riverdale Baptist High School in Bowie, Md., Johnson wasn’t even ranked nationally for most recruiting sites and received no FBS scholarship offers.

He fielded one FCS offer from Davidson College, which he accepted. He dominated at that level of competition in a triple-option offense, making 19 total starts in two years and earning all-conference honors.

After forcing his way into the spotlight, he entered the transfer portal and got courted by multiple Power Five programs before settling on Boston College.

He played left tackle for the Eagles in 2020 despite never playing there before, and he still earned third-team all-ACC. He could’ve entered the NFL Draft then, but he chose to return as a super senior to play a full season at left guard.

He closed out an excellent collegiate career by playing in the 2022 Senior Bowl and garnering Player of the Week honors.

A lot of pundits and analysts hyped up Johnson as someone who would dominate athletic testing, and they were very correct.

He is, without question, a very good athlete, and it shows up consistently on film. He did not perform any additional testing on his Pro Day on March 25, as he instead opted to just do positional drills in front of NFL scouts.

Johnson, as should probably be expected from a 0-star recruit who had to grind his way to prominence, reportedly impressed at the podium and in interviews at the Scouting Combine and Senior Bowl.

With his sterling demeanor and work ethic paired with his great film and athletic traits, he’ll have strong supporters in all 32 war rooms.

WHAT JOHNSON CAN DO FOR THE Bucs IN 2022

Johnson is a tailor-made starter from Day 1.

Tom Brady won’t have to worry about his Marpet replacement much if Johnson assumes that role. The latter stands out immediately as a pass protector for various reasons.

He’s got the grip strength of a grizzly bear, and he backs it up with a consistently stout anchor and hand leverage. It’s clear that he works consciously to blend the aggressiveness to finish blocks with the necessary patience to process defensive line games and blitzes. The dude is smart, technically sound, and eye-poppingly strong.

Zion Johnson is a card-carrying member of the Glass Eaters. This guy looks to establish a physical brand of football by plowing every single defender into the ground. pic.twitter.com/HokxpRLbvJ

In the run game, he can fit right into what Tampa likes to do: running lots of gap/power with some outside zone peppered in. He takes consistently good angles and plays with the balance you need to sustain and finish blocks from whistle to whistle.

He doesn’t have the quickest feet in the world, which will mean adjusting to the challenge of consistently top-tier athletes week to week. His athleticism also comes through as more smooth and than overly explosive, so asking him to be an elite run blocker is probably expecting a little too much.

That said, the tools are all there to be a quality, reliable starter right away.

Presuming Johnson steps in as the starting left guard from the get-go, that is where he will likely remain for the next three years and beyond.

He’s the type of player you “set and forget”. Most popular online scouts see it the same way, so it’d be shocking if Tampa saw this as a Joe Tryon-Shoyinka type of move: Get his feet wet in Year 1 before unleashing him in Year 2.

This is much more in the vein of Tristan Wirfs. You’re taking a known commodity with a high floor who should provide meaningful, reliable snaps for the entirety of his rookie contract.

Expecting Johnson to be an absolute superstar like Wirfs is unfair, but certainly nobody would complain if it worked out that way.

Johnson is a bonafide first-round prospect with under one month to go until Day 1 of the draft kicks off in Las Vegas. Unless he gets hurt or some significant issues arise (highly improbable), it would be shocking to see Johnson available past pick 32.

In a draft generally short on impressive interior line prospects, Johnson might be the best of the bunch along with Texas A&M’s Kenyon Green and Iowa’s Tyler Linderbaum. He might even be pushing himself into the top 20 conversation, which would obviously prove difficult for the Bucs to accommodate.

Alrighty, put on your decision-maker caps, Bucs Nation. If Tampa has the opportunity to select one of the draft’s best guards in Round 1, are you running the card up to the podium? Or should another position take precedence?