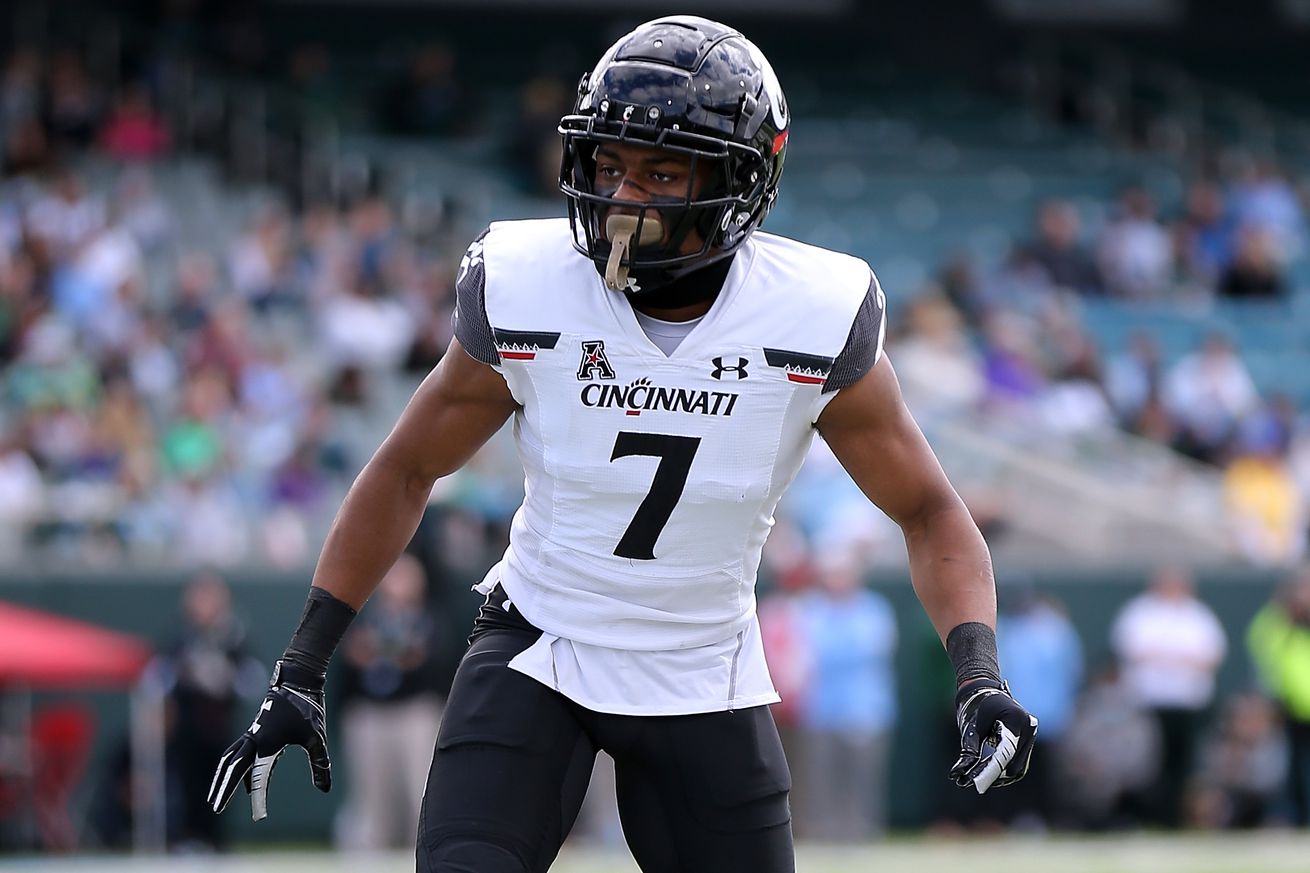 The Bucs might explore adding an heir-apparent for the No. 2 cornerback spot.

Our look at potential Bucs draft targets keeps rolling on the defensive side of the ball, as we hop back into the secondary.

The Bucs did well to retain the services of Carlton Davis, ensuring their best cornerback will remain in Tampa for the next 3 seasons. Jamel Dean, Sean Murphy-Bunting, Logan Ryan and Ross Cockrell make up the rest of a strong 2022 group, but the long-term future is far from secure.

While the need isn’t pressing, the Bucs could look to someone like Cincinnati’s Coby Bryant on Day 2 to further insulate the position.

The 6-foot-1 defensive back, named for the late NBA Hall of Famer Kobe Bryant, stood out as a corner and safety at Glenville High School in Cleveland, OH, and came into college as a 3-star recruit.

He initially fielded offers from MAC programs like Buffalo, Western Michigan, and Kent State before Cincinnati jumped into the process late. A redshirt freshman year then parlayed into a 4-year starting career, as Bryant started 50 total games and tallied some impressive stats – 45 passes defensed, 10 interceptions and 172 total tackles.

Bryant played well despite being the more targeted of the Bearcats’ cornerback duo. His partner, projected top 10 pick Ahmad “Sauce” Gardner, did not allow a single touchdown and often forced targets Bryant’s way. Last season, the latter allowed less than a yard per snap (0.93) according to PFF, which ranked third-best behind just Gardner (0.29) and Florida’s Kaiir Elam (0.56). His excellent performances garnered him the Jim Thorpe Award, given to the nation’s top defensive back.

The redshirt senior also earned first-team All-American and All-AAC, and he was team captain both years as well. Bryant did participate in the 2022 Senior Bowl, where teammates voted him top cornerback on the National team.

Bryant weighed in, ran the 40, and benched at the Scouting Combine, but he elected to do the full assortment of tests and drills at the Cincinnati Pro Day on March 24. Overall, he measured at 6-foot-1, 193 pounds with 30 ⅝” arms and a 74” wingspan, which seems close enough to Tampa’s preferred size parameters at the position.

Bryant comes into the league much more experienced than most options given his 50 college starts. That strong base, combined with his heralded work ethic and football IQ, should endear him to the coaching staff and allow to make a strong claim to the top backup spot for outside corner.

He likely will not play at all on defense unless any of the top 3 options get injured or miss time, so he’d likely need to brush up on his special teams knowledge in the meantime. He’s barely played on that side of the ball, however, with 2 special teams tackles total at Cincinnati.

SMB, Dean, Cockrell and Ryan are all free agents after this season, and Tampa likely isn’t bringing them all back, so Bryant would enter 2023 as a serious challenger for a starting spot.

He’s got some work to do before he’s ready anyway, so it would behoove him to have a redshirt year in 2022. While he’s a technically controlled, savvy player who loves playing receivers physically, his aggressive nature will get him burned without further refining his read-and-react skills. His poor change-of-direction and lack of long speed show up on film and in testing, so he’ll need to continue honing the strengths of his game to mitigate those weaknesses.

Improvement with tackling will also be paramount, as he’s more of a diver than somebody who goes for the sound wrapup – that won’t fly in this defense.

He profiles much more as a man-heavy corner right now, which the Bucs don’t love to do as much as press-zone. Not to say he’s incapable of fitting into the scheme, as he has the smarts and anticipation / reaction time, but Todd Bowles and Co. would be wise to play more mixed coverages that give Bryant those man-on-man opportunities to excel.

With his on-ball production, he would immediately present the best turnover potential of any corner currently on the roster. Bryant exhibits elite awareness and ball skills, evidenced by his 15 forced turnovers with the Bearcats. If Bryant can improve his athleticism and consistently capitalize on his strengths, there’s no reason to doubt his potential as a starting outside corner opposite Davis.

Bryant is widely regarded as a late Day 2, early Day 3 pick by most experts.

The Draft Network has a composite grade of 75.25, which grades out as a Round 3 value. Bleacher Report and The Athletic’s Dane Brugler agree with the third round evaluation. BR compares him to Josh Norman, while NFL.com’s Lance Zierlein throws out a P.J. Williams comp.

Both of those guys have been solid, long-term starters in the league, so that’s not a bad benchmark to aim for by any means.

You be the judge, Bucs Nation. Should the team explore adding Bryant as a developmental outside cornerback? Let us know your thoughts in the poll / comments below!