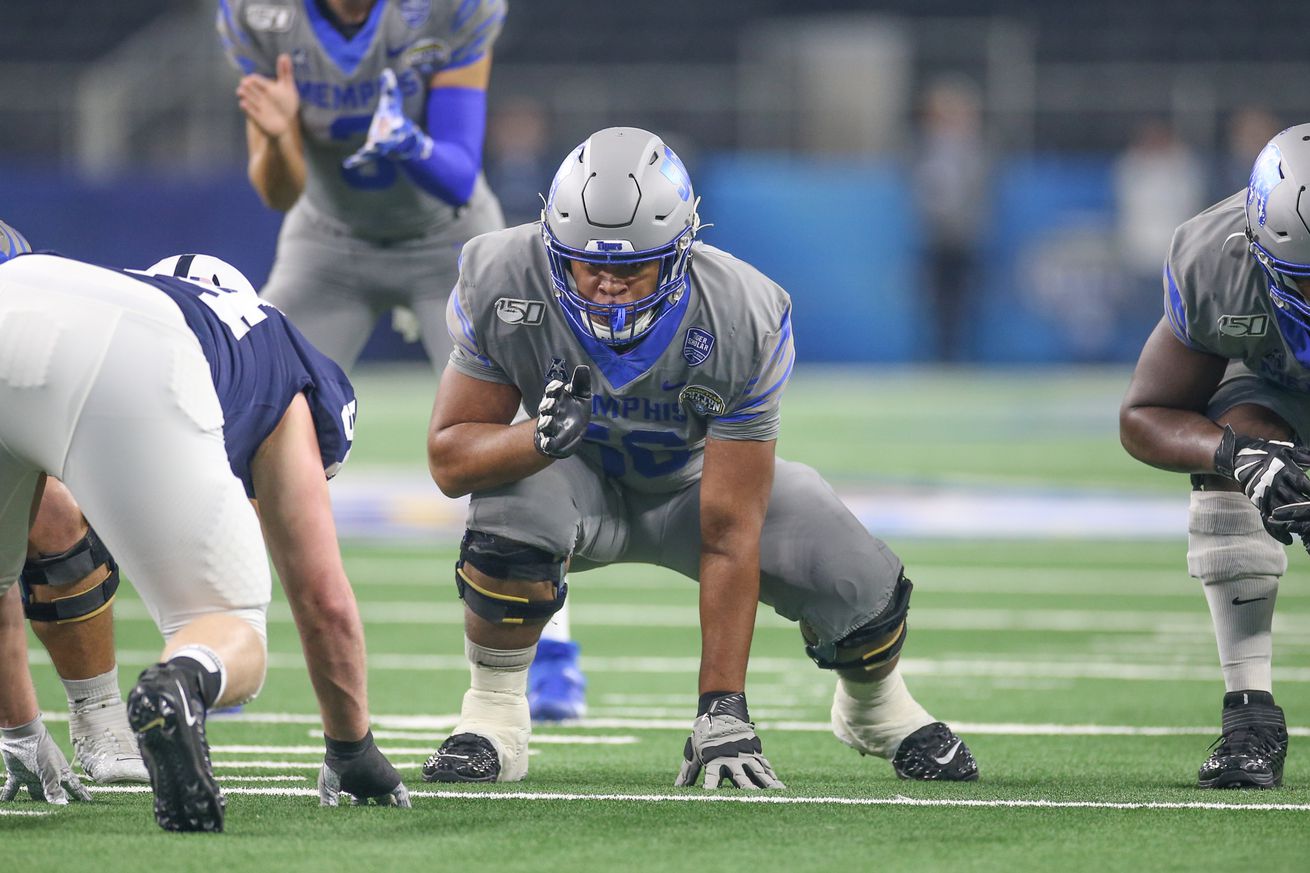 When Bucs longtime guard Ali Marpet retired, it was a shock to just about everyone but shortly after that initial feeling of surprise came the harsh reality. The Bucs suddenly had a big hole to fill along the offensive line. They were able to swing a deal with New England for Shaq Mason and brought back Aaron Stinnie, but they could still use that long term solution at left guard.

The questions Tampa Bay still has at the guard position leads us to our next player in our NFL draft profile series, Memphis Guard Dylan Parham.

Parham’s story is one of the more interesting ones in the entire draft. Originally Parham played linebacker in his junior year of high school, then played tight end as a senior. He was not recruited heavily and actually started off as a tight end on the Memphis roster before moving from the position to the offensive line in 2018. As a redshirt freshman in 2018, he started all 14 games of the season at left guard and played in 972 of 1,028 total snaps.

Parham continued his success at guard in 2019, then in 2020 he played all 11 games at right tackle. In 2021 as a redshirt senior, he would go back to guard and this time started every game at right guard and did not allow a sack all year along with allowing only two QB hits all season. Parham was invited to participate in the Reese’s Senior Bowl after the 2021 season.

Memphis lineman Dylan Parham is easily one of the players I am most intrigued by in Mobile. Really nice anchor vs. Zachary Carter here. pic.twitter.com/k07MAoVEre

Parham ran a 4.93 40 yard dash at the NFL Scouting Combine and also recorded a 4.7 20 yard shuttle as well as a 7.78 three cone drill. He also participated in both the vertical and broad jumps, recorded a 26.5 inch vertical and 10.8 inch broad jump.

While Parham played both guard positions as well as right tackle at Memphis, many view him as a future starting center in the NFL. If the Bucs determine that Parham can indeed play guard in the NFL, then he could come in and instantly compete with Aaron Stinnie for the starting left guard job and he could fill in at right tackle should Tristan Wirfs go down with an injury again.

If the Bucs view him as a center, then it is tougher to see a scenario where Tampa Bay selects him after they just gave pro bowl center Ryan Jensen a brand new three year deal. If they were to ignore that fact and draft him anyway, Parham may not be the type of player to be able to start at center immediately in the NFL anyway, so it may actually benefit him.

Assuming the Bucs view and draft Parham as a guard at the next level, he could end up being the starting left guard for Tampa Bay long term. Parham could also fill in at right guard and be the starter there if Shaq Mason was to move on since he only has two years left on his deal. Either way three years from now, there is a good chance that Parham would be playing a key role for Tampa Bay.

Parham is viewed as a mid to late second round pick. The Draft Network gave him a 2nd round grade and most of their analysts agreed. In a major coincidence, The Draft Network also compared him to current Buccaneer Shaq Mason. Perhaps they could be teammates in a few weeks.

If the Bucs want Parham, it seems likely that they will have to use their second round pick to grab him, if he even makes it that far on day two.

The time has arrived to put on your GM hat and make a decision. Should Parham be a player the Bucs should have interest in? Should they select him if he is available on day two? You are the one making the call, so what would you do?