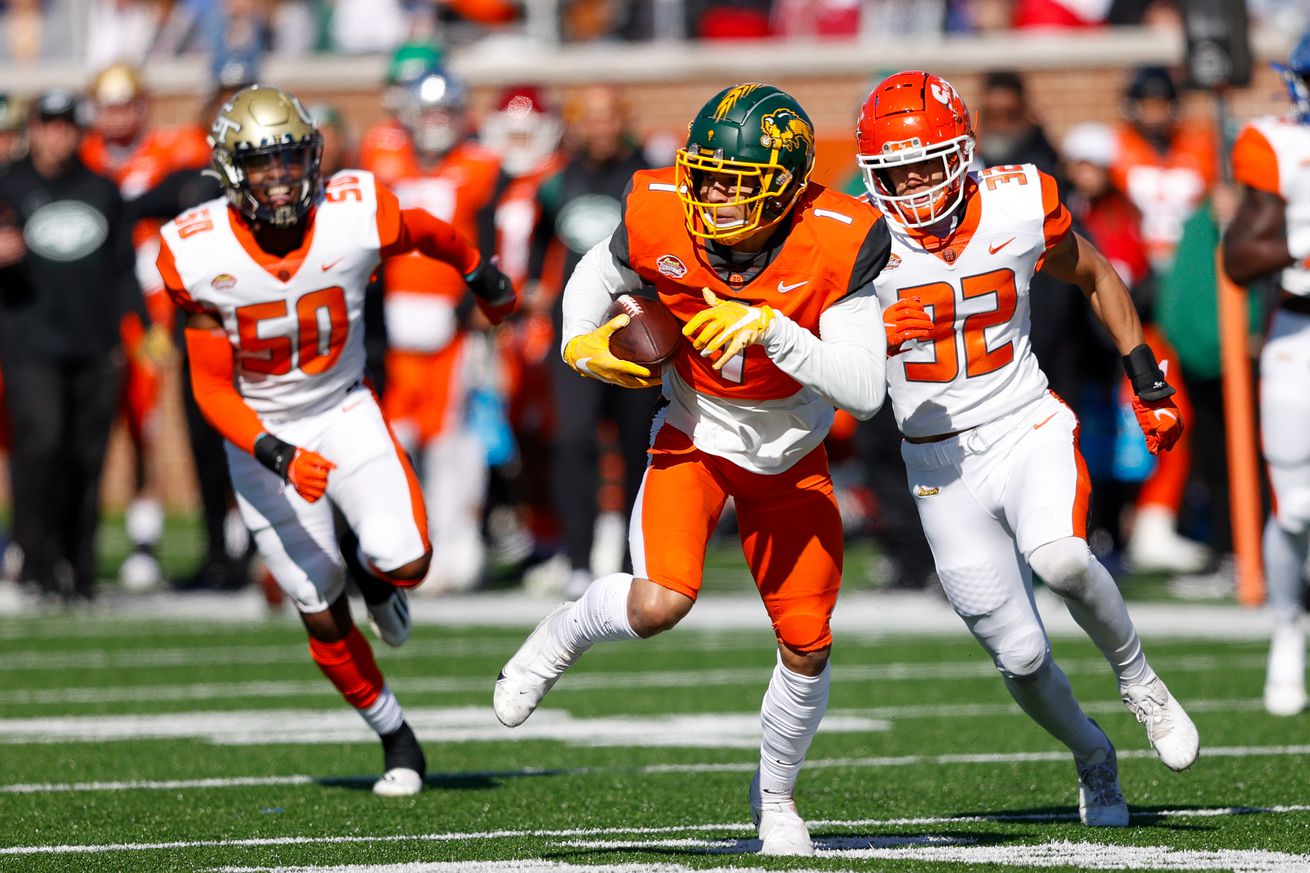 Could the Bucs bring the hometown kid, back to Tampa?

To pick just 30 out of all the talented young men about to start their NFL careers was difficult, but it’s done, and we’re starting it off with one of the hottest names in draft conversations today, North Dakota State University wide receiver Christian Watson.

The Tampa native left Plant High School for North Dakota State University as a redshirt freshman in 2017 before contributing to a national championship-winning squad in 2018.

Along the way, Watson brought in 105 receptions gaining over 2,000 receiving yards and scoring 14 touchdowns, including a career-high seven in 2021 alone.

His quarterback, Trey Lance, was a first-round selection by the San Francisco 49ers in the 2021 NFL Draft.

His amateur career ended with an appearance at the 2022 Reese’s Senior Bowl where he looked like arguably the best receiver on the field during the week, especially during Day 2 of practices which were impacted by heavy rainfall.

Clocking in at 4.36, the 6’4 wide receiver who said he models his game after Bucs wide receiver Mike Evans had the sixth-fastest time in his position group while also boasting the sixth-best vertical at the NFL Scouting Combine, again among wide receivers.

NDSU’s Pro Day this year was the second-most attended in the schools history, trailing only last years when quarterback Trey Lance was coming out and eventually became the third player taken in the 2021 NFL Draft.

While there are other talented prospects coming out of the school, the majority of attendees were there for Watson, and he didn’t disappoint.

His shuttle and three-cone times at the pro day would have placed him third in his group at the scouting combine.

Who knows if Tom Brady will play beyond this season? And if he does, who knows if the 2023 free-agent quarterback will do it for Tampa Bay?

All we know is the Bucs have Brady back for another season, and they’re looking to win another championship.

So, how can Watson contribute?

In the simplest form, he provides a solid mixture of what star wide receivers Mike Evans and Chris Godwin bring separately.

Watson brings size and length similar to what Evans possesses but is faster and more dynamic, like Godwin.

All three have solid hands, and Watson proved to be a better route runner than many anticipated prior to the Senior Bowl.

A lot of us have been on the lookout for an Antonio Brown replacement, but perhaps the Bucs choose to turn to a third receiver that doesn’t live and die off quickness and speed but can win with his legs, and with physicality.

Plus athleticism without the burden of being the top guy in an offense with mentors like Evans and Godwin – oh yeah, and Brady – adds versatility and yet another mismatch possibility on an offense that’s already unfairly equipped to defeat any NFL defense.

Watson is looking like a Day 2 lock and is getting some growing Day 1 buzz ahead of the NFL Draft.

Any team taking a player in that range is anticipating that young man turning into a starter, eventually.

NFL.com draft analyst Lance Zierlein gives Watson a numerical grade of 6.21 which classifies him as an eventual starting-caliber receiver.

In three years’ time, Chris Godwin’s new deal will be expiring and Mike Evans will be 31 coming off of yet another successful season as a Bucs playmaker.

Keeping the three together becomes easier with Watson on a rookie deal still, but with Godwin’s next deal projected to be even bigger than the one he just signed, Tampa Bay figures to have a good problem on their hands when deciding how to proceed with their wide receiver group.

In January, Watson was a high upside prospect who would likely sneak into the back end of Day 2, likely in the compensatory picks tacked on to the third round.

Now, it’d be quite a surprise to see him get through the second round without a team taking him off the board, and he’s a prime candidate to land in the back end of Day 1 with the Kansas City Chiefs becoming a team with growing speculation after trading Tyreek Hill to the Miami Dolphins.

Make the decision. There are a few needs for the Tampa Bay Bucs in this year’s NFL Draft, and Christian Watson may be testing his way right into the gap between the team’s Day 1 and Day 2 picks.

Vote in the poll, let us know what you think of North Dakota State University wide receiver Christian Watson, and stay tuned for 29 more NFL Draft targets for your Tampa Bay Bucs and our final mock draft from Mike Kiwak dropping the first morning of draft day!