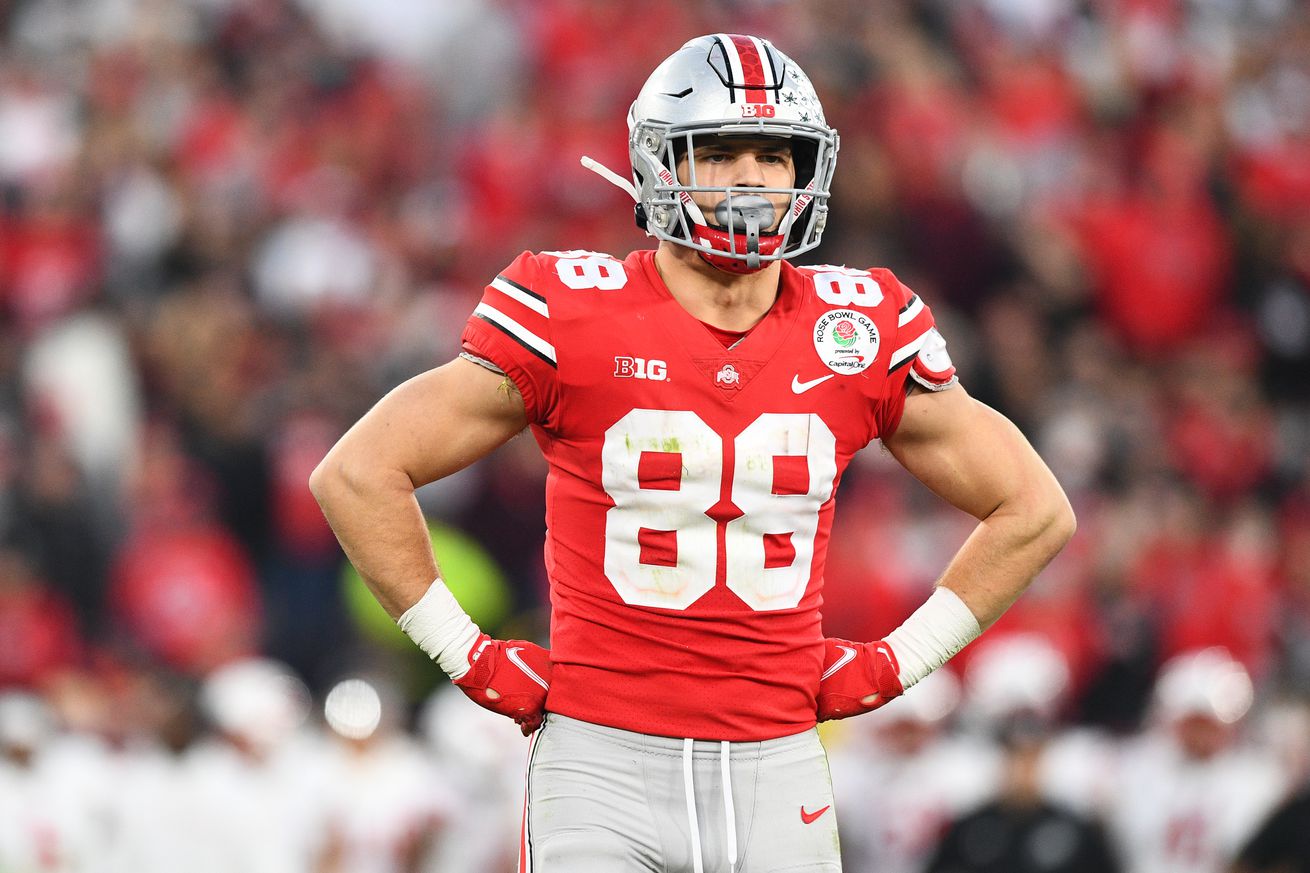 With Gronk still out there as a free agent and O.J. Howard gone, the Bucs have a need at Tight End

To pick just 30 out of all the talented young men about to start their NFL careers was difficult, but it’s done, and now we turn our attention to someone who can come in and help the depth of the Bucs Tight End position, Jeremy Ruckert out of Ohio State

Jeremy Ruckert unfortunately did not get many pass-catching opportunities while at Ohio State. During his four years with the program, Ruckert would only see a combined 54 receptions, 615 yards, and 12 touchdowns due to the high-powered rushing offense Ohio State ran during Ruckerts time there. However, where Ruckert shined in Ohio States’ offense was his blocking capabilities and was a large contributor to Ohio State having one of the most impactful rushing attacks in college football.

Jeremy Ruckert only participated in the bench press while at the NFL combine. However, he posted a very impressive 19 reps on the bench press, while also posting measurements of 6’5 height, 250 lbs in weight, 32 and 3⁄4 inch arms, and 10 and 1/8 inch hands.

WHAT RUCKERT CAN DO FOR THE Bucs IN 2022

Ruckert is very much slept on in this upcoming NFL Draft and I feel the ability and skills that he has would a perfect complement to the Bucs offense in 2022. With Ruckert’s blocking ability at minimum would make him the number two TE in Tampa where would be able to contribute to a run game that has been improving steadily each season under offensive coordinator Byron Leftwich. However, Ruckert also has very good receiving skills as well that he was not able to showcase much during his time at Ohio State. This means that Ruckert could fill in very well as a second receiving option next to a veteran starting TE or Rob Gronkowski (If he returns from retirement), or could very well give you meaningful full starting snaps as well due to his range of abilities and versatility.

Jeremy Ruckert I believe has all the tools to be a starting TE in the NFL and a good one at that. In a three-year outlook through my crystal ball, I see Ruckert as the starting TE for the Bucs and a good one at that. Again Ruckert has showcased excellent blocking ability at a high level with receiving abilities that are good enough to make him a consistent starting for the Bucs in as early as his rookie season. Given the idea that if Rob Gronkowski comes back it would likely be his last season, Ruckert would slot into the starting TE position during year number two and hold onto the position in year number three. Regardless of who is the offensive coordinator in a couple of seasons be it still Byron Leftwich or someone new, Ruckert would figure into any offense in a major way as a starter one way or another.

The stock of Jeremy Ruckert has been consistent with him being taken in the third or fourth rounds of this upcoming NFL Draft with some speculating he could be selected late in the second round. I agree with the placement of Ruckert but also feel he is being undervalued in the upcoming draft. Ruckert has the skills and ability to be a very solid mid-round draft pick for any team who needs at the TE position and that certainly includes the Bucs.

I think that it is paramount that the Bucs draft a TE in the upcoming NFL Draft. With the team losing O.J. Howard in free agency and the pending retirement of Rob Gronkowski either this season or next, it’s time for the Bucs to inject the position with some new youth and you will not find many better prospects in this draft than Ruckert who figures to be a solid fit in the Bucs offense and an eventual or even current starter that could contribute right away.

Let us know Bucs Fans, what do you think about the possibility of the Bucs drafting Jeremy Ruckert.