Buccaneers on the Bubble: Preseason Week 1 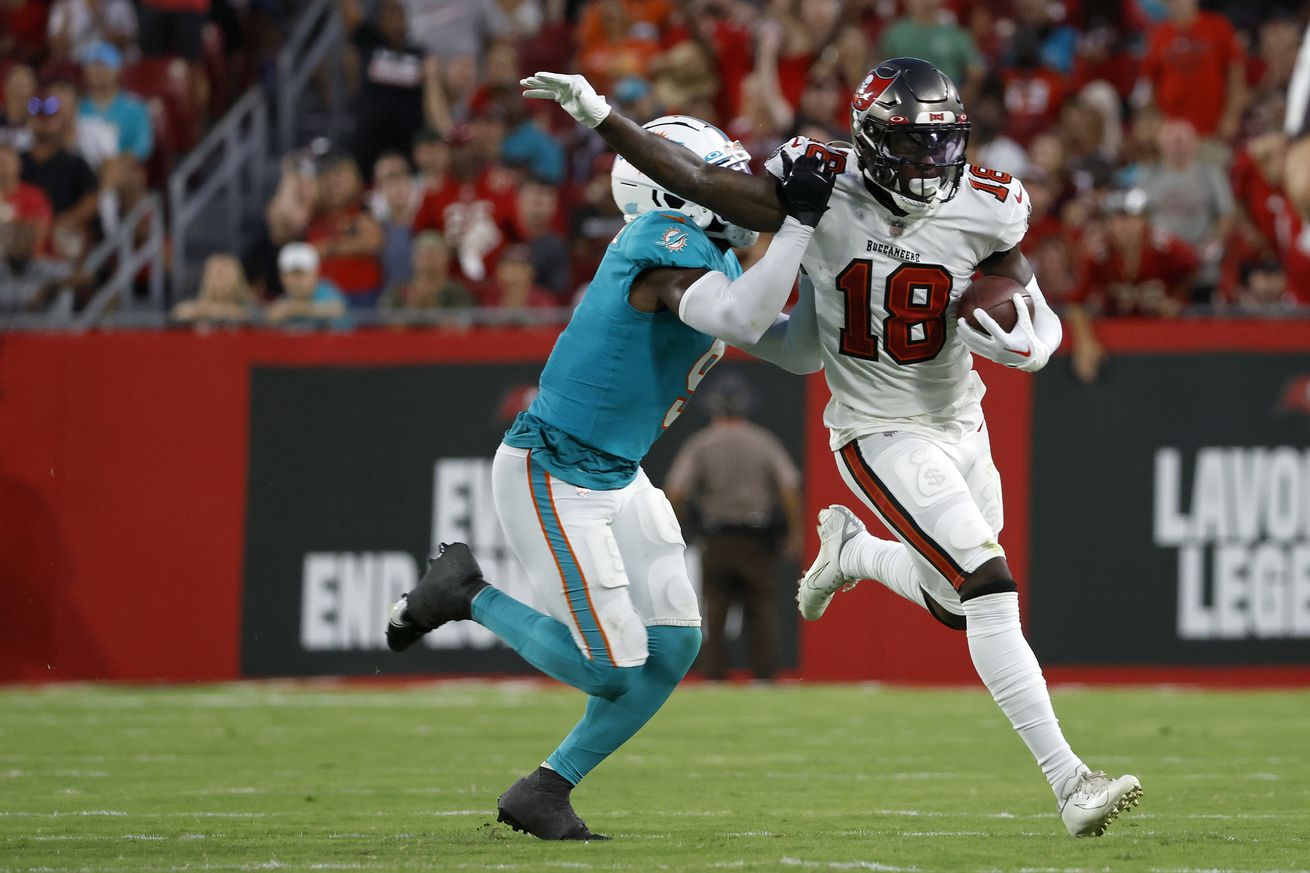 While they generated a good amount of excitement (for a preseason game anyway) and received some standout performances, the Bucs fell just short of a comeback against the Miami Dolphins Saturday night, losing 26-24.

Every prominent starter took the night off, but several key battles for depth played out as fringe players fought to stay off the bubble. With first roster cuts looming on Tuesday, 5 players will need to go.

So who made a case to stick around and who fell short? Let’s analyze.

Players who helped themselves

WR Tyler Johnson – Johnson clearly understood his standing with the team was unsteady entering camp, and to his credit he has responded wonderfully. He’s a player who might’ve guaranteed his roster spot after dominating the Dolphins for the entire first half.

His first catch across the middle netted 12 yards, as he eluded multiple defenders for YAC. He then made an excellent over-the-shoulder grab for 21 yards, then pulled in a great contested catch, broke a tackle and created a big gain of 22 yards. Overall, he finished with 6 receptions for 73 yards in the two quarters of action.

This will likely be the one and only time you see him on this list, and that’s a good thing.

WR Jaelon Darden – Darden didn’t get any return attempts, which was largely how he was expected to contribute last season, but he did record a 23-yard TD catch from Blaine Gabbert. Any meaningful contribution should help to keep him in the good graces of the staff.

WR Jerreth Sterns – Yup, yet another wideout. Sterns might’ve contributed the most meaningful catches of the evening, from an outcome perspective. He and Kyle Trask first teamed up for a pretty touchdown that showed off Sterns’s concentration and strong hands.

What a dime and what a snag.@ktrask9 and @jerrethsterns team up for 6!

He also made a key third down grab, and then he got open to a convert a 4th and 12 on the final drive. Overall, he made 4 catches for 51 yards and the score, making him the second-most productive receiver behind Johnson.

TE Ko Kieft – Kieft knows why the team selected him in the NFL Draft earlier this year – to manhandle people. He takes his blocking assignments seriously, as he helped spring Rachaad White on a 12-yard run and even served as the lead blocker for Ke’Shawn Vaughn on his 1-yard touchdown.

#Bucs TB Ke’Shawn Vaughn on the lead block of rookie @KoKieft on his 1-yard TD: “I’ll follow him. Just watching him at practice go head-up with guys, you know you can trust being behind him as a lead blocker.”

Kieft impressing as an extra blocker both in-line and potentially as a fullback would make him an underrated asset who has a clear lane to a roster spot. He made a strong case to stay off the bubble and on the 53-man.

LB Olakunle Fatukasi – When Grant Stuard left early due to a hamstring issue, it served as a ripe opportunity for both J.J. Russell and Fatukasi to leave an impression. The latter made a significant one, as he led the team in tackles with six and even logged a pair of third down stops.

A noteworthy caveat here is that Fatukasi looks noticeably more comfortable as an actual linebacker than Stuard, whose primary value lies on special teams. Fatukasi flew around the field and looked even better than K.J. Britt, who started and wore the green dot but recorded just one tackle.

Players who failed to stand out

S Chris Cooper – Cooper has bounced around the league since 2018, spending time with six franchises. He lived on Tampa’s practice squad last season, and he returned looking for a backup safety/special teams role.

On defense at least, that continues to look unlikely. He badly missed a tackle that allowed for a huge third down, and that drive eventually led to 3 points. He missed another tackle as well.

He was outperformed by rookie Nolan Turner, who started the game, flashed strong instincts and made some sound tackles.

WR Scotty Miller – He didn’t start the game, he didn’t record a catch, and other receivers showed out better than him. Miller isn’t getting cut Tuesday, but he needs to put together some better outings here if he hopes to stick around.

After being hurt and falling out of favor last year, his place on the roster is officially in jeopardy.

WR Cyril Grayson Jr. – Grayson was a ghost. I had to double check and make sure he even played. Given how he stepped up in late 2021 before getting hurt, it’s disappointing to see him get passed over by literally everyone else he’s competing with.

He’s worked hard to become more than some random guy who’s really fast, but he’s older than almost every other receiver on the roster (turning 29 this year) and he’s not as natural of a pass catcher as younger guys like Sterns or Johnson.

RB Kenjon Barner – It’ll sound harsh, but it’s the honest truth – why is Barner here? He’s been on and off the roster in various ways the last couple years, so the familiarity aspect is comprehensible, but he’s failed to be productive as a runner or returner in his time with Tampa.

Saturday proved no different, as he got no return opportunities and touched the ball 9 times for 31 yards, which is a 3.4 average. Looking at strictly the run game, he gained 18 yards on 7 carries.

The rookie White looked much more dynamic as a runner, receiver and returner. Vaughn notched a score and made some nice short-yardage runs. Gio Bernard didn’t wow but he’s proven to be a much better pro than Barner has ever been.

Right now, Barner makes sense as a late-game snap sponge and not much else. Said snaps would be better given to a rookie or other young player that intrigues the front office instead.

S Ross Cockrell – Cockrell has given the team some quality snaps over the past couple years as a depth player and emergency fill-in, but it’s pretty clear the end of the road is near. The team moved him to safety, but he’s lost a step and looked slow even against Miami’s backups. He allowed an early third down completion where the receiver simply ran past him.

With younger, more promising talent on the horizon, Cockrell may very well be watching Bucs games from home next month.

LB Grant Stuard – Injuries suck no matter who we’re talking about, and you hate to hold it against guys, but they need to be considered. Stuard tweaked his hamstring early in the first half and got robbed of a precious opportunity to prove he’s more than a special teams wildcat.

As mentioned, Fatukasi looked very good and much better as an actual linebacker than Stuard. Hopefully 2021’s Mr. Irrelevant can recover quickly and continue to state his case.