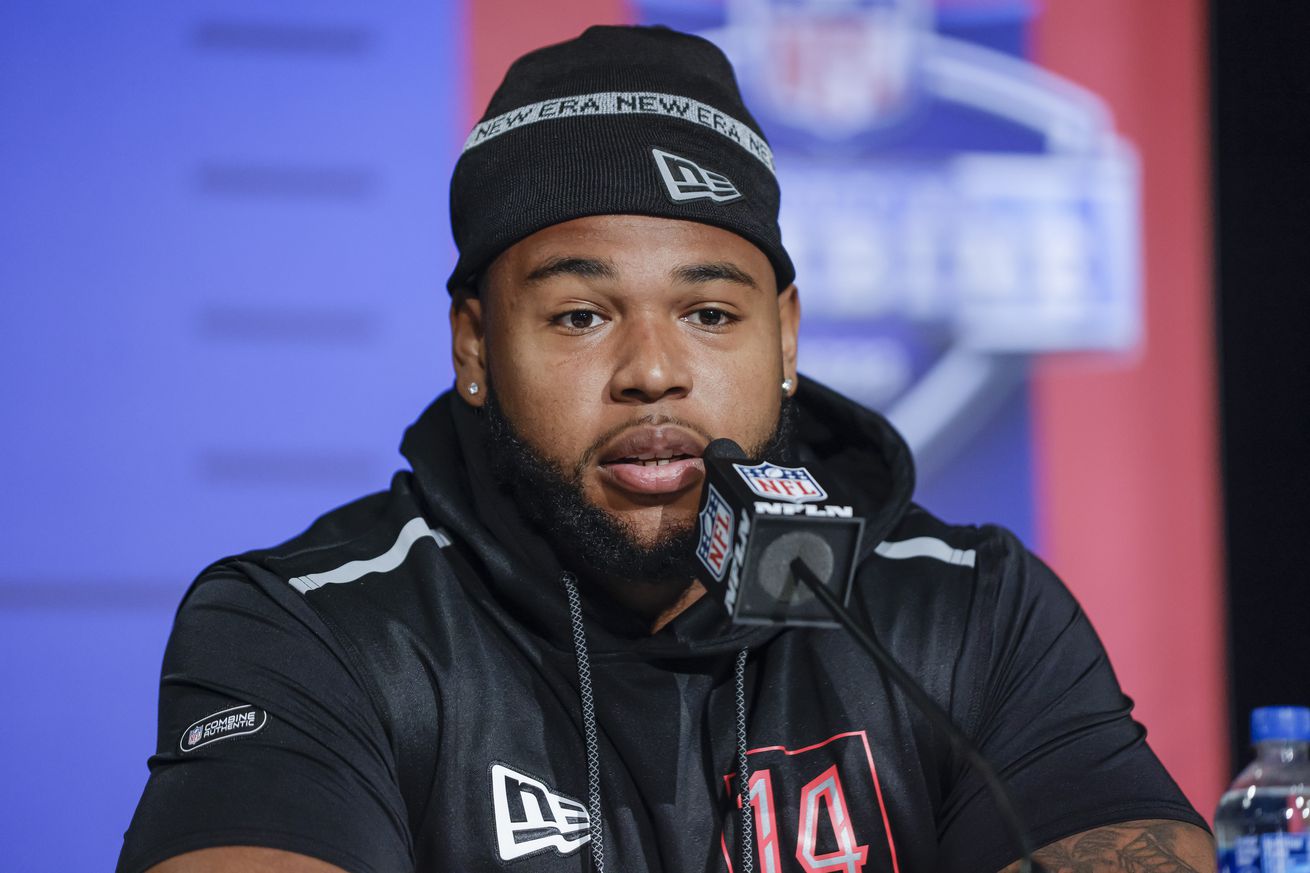 Might Tampa Bay look to add a top-tier run stopper to its already-potent run defense?

If there’s one position where the Bucs are lacking depth at this stage in the offseason, it might be the defensive line. While there could still be some free agency moves on the horizon, it would be a good bet to think the team will address its defensive front in the NFL Draft later this month.

Some mock drafts have Tampa Bay selecting a defensive lineman as early as its first-round pick (No. 27 overall). In fact, the odds for Jason Licht making a first-round pick at that position might be better than they would be for any other position on the field. So, who’s in play for the Bucs if they were to use their first selection on another crucial piece to play alongside Vita Vea?

At the top of the list is the national title-winning duo of Devonte Wyatt and Jordan Davis out of Georgia. But one of the men close behind them—and the one we’re focusing on today—comes from a program that’s far from the forefront of the college football world. That man would be Travis Jones, an inside defensive lineman from UConn.

After playing on both the offensive and defensive lines at Wilbur Cross High School in New Haven, Connecticut, Jones was a composite three-star recruit (per 247 Sports). Some schools wanted him to play guard at the next level and he originally committed to Rutgers, but he ultimately chose to sign with UConn as a defensive tackle. He chose the Huskies over Rutgers, Boston College, Buffalo and Temple, and it led to an impressive career—if not a lot of winning.

Due to the COVID-19 pandmic, UConn didn’t play its 2020 season. However, Jones came back better than ever in 2021. As one of the team’s captains, he finished with 47 tackles, 7.5 tackles for loss and 4.5 sacks. The Huskies finished 1-11 once again, but Jones’ excellent play earned him an invite to the Senior Bowl. In Mobile, he capped off his collegiate career with an impressive week, one that earned him acknowledgement as National team’s best defensive tackle and plenty of attention from NFL teams.

Physically, Jones is impressive. At 6-foot-4, 325 pounds, he’s a massive presence on the defensive line. His size projects well at the NFL level, and his strong upper body is going to help him as he continues to develop as a pass rusher. Just look at his spider graph and you’ll get a good look at how he measures up against other defensive tackles:

The Bucs were at Jones’ Pro Day on March 23, though he didn’t retest and instead stood firm on the numbers he posted at the Combine. Nonetheless, teams got a good look at the big defensive lineman’s speed and power as he completed the pre-draft trifecta of the Senior Bowl, the NFL Scouting Combine and his Pro Day.

DT Travis Jones was MOVIN’ at the @UConnFootball Pro Day, showing off his First Round potential

A small sample size of the quick burst/power of UConn DT Travis Jones who performed positional drills at his pro day workout. He’s a legitimate potential first round pick.

Philosophically, Jones fits the Buccaneer mold well. He played both three-technique and nose tackle in UConn’s 4-3 defense, developing into a dominant run stuffer. Of course, Tampa Bay is one of the league’s very best at stopping the run, so it’s easy to see the former Husky standout making an impact right away as a rookie. His role in 2022, though, would largely be determined by what—if anything else—the Bucs do with their defensive line in free agency.

Tampa Bay already brought Will Gholston back to play on one side of Vita Vea, but whether or not Ndamukong Suh re-signs and fills back in on the other side of the big nose tackle remains to be seen. When Todd Bowles was promoted to head coach at the end of March, it sounded like Suh was interested in a return. Bowles even made reference to the team needing to make sure it had enough money for the veteran before going out and signing anyone else. But we’re entering the later stages of April and no deal is done, so we’re in a wait-and-see mode.

If Suh doesn’t return, Jones likely has the size, speed and physicality to step in and be a quality starter right away. He isn’t a fully developed pass rusher, but he possesses solid upper body strength and some rush moves that give him a strong foundation to work with. And his ability against the run will allow him to fit right in with the Buccaneer defense as well. Now, if Suh does come back for another year, Jones would give Tampa Bay a quality rotational piece, plus he would get a chance to learn from quite the mentor until eventually taking over for him, perhaps in 2023.

Outside of Vita Vea, who signed a contract extension through 2026, the future of the Buccaneer defensive line is the furthest thing from settled. Assuming Ndamukong Suh does return, he’ll be 36 next January. William Gholston, who is a free agent again in 2023, will turn 31 this summer. Rakeem Nunez-Roches and Pat O’Connor are both free agents again in 2023 as well, while the rest of the defensive linemen on Tampa Bay’s roster are too unproven to currently factor into the future. So, the state of the defensive line as soon as 2023 is extremely unclear.

Considering all of that, Jones would become a second long-term piece to lock in alongside Vea. If the Bucs were to select him with the No. 27 overall pick, they’d have the important fifth-year option on his rookie contract. Even assuming they eventually trigger that option, the team would have him and Vea both signed through 2026. That’s presumably not a bad foundation to build the rest of the unit around.

As valuable of a run stuffer as Jones can be, he has the tools to potentially become a pass rushing force as well. The Tampa Bay coaching staff has proven it can develop defensive linemen. Not too long ago, it was being said that Vea needed to contribute something more to the pass rush. These days, he’s doing just that, often eating up multiple blockers as he collapses the pocket. Gholston has gotten better as a pass rusher under this coaching staff as well. So, under this coaching staff, you can see Jones becoming a more well-rounded player within a few years.

Jones is in the range where he could be selected late in the first round or slip to the early part of day two. The Draft Network’s analysts gave him a consensus grade of 81 out of 100, which translates to a second-round value. Dane Brugler of The Athletic projects him as a first- or second-round pick, ranking him No. 34 overall in his 2022 NFL Draft Guide.

Jones’ NFL Mock Draft Database profile shows that he is only being selected in the first round in 8.3% of mocks, though several—including one from NFL.com’s Lance Zierlein—have him as the Bucs’ pick at No. 27 overall. He’s unlikely to last until pick No. 60, so if Tampa Bay wants him, it will have to use its first-round selection on him. Jason Licht could also explore the possibility of trading back in hopes of acquiring more picks and still potentially landing him, though there’s obviously risk involved there.

OK, Bucs Nation, it’s time for you to make the decision. Do you like Travis Jones as a potential target for Tampa Bay? Give us your answer by voting in our poll and discussing your thoughts in the comments down below.