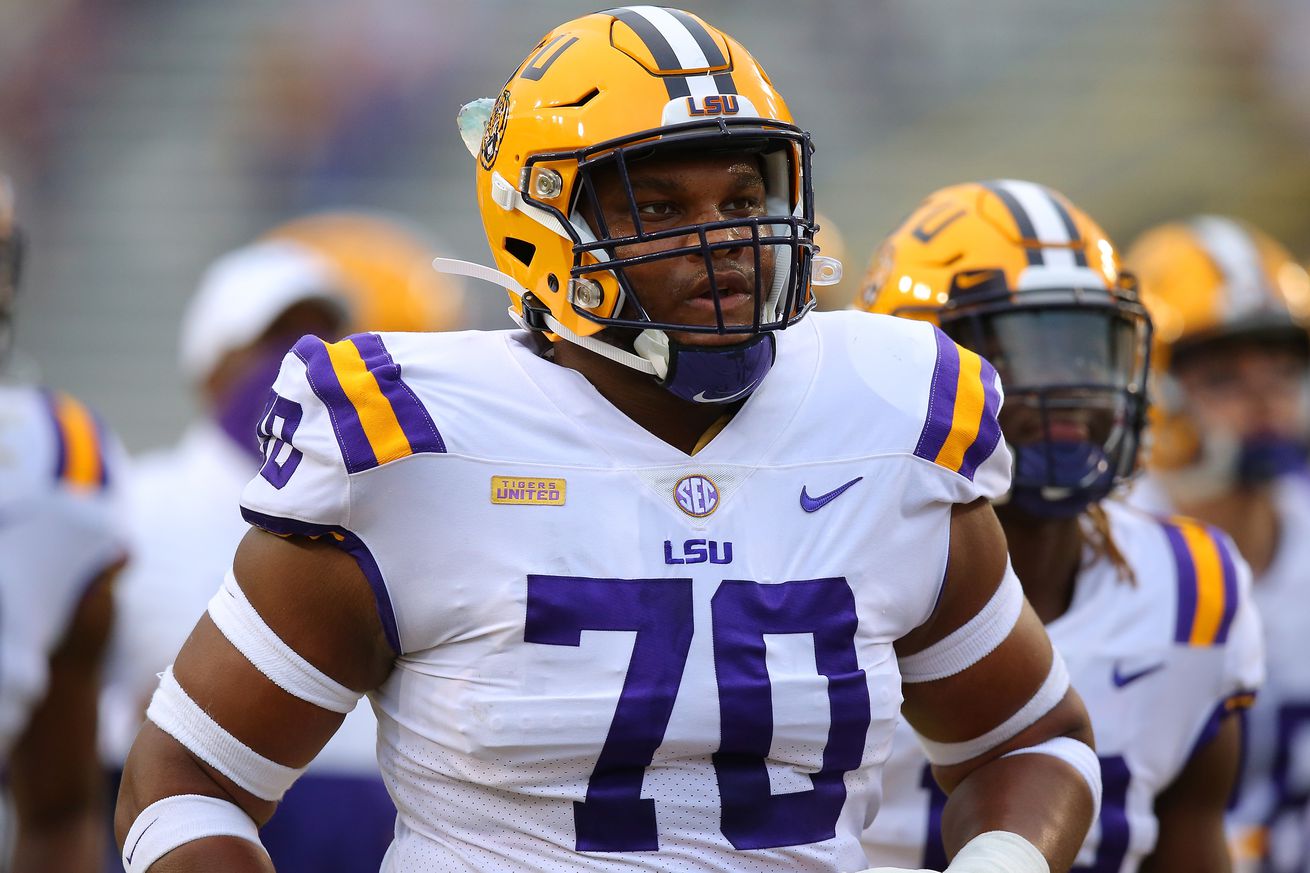 Today’s draft profile focuses on a guy who could provide depth for Tampa Bay’s offensive line in 2022 before potentially growing into a starter.

If the Bucs’ plans for the 2022 NFL Draft changed when Tom Brady announced his retirement in February, they then changed again when the seven-time Super Bowl champion quarterback unretired in March.

Now, with Brady back and the team still in “win-now” mode, Tampa Bay heads into April’s draft needing both impact players and guys who can play key depth roles in 2022 and in the future.

Of course, when Brady is your quarterback, protecting him has to be priority one. Jason Licht has done his best during the last month to counteract Ali Marpet’s surprise retirement and Alex Cappa signing with the Bengals, but depth on the interior of the team’s offensive line may still be a need in April’s draft.

So, with that in mind, our draft profile series rolls on today with a look at offensive guard Ed Ingram out of LSU.

A four-star recruit (per 247) and Scout’s No. 3 overall prospect in Texas coming out of DeSoto High School in the Class of 2017, Ingram chose LSU over a host of other schools, including Alabama, Georgia, Texas A&M, Texas and Oklahoma. He quickly cemented his place on the Tigers’ offensive line as a freshman, playing in 13 games and starting the last 12 of the season.

Before the 2018 season, Ingram was arrested in Dallas County on two felony counts of aggravated sexual assault of a minor, with the incidents allegedly occurring when he was 16 years old. He was subsequently suspended for all of the 2018 season, and his suspension lasted into the 2019 season before he was reinstated when the those charges were ultimately dismissed.

It took him a while to return to his spot on the Tigers’ offensive line, as he played in 12 games—but only started two—upon his reinstatement during the team’s undefeated 2019 season. He was forced into action early in LSU’s College Football Playoff Semifinal win over Oklahoma and played 68 snaps in that game before going on to play a part in the Tigers’ win over Clemson in the College Football Playoff National Championship Game a couple of weeks later.

Ingram started nine games during the COVID-shortened 2020 season, playing 722 snaps (the third-most among LSU linemen). Then, taking advantage of another year of eligibility, the 6-foot-3, 307-pound guard returned in 2021. After being named to the Outland Trophy Watch List ahead of the season, he started all 11 of the Tigers’ games and earned himself a spot on the SEC Coaches’ All-SEC Second Team at the end of the year.

Over his four seasons at LSU, Ingram played in 45 games—starting 34—and helped the program to its first championship since 2007 while playing on one of the best offenses in college football history. He then went on to participate in the 2022 Reese’s Senior Bowl, where he was one of the standouts of the week.

At the NFL Scouting Combine, Ingram ran the 40-yard dash in 5.02 seconds, ranking him 14th among all offensive linemen and sixth among interior linemen. He didn’t bench, which perhaps magnified the fact that he was less than impressive in the vertical jump and broad jump measurements. To make matters worse, his times in the three-cone drill and the 20-yard shuttle were also subpar. Overall, his measurables aren’t going to wow anyone.

During his interviews in Indianapolis, Ingram was surely asked at length about the legal trouble he found himself in a few years ago. While the sexual assault charges against him were eventually dismissed, they did cost him 14 months of his time at LSU. Coaches, general managers and other team decision-makers are surely going to want some clarity on the situation, especially considering the lack of public details regarding the case. Allegations that serious can’t be glossed over.

As much as Senior Bowl Week raised Ingram’s profile, it’s hard to imagine his combine performance moving the needle much in his favor. LSU’s Pro Day is scheduled for April 6, so he still has time to boost his stock a little more ahead of the NFL Draft.

What stands out the most about Ingram is his versatility and dominance in pass protection. He played both guard positions at LSU, and The Draft Network’s Keith Sanchez noted in his player profile that Ingram may even project as a serviceable tackle if he’s ever needed in that role. From the TDN expert’s analysis:

“Ingram’s versatility comes with his combination of size, strength, and athleticism. Has the overall body mass to play guard but also has the length to play tackle. Throughout his evaluation, Ingram showed the strength to be a reliable run blocker and the quick feet and reactionary athleticism to be a dependable tackle in the NFL.”

Sanchez, as well as NFL.com’s Lance Zierlein, noted pass protection as a particular strength of Ingram’s, with Zierlein specifically making mention of the player possessing an “upper-body twitch” that helps him handle gap shooters. His instincts and football IQ are big themes when evaluating the positives that Ingram possesses, especially when it comes to identifying stunts and blitzes from the second level of the defense.

So, with the Buccaneer offensive line essentially set for 2022, Ingram actually fits the team’s immediate needs quite well. Tampa Bay is sure to be looking for versatile depth—which Ingram can provide—and top-tier protection for Brady—something else the former LSU Tiger can provide. Zierlein’s profile on Ingram included the following:

“…teams with patchy pass protection along their interior could bump Ingram up their board due to his consistent work in protecting the pocket.”

The Bucs don’t exactly have patchy pass protection on the interior of their offensive line, but a guy as proficient in protecting the quarterback as Ingram is the type of depth piece a “win-now” squad can use.

The good news is that the Bucs wouldn’t need Ingram to step in right away. But down the line, they may need a replacement at one of the guard positions. Aaron Stinnie is only back with the team on a one-year deal, while new addition Shaq Mason is set to hit free agency in 2024 at the age of 31. So, if the team was to draft a player like Ingram, the hope would be that he pans out and can step in as a backup early in his career before assuming a starting role after he gains some experience and gets more comfortable in the league.

Of course, Ingram can’t be considered a complete prospect. Any draft-eligible player has some developing to do, and there are some inconsistencies in his game that need to be addressed before he can be counted on as an everyday starter. An up-and-down 2021 season makes him a little bit more difficult to evaluate. Zierlein grades him out as a “good backup with the potential to develop into a starter.” Sanchez is a little more sure of Ingram’s immediate prospects, saying “he has all of the athletic traits to become an immediate starter in the NFL.”

With just under one month to go before draft weekend, Ingram projects as a later day two pick who may slide into day three. A quick look at his NFL Mock Draft Database page will reinforce the idea that he’s expected to go somewhere in the third or fourth round, while The Draft Network’s grading system gives him a third-round value. Concerns regarding his run blocking consistency and past legal troubles might give teams some pause, but there’s also a lot to like about his versatility and pass protection. He would do well to have a strong showing at LSU’s Pro Day next week if he wants to cement himself as more of a day two prospect.

OK, it’s your time to make the decision, Bucs Nation. Ingram can be a tricky prospect to evaluate, but given his expected draft position, could he be worth taking? Let us know what you think by voting in our poll and discussing in the comments down below.