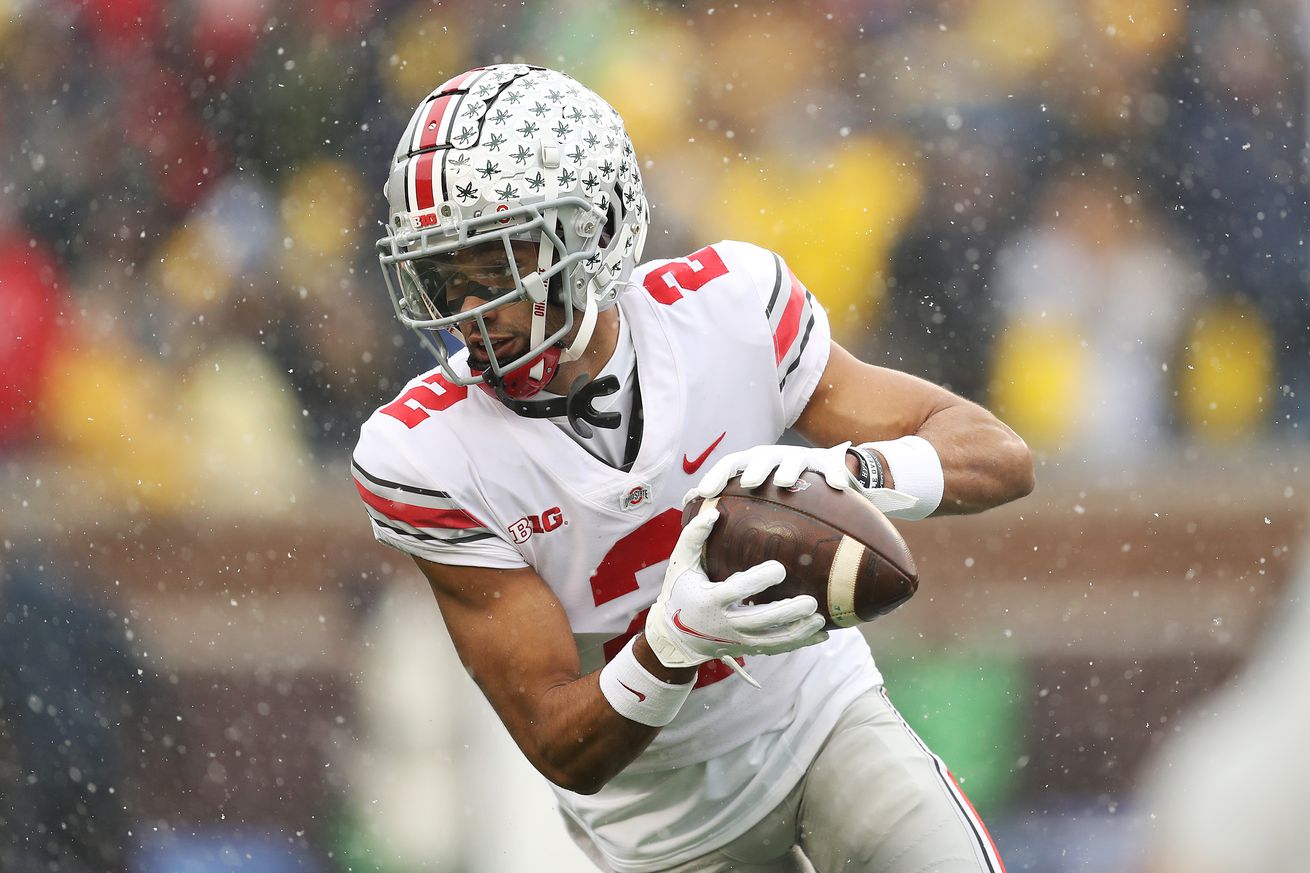 The Bucs began 2021 with what felt like a very deep wide receiver room. Between Mike Evans, Chris Godwin, Antonio Brown, Tyler Johnson and Scotty Miller—and with rookie Jaelon Darden added to the mix—it really seemed to be one of the team’s stronger position groups.

Fast forward to Tampa Bay’s loss to the Los Angeles Rams in the NFC Divisional Round, and you get a very different picture. Evans was still leading the way, posting eight catches for 119 yards and a crucial touchdown. But behind him? The group looked very different.

Godwin tore his ACL in December and missed the rest of the season. Brown skipped away from the team in the middle of its win over the Jets in Week 17, peace signs and all. Johnson, who came through in the clutch a couple of times during the Bucs’ 2020 playoff run, didn’t take the step forward that everyone expected and was largely unreliable. Miller rarely saw the field on offense—and the same can be said about Darden.

Even the emergency plans fell through for the Bucs. Breshad Perriman, who was added to the roster during the season, was sidelined for that loss to the Rams. And after emerging as a late-season star, Cyril Grayson Jr. had to sit out with an injury too.

The Bucs have prioritized the receiver position this offseason as a result, especially after Tom Brady chose to come back for his 23rd NFL season. The team got a three-year deal done with Godwin, plus it brought back Perriman and signed former Atlanta Falcon Russell Gage.

Even with what seems like a full receiver room, the Bucs may look for another pass-catcher in the NFL Draft, both for immediate contributions and with an eye toward the future. That’s why we’re focusing today’s draft profile on one of the most elite receivers in this year’s class: Ohio State’s Chris Olave.

After an impressive prep career in California that saw him play football and basketball in addition to running track, Olave was a composite three-star recruit (per 247 Sports) who chose to sign with Ohio State over a host of others, including UCLA, USC, Tennessee, Nebraska and Michigan. He played a small role during the early portion of his 2018 freshman season before totaling 10 catches for 178 yards and three touchdowns over his final five games. He was then a Third-Team All-Big Ten selection in 2019 after leading the Buckeyes in receiving yards (849), touchdown receptions (12) and yards per catch (17.3). However, he was really only getting started.

In a shortened 2020 season, Olave caught 50 passes for 729 yards and seven touchdowns as Ohio State made it all the way to the College Football Playoff National Championship Game before losing to Alabama. And in his final act as a Buckeye, he hauled in 65 passes for 936 yards and 13 touchdowns—all career highs. He was a First-Team All-Big Ten selection for the second consecutive year, as well as a First-Team All-American. He opted out of Ohio State’s Rose Bowl matchup against Utah, bringing an end to a phenomenal collegiate career that included 176 receptions for 2,711 yards and 35 touchdowns, with the Buckeyes winning the Big Ten Championship three times in his four seasons.

Olave was invited to the 2022 Senior Bowl, but he decided to decline the offer and instead put himself on display at the NFL Scouting Combine and his Pro Day.

Olave grabbed some headlines at the NFL Scouting Combine when he was clocked at an unofficial 4.26 seconds in the 40-yard dash, though his official time was later confirmed to be 4.39 seconds. Even still, it was impressive to watch him display his speed with what was the eighth-fastest mark among receivers.

Ohio State WR Chris Olave ran a 4.26u in the 40-yard dash at the NFL Combine‼️

Olave’s frame, length and play strength might be a concern for some, and none of his measurements at the Combine necessarily did anything to change that. His 32-inch vertical put him in the 12th percentile of receivers, while his wingspan of 73 1/8 inches ranks him in the 14th percentile.

He measures in at about 6-foot-1, 188 pounds and is certainly the type of receiver who will run by defenders rather than overpower them. While there may be room for him to add some weight and strength to his frame, it’s possible he doesn’t even need to. His route running and overall big-play ability was a problem for defenses at the college level, and his profile as a vertical threat should play well in the professional ranks.

Top prospects tend to meet with a long list of teams at the Combine, but it’s still worth noting that Olave met with the Bucs in Indianapolis. He also said at his Pro Day in March that he had a visit scheduled with Tampa Bay.

Olave didn’t redo any of the on-field drills that he completed at the Combine during his Pro Day, but he did catch passes from current Ohio State quarterback C.J. Stroud, putting his speed, hands and route running prowess on display.

The end of the 2021 season proved to the Bucs that you can never have too much depth at the wide receiver position. Olave would give them that in 2022, figuring in with Mike Evans, Chris Godwin, Russell Gage, Tyler Johnson, Breshad Perriman and the rest of the group. But for a player with his quickness, hands and ball skills, he would surely give the 2022 Bucs more than just depth. As a day one draft pick, he’d be expected to step in and produce right away.

Olave’s early-season role this fall would depend on Godwin’s progress as he works his way back from ACL surgery. If Godwin has to miss any of the regular season, the rookie would surely work his way in as the team’s No. 3 wide receiver. Although he can play both in the slot and on the outside, his play strength may not allow for him to match up so well on the outside against physical corners. The good news is, Gage can move around and play anywhere. He essentially split his 2021 snaps with the Falcons 50-50 between the two spots, playing 202 snaps inside and 203 outside. So, if the Bucs need to send Evans and Gage out wide with Olave in the slot until Godwin returns, that would still be a pretty daunting trio for opposing defenses to handle.

Upon Godwin’s return, Olave would slide down to the team’s WR4 positon, serving as yet another dangerous deep threat for Byron Leftwich’s vertical offense. He would be forced to compete with the likes of Johnson, Perriman, Scotty Miller and Cyril Grayson Jr. for that No. 4 spot, but with his skill set and the draft capital that the team would have spent on him, he’d be given every opportunity to see the field plenty in year one.

Olave’s immediate impact as a 2022 first-round pick would likely be significant, but this selection would be one that could prove wiser and wiser as time goes on. By selecting him in the first round—which is where he’s projected to go—the Bucs would have that all-important fifth-year option for the former Ohio State Buckeye. That would mean his rookie contract—assuming the team picks up that fifth year—would expire after the 2026 season.

Taking all of that into account, Olave’s three-year outlook with the Bucs would likely see him become one of the team’s premier pass-catchers. Evans is likely to stick around long-term, but can anyone guarantee that any of the others will sign another contract with Tampa Bay? If they don’t and the Bucs are left to rebuild their receiving corps in 2025, they’d have a solid foundation to build around. There would be the big, physical presence of Evans on the outside and a fast, field-stretching playmaker on the inside in the form of Olave. We’re getting way ahead of things here, but based on the projections and abilities of the latter, that doesn’t feel like it would be a terrible spot to be in.

Now, between 2022 and then, Olave would seemingly have the potential to eventually establish himself as the Bucs’ No. 3 behind Evans and Godwin, with Gage then sliding into more of a jack-of-all-trades role, playing both on the outside and in the slot. And if 2022 is the true final year of Tom Brady in Tampa Bay, what better way to break in a new quarterback in 2023 than with a quartet of Evans, Godwin, Gage and Olave?

If you’ve fallen in love with the idea of Olave suiting up in red, white and pewter over the course of this profile, it’s time for a reality check: The likelihood of him being available when the Bucs are on the clock at selection No. 27 are extremely slim.

He’s been given a first-round grade by just about everyone, with The Draft Network’s analysts giving him a consensus grade of 85.25 out of 100 and The Athletic’s Dane Brugler ranking him as the No. 4 receiver in the draft with a projection to go to the Chargers at pick No. 17. NFL Mock Draft Database has him being selected in the first round in 91.6% of mocks, with the consensus that he’ll be taken at pick No. 16 by one of the last teams Tampa Bay would want to see him play for: the New Orleans Saints.

If Tampa Bay wants Olave badly enough, it’ll likely have to move up to take him. Other than that, it’s down to simply hoping that he falls to them.

OK, Bucs Nation, this one is pretty straightforward. But it’s time for you to make a decision on Chris Olave. Vote in our poll and let us know what you think of him as a potential Tampa Bay draft target in the comments down below.