Davy Jones’ Locker: Buccaneers vs. Falcons Q&A with The Falcoholic for Week 5 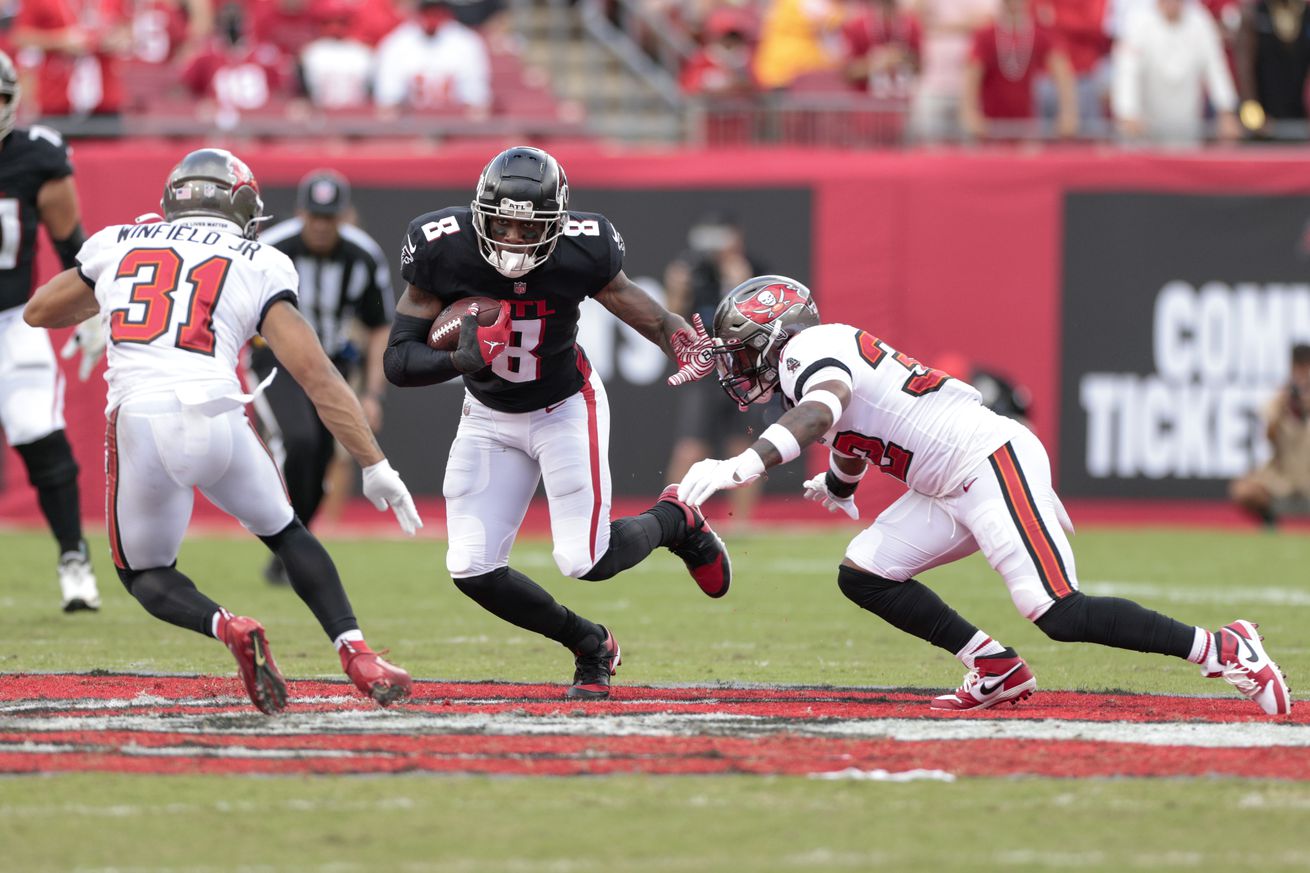 The Tampa Bay Bucs play host to the Atlanta Falcons Sunday for the third straight home game at Raymond James Stadium. Tampa Bay is entering this game at 2-2 following a big loss to the Kansas City Chiefs last week.

We fired off some questions regarding the state of Atlanta’s team for The Flacoholic’s Kevin Knight to see if they can shed some light on what’s going on with the Falcons heading into Week 5.

Big news out of Atlanta with Cordarelle Patterson being placed on IR. How does this loss impact the Falcons running game?

I think the loss of Patterson takes an emotional leader off the field and eliminates some of the dynamic ability from Atlanta’s ground game. It’s a big loss, no way around it. However, we saw that the other RBs on the roster are more than capable of carrying the load as long as the blocking in front of them holds up. Rookie Tyler Allgeier and former UDFA Caleb Huntley dominated the Browns on the ground after Patterson’s departure, and the Falcons have also gotten some big carries out of Avery Williams as a speedster. Losing Patterson takes some of the “juice” out of the rushing attack, but this is still a very dangerous ground game that can grind opponents to dust if given the opportunity.

Marcus Mariota can give the Bucs headaches with his scrambling ability. But overall, what has he brought to Atlanta’s offense that doesn’t show on the stat sheet and that may force Tampa Bay to make adjustments?

Marcus Mariota has been a very inconsistent passer thus far, but his ability to evade pressure and make plays on the move has made him a better fit for Arthur Smith’s offense than Matt Ryan was. After a very productive Week 1 outing as a runner, Mariota’s rushing attempts have been limited. I’d expect that to change this week, especially with the loss of Cordarrelle Patterson and the potential loss of Kyle Pitts. Despite his inconsistencies, he’s capable of some very impressive splash plays. The Falcons haven’t quite unlocked the deep passing part of their offense, but they were fingertips (and, perhaps, some uncalled DPIs) away from multiple deep TDs in Week 4. I’d expect Mariota to try to air out the ball a bit more, particularly if the Bucs put points on the board early.

The Falcons are on a two game winning streak heading into this week. They lost in Weeks 1 and 2 but played close games. What has allowed them to come away with wins the last two weeks as those games were also one score games?

The Falcons should really be 3-1, as they dominated the Saints for three quarters and were the victims of a really impressive and improbable fourth quarter from the Saints offense. But such is life for Atlanta’s fans. Against the Rams, the opposite happened. The Falcons were outclassed early, but tightened up on defense and mounted a heroic rally late with the help of a special teams TD. In the last two weeks, Atlanta has simply started to perfect the game they want to play: dominant rushing, with an efficient play-action passing game behind it. On defense, the plan is simple: limit the opponent’s possessions and create as many takeaways as possible. It worked against two lesser opponents in Weeks 3 and 4, but I’m not sure it’ll work against the Bucs.

Tampa Bay’s struggles are still very visible along the offensive line due to injuries. How will the Falcons plan to attack Tom Brady and the offense to give the Bucs trouble?

Despite Brady’s talent for picking apart the blitz, I’d expect Dean Pees to unleash it early and often to try and rattle him. Will it work? It’s hard to say. The Falcons have been a much better pass-rushing defense than in 2021, but that’s not saying much considering they were by far the worst in the league. At this stage, the pressure is quite inconsistent, particularly when rushing just 4 or 5. It doesn’t help that Atlanta’s secondary—which should be the strength of the defense—has been awful in zone coverage this year. They’ve been better in man, but I’m not sure they’ll be able to get away with that against the possibly fully-healthy receiver trio of the Bucs. A potential wild card could be the return of slot starter Isaiah Oliver, who was just designated to return off short-term IR. He was terrific when healthy in 2021 and has resumed practicing.

The Bucs are currently favored by 10 points. How do you see this game playing out?

I would pick the Bucs to win, but considering Atlanta’s penchant for close games, I’d expect it to be within a score when the dust settles. The Falcons have made a habit of keeping games close, even against teams like the Rams, and I’d expect it to be the same against Tampa Bay. Without Patterson and possibly without Kyle Pitts, that might be a lot harder to accomplish. Still, Atlanta’s ground game should at least limit the Bucs total possessions and keep this one from getting too out-of-hand.

According to DraftKings Sportsbook, the over/under is currently set to 46 for this matchup.