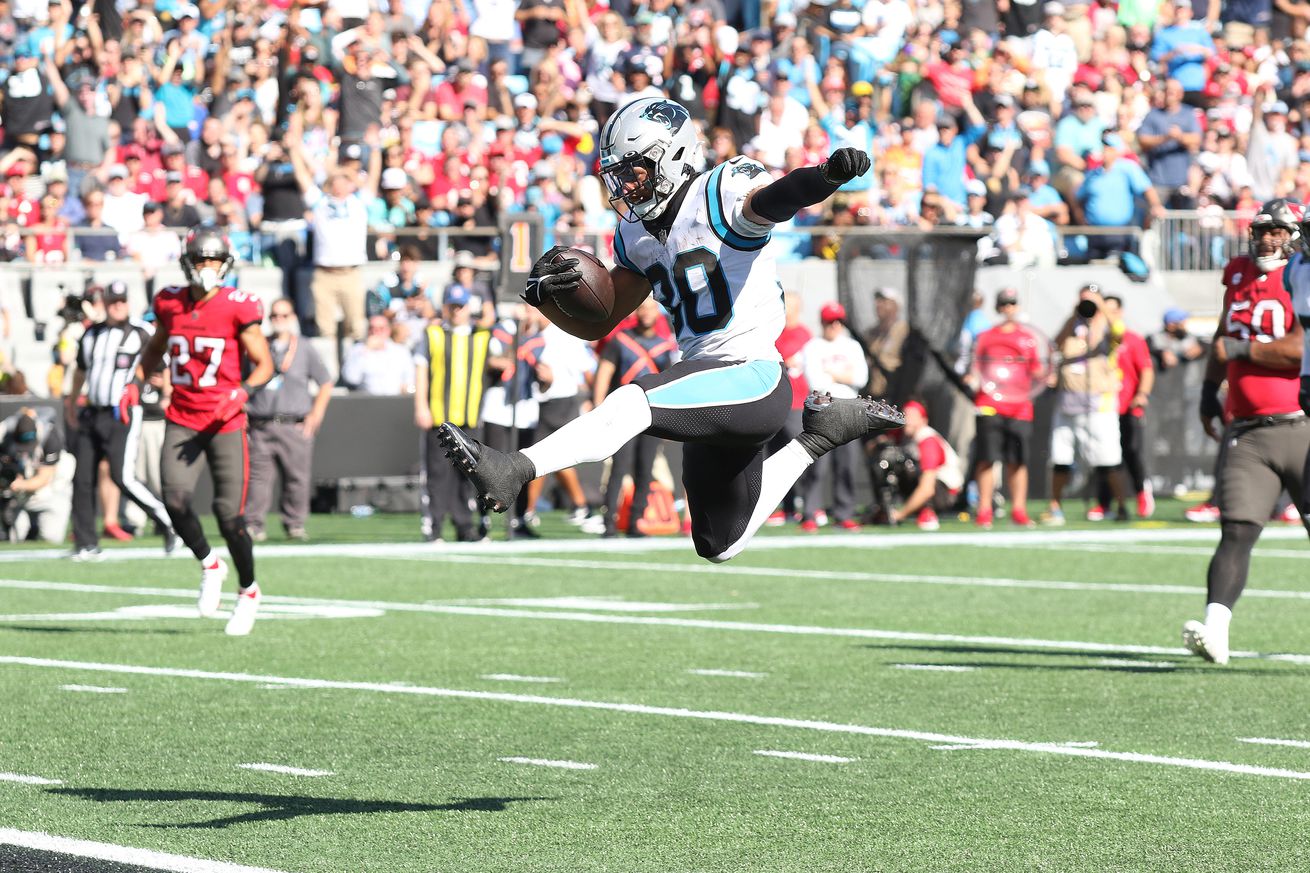 We dive into the state of the Panthers for this week’s game.

The Tampa Bay Bucs are home this week as they play the Panthers on Sunday. The Bucs improved to 7-8 following their Week 16 win over the Cardinals in Phoenix.

We fired off some questions regarding the state of Carolina’s team for Walker Clement from Cat Scratch Reader to see if he can shed some light on what’s going on with the Panthers heading into Week 17.

1. Carolina comes into this game winners of three of their last four games. In those wins they have scored 20 or more points which is a point total the Bucs have struggled to reach this season. What has been the reason for the Panthers “success” as of late in wins against the Seahawks, Lions, and Broncos?

Have you heard of running the football? It’s this cool new strategy that is going to take the league by storm next year. The Panthers are pioneers of this never-before-seen style of football in which they traded away their best running back (Christian McCaffrey) and then put pressure on the gaping wound he left in the roster. They wanted to see what this team’s guts really were, and they squeezed out a physical, no nonsense rushing attack that minimizes their risk exposure through the passing game.

Sam “The Beard’’ Darnold may be the de facto leader of this offense, but the heart and soul of it lies in the offensive line and running back rooms. Bradley Bozeman at center has keyed a renewed attitude of mauling opponents while guys like D’Onta Foreman, Chuba Hubbard, and Raheem Blackshear take the holes the offensive line makes and turn them into demoralizingly consistent yards. No, we aren’t going to talk about the Pittsburgh game until somebody else does it to them again.

2. If you look at several odds around the interwebs, none of them has Steve Wilks as a top choice for him to remain as head coach. Yet, players are lobbying for him. What is the feel out of Carolina on the team’s next head coach and who could they be targeting?

Fans and players alike are mostly on the Wilks train. He is a Charlotte-raised guy who currently not only has his dream job, but is excelling in it. I’m all aboard.

That doesn’t go for every Panthers fan out there. Plenty are upset about ruined draft stock or that he isn’t an offensive wunderkind. These people, in my most flattering opinion, are probably also the type to complain about rainbows ruining their view of the sky. The bottom line is that the Panthers are winning in a lost season. They are playing meaningful games in December and January for the first time since 2017. They are playing for the division title for the first time since 2015. They are threatening to go to the playoffs with a losing record for the first time since 2014. That’s not history we take lightly over here. Wilks is the man who has led this team to the cusp of (recent) history and I think he deserves a chance to show what he can do with his own staff and maybe even a quarterback that he trusts.

Oh, and the joyous part of this all? None of that would be happening if the Tampa Bay Bucs had just won one more measly game earlier in the season and held more firmly on to their lead in the NFC South like every analyst and their mother thought they would. Basically, in a far off—and still highly unlikely—future where Steve Wilks is being measured for a gold jacket, the first entity that he should thank is y’all.

3. Between D’Onta Foreman and Chuba Hubbard, the Panthers have a very good one-two punch out of the backfield. This week they will play against an inconsistent Bucs run defense. How are those two being utilized that will cause Tampa Bay to once again struggle against the run?

Quite similarly, honestly. The Panthers offense is incredibly simple right now, with most of their focus on execution rather than a mystifying variety of plays. They are good at what they do and are taking the honest approach of daring their opponent to stop them instead of beating themselves through mental mistakes. It might sound overly simplistic, but it puts them miles ahead of where they were under Matt Rhule, philosophically.

The biggest variation in the running game comes in how these guys hit the holes more so than how the offensive line creates the holes in the first place. Almost half of Foreman’s yards come after contact. He puts his shoulder into any unblocked defender and often plows through at least the first one. Hubbard, meanwhile, has only about a third of his yards after contact. He’s the shiftier back who looks to dodge contact and is a bigger threat to take a cutback lane as opposed to going straight into a melee. That is also true of third string running back Raheem Blackshear. He’s also a returner and is used to dodging his way through traffic in search of greener pastures.

4. Quarterback Sam Darnold has been a part of the team’s recent success in terms of not throwing the game away. Even if he ends the season on a high note and helps them get into the playoffs, will the team still have other plans to pursue another quarterback for the future this upcoming offseason? Has he or will he do enough to prove to Carolina they can win with him?

Darnold has played mistake-free football through four games. That should not be mistaken for inspiring football. He hasn’t been asked to do much and he has delivered exactly that. If he lights it up into or, God forbid, through the playoffs then the team will obviously have to reassess. But I don’t think any new head coach, Wilks or otherwise, will want to hitch their wagon to Darnold next season without at least having explored every other option out there. Hell, expect Vinny Testaverde to get another call before they commit to Sam again.

5. The Bucs are currently favored by 3.5 points via DraftKings Sportsbook. How do you see this game playing out?

Painfully, for one of these teams. Either the Panthers maintain their success on the ground and bruise the Bucs en route to a lead change in the NFC South or the Bucs clamp down on the Panthers and force them to rely on Sam Darnold. No matter what happens, I expect this game to be chippy, awkward, and chaotic. No one will walk away feeling good about themselves and no one will have a clear expectation for what just happened.

If this is going to be a de facto NFC South title game then it is damn well going to reflect the maelstrom of chaos that has defined this season more than most.

When forced to pick, I pick the Panthers. They feel the most dangerous between these two teams and I have no idea what to make of Tom Brady’s recent struggles (outside of the two minute drill). But that is also the kind of game that these Panthers have always lost: the game they should win, the game that outside observers are even picking them to win. Betting lines might be holding the Bucs as favorites, but a lot of media are falling in love with the Panthers as a dark horse and that never bodes well for them.

I wouldn’t bet on this game if I liked money. I think the safest bet would be on whichever team establishes a two score lead in the fourth quarter. I know, it’s a bold prediction. But anything tighter and the “anything could happen” ethos of this division negates any other kind of confidence.

According to DraftKings Sportsbook, the over/under is currently set to 40 for this matchup.