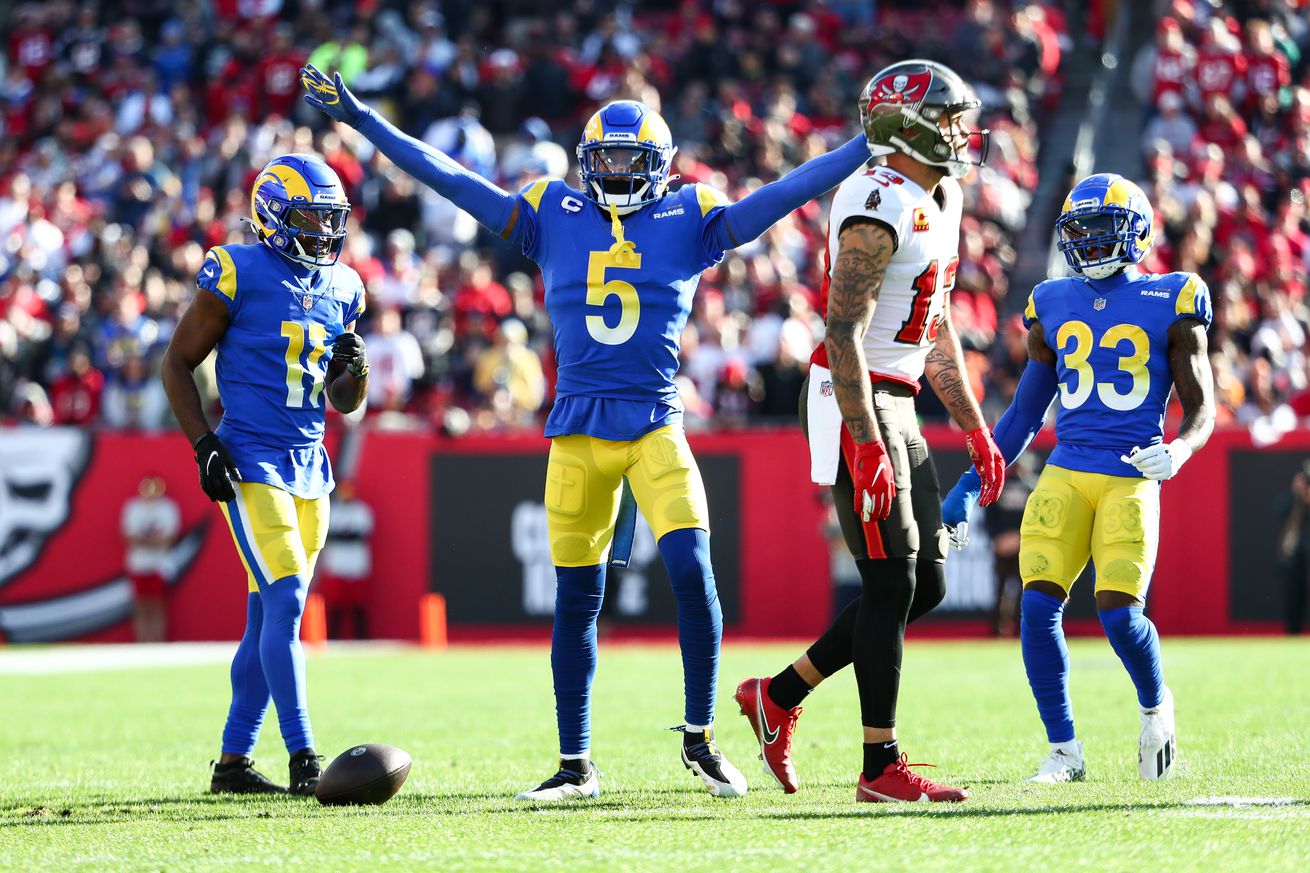 We dive into the state of the Rams for this week’s game.

The Tampa Bay Bucs are home this week as they play host to the defending Super Bowl Champions Los Angeles Rams on Sunday. The Bucs dropped to 3-5 following last Thursday’s loss to the Ravens as the Rams are also hoping to continue to improve on their 3-4 record.

We fired off some questions regarding the state of L.A.’s team for Evan Craig from Turf Show Times to see if he can shed some light on what’s up on with the Rams heading into Week 9.

1. The Rams were easily one of the best football teams in all facets of the game last season, while of course finishing as champions. But through eight weeks of this season the team doesn’t look the same as they did in 2021. What is the reason for the offense not being as productive as last season? Is it really due to a struggling offensive line because of injuries like the excuse being applied in Tampa Bay? Tom Brady still hasn’t been sacked near as often as Matthew Stafford, though.

Offensive line is only just the tip of the iceberg in Los Angeles. They also don’t have a running game whatsoever so the play calling throughout the games have been spotty at best since they can’t get into a rhythm. This clear lack of complementary football has cost this team wins and has put far too much pressure on Stafford’s right arm. This LA squad is not built to overcome these issues which is why I believe they’ll be in serious trouble should they turn their act around and somehow get into the playoffs. I was a little surprised the Rams didn’t make any moves at the deadline. They tried their hardest but had a couple brutal strikeouts on Brian Burns and Christian McCaffrey. Even a smaller move they should’ve made didn’t materialize. I’m unsure whether this team has a playoff run in them. This LA group reminds me of their Super Bowl team back in 2019 because their issues are eerily similar. Still, no matter what move they might’ve made in the deadline wouldn’t have mattered. The Rams are in a slump and might not come out of it until it’s too late, and their offensively offensive issues are the biggest culprit.

2. Los Angeles had some turnover on the roster. Defensively, they are tops in the league still in yards given up both against the pass and the run. What has kept the Rams defense playing at a high level and performing well?

They might be near the top in a lot of categories but they haven’t been as dominant as people have made them out to be. No, I’m not still bitter over the 49ers annual beatdown(s) but that game was a clear example of the problems they have. (Okay, perhaps I’m still a bit bitter.) They played well for the first half on Sunday, limiting the Niners to just 10 points. Then, an avalanche came tumbling down on the Rams that they couldn’t recover from. Defensive Coordinator Raheem Morris has struggled to counter the opposing offense when they begin to get into a groove. This has been part of the reason that game along with the Bills opener had turned a close game into a blowout. Even in the Falcons game week two, Atlanta was hitting their stride offensively, nearing completing an improbable comeback before Ramsey put an end to it. To answer your question which I haven’t done so my apologies, the reason the defense has played well as of late is due to playing weaker offenses that couldn’t capitalize on their flaws. The Cardinals, Cowboys (playing a backup) and Panthers couldn’t do what the Bills and 49ers (twice) have done this season and that is bullying them into submission. That is why I’m cautious in crediting this defense. Their stars have generally played well but their unit as a whole leaves a lot to be desired.

3. Tampa Bay’s offense is in shambles. In fact, no one should expect much out of them again this week. But with that said, is there anything the Bucs can do to have some kind of success offensively against L.A.’s defense?

LA does not have an edge rusher to compliment Aaron Donald and it shows. If the Bucs can figure out a way to neutralize AD and get the ball out quickly, they have a shot. Of course that’s easier said than done but what have they got to lose at this point? The Rams’ just haven’t generated the pressure as they did so often last season. During their Super Bowl run, Von Miller was the perfect option to have alongside Donald. Opposing offenses were so fixated on stopping those two that something like Leonard Floyd was left single blocked. Floyd has been a disappointment. Besides him and obviously Donald, the Rams just don’t have a guy to step up in their place so perhaps the Bucs have some kind of shot there, O-line issues be damned.

LA also doesn’t have quality depth in the secondary, at safety in particular. Tampa’s offense should attack safety Taylor Rapp in particular. He frequently misses tackles, constantly takes poor angles and doesn’t have the speed or strength to become a mainstay at the position. He likely hit his ceiling last season and now he’s being exposed for all the league to see. The Rams play a lot of soft coverage which should be a welcome sight for Brady. If he can find a way and get going, poor Rapp and a largely inexperienced secondary will be shredded.

4. Same question, but defensively. The Bucs will not be 100-percent healthy on the defensive side of the ball so what will they have to do to keep Matthew Stafford and the Rams offense off balance and continue being one of the top defenses with the lowest amount of points given up?

Pressure Stafford and keep the run game in check. Limiting the run game should be no big deal as the Rams don’t have one. Last season, Stafford was one of the best quarterbacks under pressure. This season, he’s had his issues primarily in the last two quarters of a game. He has also been sacked a bunch too which doesn’t help his production. Cooper Kupp will likely play Sunday but could be hindered slightly due to injury. The best way to limit their passing attack is to force Stafford to throw to literally anyone else. Much like containing AD, this is easier said than done. LA’s receivers have been largely inconsistent. Allen Robinson has been better the last couple weeks but shouldn’t be trusted completely just yet. Then there’s Tyler Higbee who might be questionable due to a neck injury. No defense can take Kupp out of a game completely. He will get his targets and catches. If the Bucs want to have a solid defensive outing, limit the bleeding the best they can.

5. The Bucs are favored by 3-points via Draftkings Sportsbook. In my opinion, they have no business being favored but that’s neither here nor there. How do you see this game playing out?

This is such a strange game to predict as neither one of these teams can afford to lose and that’s why I can see it bringing out the best in each other. I’m envisioning a defensive matchup more than anything. Both the Rams and Bucs have trouble sustaining drives on offense so this one will be a matter of whose defense will be the last one standing. On one hand, I don’t see the Bucs losing their fourth in a row. Maybe that’s just the Tom Brady effect you were mentioning to me. On the other hand, if LA can do what they did to the 49ers in the first half, and actually do it for the whole game, they’ll win this one handily but I’m still skeptical. At the beginning of the year, I figured these two would be the class of the NFC and that just hasn’t been the case. I also said the Rams would lose this one but I’ve changed my mind. Give me LA in a low-scoring affair.

According to DraftKings Sportsbook, the over/under is currently set to 42.5 for this matchup.