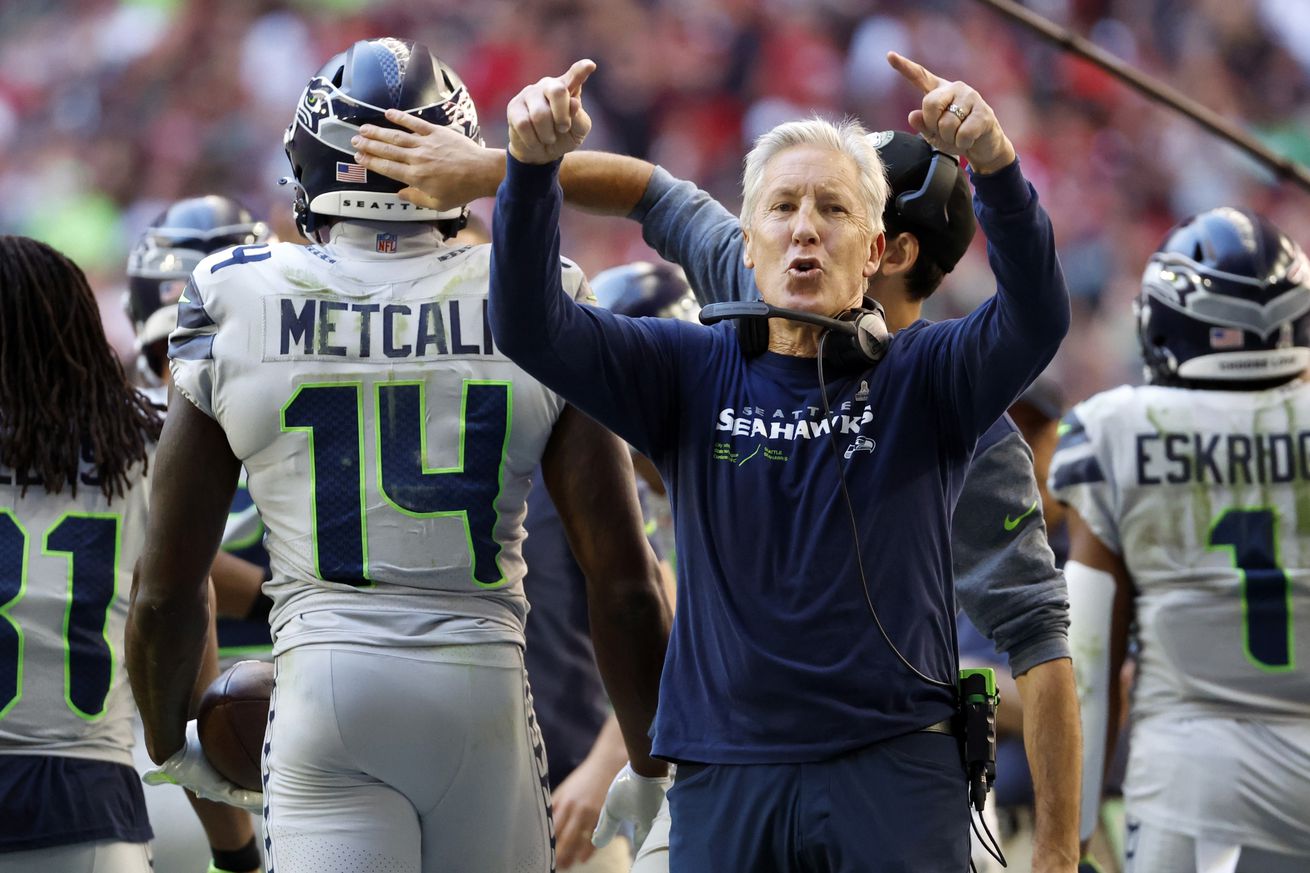 We dive into the state of the Seahawks for this week’s game.

The Tampa Bay Bucs are in Munich, Germany this week as they play “host” to the Seattle Seahawks on Sunday. The Bucs improved to 4-5 following their Week 9 win over the Rams while the Seahawks are sitting on top of the NFC West at 6-3.

We fired off some questions regarding the state of Seattle’s team for John Gilbert from Field Gulls to see if he can shed some light on what’s up on with the Seahawks heading into Week 10.

1. Many didn’t put much into the Seahawks this season after the offseason trade of Russell Wilson but they are playing good football. What has been the difference in being so successful?

I was one of those who didn’t have high expectations for the Hawks at all this season after the offseason changes, but several factors have combined to yield an on field product that far exceeds expectations. The first has been Geno Smith playing at such a high level and performing as one of the best pocket passers in the league. It’s obviously a quarterback driven league, and there wasn’t a whole lot to go off of in terms of recent evidence of what Smith could do on the field, so his performance has easily exceeded even my loftiest expectations. Turns out that he put the five years of sitting and learning behind Eli Manning, Philip Rivers and Russell Wilson to use, and his knowledge and command of the offense are what have been the most impressive through the first nine weeks of the season.

Smith performing so well has lightened the load on an offensive line that is extremely young and inexperienced by the standards of the NFL, and the defense came together to perform at a high level far faster than I ever anticipated. The current starting cornerbacks, Tariq Woolen, Mike Jackson and Coby Bryant at the nickel spot entered this season with just 29 snaps of combined experience at corner, and they have far, far exceeded expectations, which has greatly helped the defensive front.

That all said, Seattle has been fortunate enough to face the third easiest schedule through the first nine weeks as measured by strength of schedule, so it may not be all smooth sailing from here through the end of the year. However, with how weak the NFC is this season, missing the playoffs after such a hot start would be a significant disappointment at this point.

2. Quarterback Geno Smith is having a great year especially with that 100-plus passer rating. How has Pete Carroll been able to get Smith to play at such a high level?

I don’t know if it’s Carroll or offensive coordinator Shane Waldron or Smith finally getting an opportunity to shine after spending the better part of a decade sitting and learning the game, but Smith is simply playing quarterback at a high level. He’s making the proper reads, he’s getting the ball out on time and he’s not making risky decisions trying to do it all himself. He certainly appears to understand that he’s got a solid cast of weapons around him, and he’s making use of those weapons to take whatever the defense is giving to him.

3. Tampa Bay’s offense has been shaky all season. What about the Seattle defense should concern the Bucs offense this weekend?

The way the Seattle defense has played over the past month, basically everything. The pass rush is not made up of All Pros by any means, but the secondary has been providing enough time for the likes of Uchenna Nwosu, Quinton Jefferson and Darrell Taylor to get pressure. And one of the big shifts that the defense made about a month ago was to move away from using base personnel and going to a very heavy usage of nickel and dime packages. That, of course, works to take away big plays and force offenses to work their way down the field by consistently executing, and the opponents they have faced have not been able to do that.

Now, they certainly haven’t had to face a quarterback like Tom Brady recently, but so far this season Brady hasn’t been the Brady fans are familiar with. Hopefully Brady doesn’t really hit his groove until he faces the Browns in Week 12.

4. The Bucs are getting healthier on defense, especially in their secondary. Despite the loss of edge rusher Shaq Barrett, the defense should still come out ready against Seattle. How will Seattle’s offense scheme against the Bucs defense?

All season the offense has flowed through the tight ends. When opponents have been able to slow down Will Dissly, Noah Fant and Colby Parkinson, or to take them out of the game completely, the offense has faced difficulties. In contrast, when those three are able to get open and inflict damage, it opens things up for Tyler Lockett and DK Metcalf to do their thing. So, the big question for the Bucs will be how they defend the tight ends, and whether they can take them out of the game without having to sacrifice covering Lockett and Metcalf.

A huge part of what has allowed Geno to be so successful this season has been his ability to make the right reads and know where the open man is going to be. If the Bucs can keep him guessing and flummox him in his reads, that is likely their best chance to slow down the Hawks offense.

5. Via DraftKings, the Bucs are currently favored by three points. How do you see this game playing out?

I have been betting against the Seahawks all season, and they have been making me very happy to prove me wrong. So, if it ain’t broken, don’t fix it, so I’ll take the Bucs in this one, while hoping to be wrong yet again. And the more wrong, the better.

According to DraftKings Sportsbook, the over/under is currently set to 42.5 for this matchup.