Gronkowski: ‘If I do play football again, it’ll be for the Bucs’ 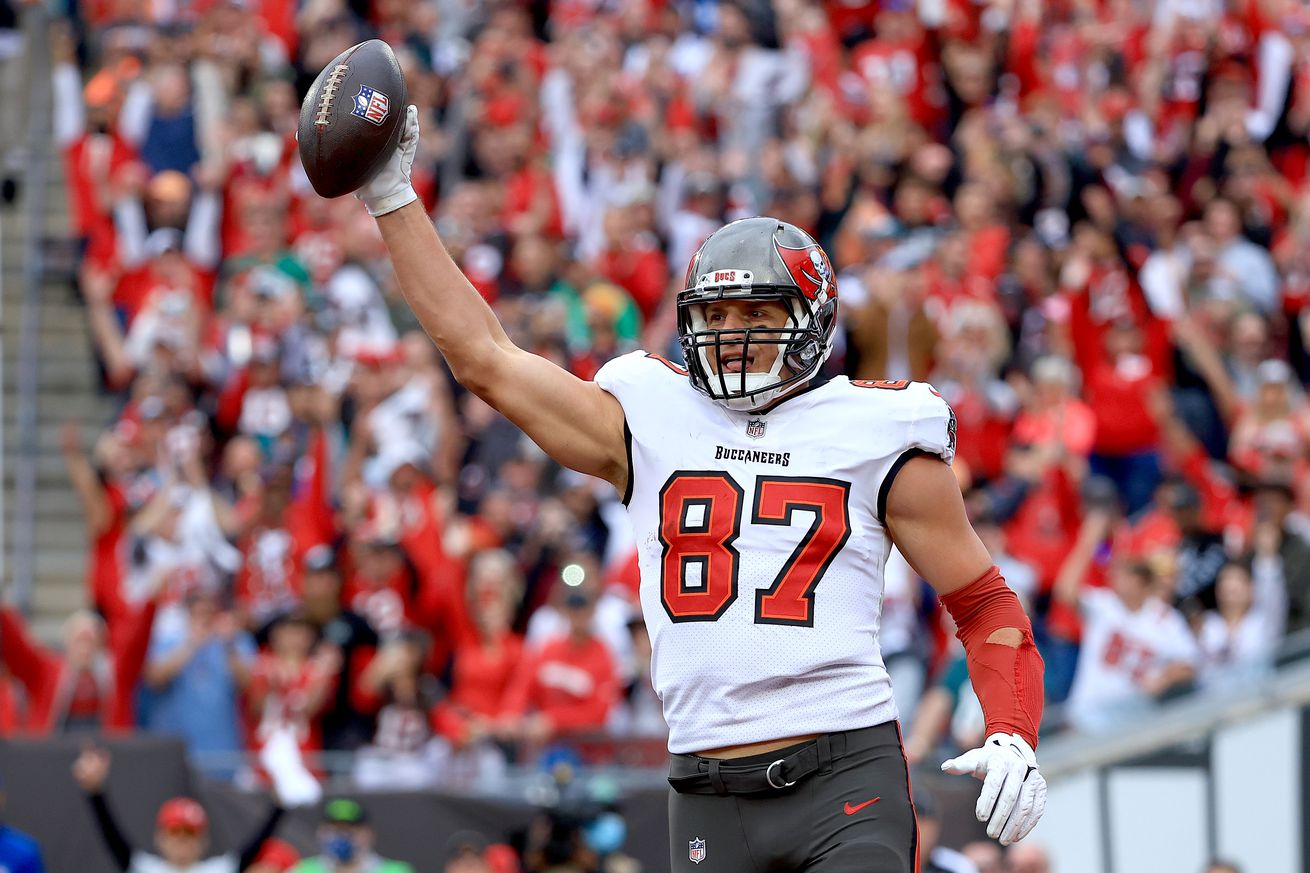 The veteran tight end says the situation in Tampa Bay is just too good.

The Tampa Bay Bucs and Rob Gronkowski appear to be in a stalemate of sorts. The team appears to be waiting on the veteran tight end to decide on whether or not he returns to football while Gronk is just enjoying life outside of the game at the moment.

To see where the 32-year-old is in his decision-making process, SB Nation’s Debbie Emery caught up with the veteran out in California ahead of Saturday’s Nickelodeon Kids’ Choice Awards and asked him questions around not just where he stands personally but where he also stands with the Bucs and football.

Emery: Does this mean you’re going to re-sign on April 30th?

Rob Gronkowski: It depends how tipsy I am, what kind of decisions I am going to make while at Gronk Beach. But no, I am not going to re-sign then, it actually feels good right now, it feels good to be free — not having any football over my head, working out when I want to work out. I love my teammates, I love the Bucs’ organization, everyone from A to Z, they’re all great people and it’s a lot of fun to go to work there. Right now, I am just chilling and doing other things like hosting the Kids’ Choice Awards show and throwing a Gronk Beach party. Not staying too busy, just having a couple of things a month to focus on then, and doing what I want to do in my free time.

Emery: When do you have to decide by?

Gronkowski: I don’t really have a decision date, I don’t ever have to decide – if I don’t decide then that just means I’m not playing! There really is no decision that I have to make in my life, maybe I’ll just go the rest of my life without ever deciding. People will be like ‘Rob, what did you decide?’ when I’m like 70 years old, and I’ll say: ‘It’s still up in the air.’

Emery: Are you in contract negotiations, or are you not even there yet?

Gronkowski: That will start if I decide that I want to play. There’s no reason to do that while there’s a decision to be made first. It’s all about if I decide to.

Emery: Did Bruce Arians standing down as head coach impact your decision at all?

Gronkowski: No, no, no. If I go back to play football, it’s going to be for the Bucs. I loved playing for Coach Arians.

Emery: Would you play for anyone else?

Gronkowski: Not right now, the Bucs situation is just too good if I decide to go back and play. Like I said, I love all my teammates there. They are all great teammates and all selfless players, they are there for the team and what’s best for the team and the whole organization. If I do play football again, it’ll be for the Bucs.

Emery: Are you excited for Todd Bowles to be the new head coach … whether you play or not?

Gronkowski: He’s a great coach, he was a coach for the Jets for a little bit so he was actually one of my rivals (at the time) for a couple of years.

Emery: It’s not really a rival when you beat them all the time.

Gronkowski: That’s true! He’s a great dude, I’ve been with him for the past two years, he draws up great schemes and I think he’s going to do a great job at the Bucs.

Emery: You have to go back, as I never got to see you play in Tampa last year!

Gronkowski: If that’s the reason then I’ll have to come back, I’ll put that one in my back pocket as one of my reasons, so you can interview me after a game. That’s wonderful, not a problem!

Although Gronkowski seems to be set on playing for no team other than the Bucs which would undoubtedly make Tampa Bay fans happy. However, he seems set on staying out of playing the game of football for the time being.

For more on the interview, and to read why Gronk suggests quarterback Tom brady should be slimed among other topics relating to Nickelodeon’s award show this weekend, check out the rest of their chat here.