It’s not just about winning for the Buccaneers; it’s about how you win 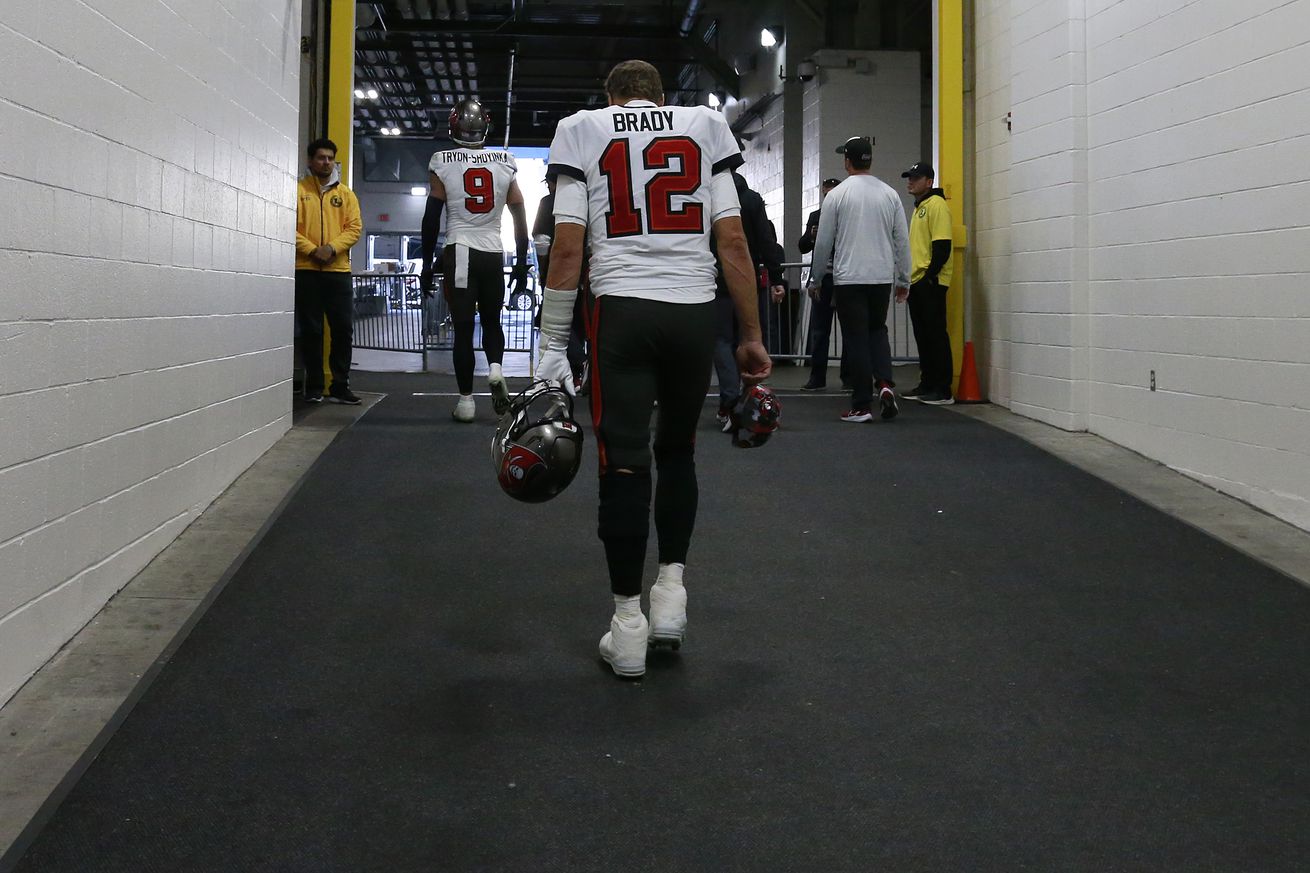 The Tampa Bay Bucs don’t just need to win games; they need to win them in the manner expected of a championship caliber team.

Teams that are in the hunt to become contenders are desperately trying to win every possible game that they can, grasping at the chance to have a window opened for them to peak at a playoff run or a championship.

For teams like the Tampa Bay Bucs, the window has been open, that view has been peeked at and that scene has been seen, as a result the week-to-week dynamic of each game changes. No longer is it about doing all you can to win every time you play with fans just clamoring for a victory Monday — more of an emphasis gets placed on the how. How did the team win? What did the game look like? Was the performance up to snuff; was it what was expected? This is the reality of a championship-contending team.

So far this season, Tampa Bay has won games and lost games, but even in the games they have won they haven’t looked like the team fans were hoping to see when Tom Brady came out of retirement for a third season of Buc-dom. The wins have felt tedious, and the team has had to grind past its opponents en route to victory. Their season has featured losses that felt like stalemates with stagnation from a once-explosive offense and a defeat where the team was left looking like they were not in the same league as their competition.

Playing the Pittsburgh Steelers, without T.J. Watt and Minkah Fitzpatrick, while starting a rookie quarterback for only the second time in his young career the Bucs didn’t have to win, they had to dominate. A Super Bowl-contending team leaves this rendition of the Pittsburgh Steelers for dead, without a pulse. Look no further than one week earlier when the same Pittsburgh Steelers took on a surefire Super Bowl contender in the Buffalo Bills. Josh Allen threw for over 400 yards and four touchdowns. Buffalo’s defense took the ball away from Kenny Pickett and the Bills beat the Steelers by 35 points.

Five-touchdown victories on the road can’t be the expectation coming into any game but you shouldn’t need a two-minute drill from Tom Brady at the end of regulation or a clutch last-second stop to beat a 1-4 Steelers team. The standard is simple, beat the teams you are expected to beat and beat them convincingly.

Tampa Bay has much higher aspirations than the Steelers in 2022. They are supposed to be two organizations currently heading in different directions so they shouldn’t look like they are on an even playing field when they are matched up. Anything less than a two-score victory on Sunday would have felt more like a loss than a win.

The painful thing for Tampa is, to the jaw-dropping shock and stomach-churning dismay of Bucs’ fans, the Bucs actually lost this game. Lost, as in did not score more points than Kenny Pickett (and Mitchell Trubisky). Against backups, Tampa Bay’s offense toiled away ineffectively as they were unable to reach a mere 20 points for the third time this season. Tampa was not entirely healthy themselves but they had enough hands on deck to sail through a mediocre Steelers team. Even if Tampa Bay had gutted out an ugly road win in Pittsburgh on Sunday there would still be questions.

So what is the problem?

The problem is there are problems, plural.

Offensive play calling- It’s not going well. A masters degree in football is not required to understand any team functions best when you allow the best players to make plays.

The best player on Tampa’s roster is a fun debatable topic. We can throw a couple names out there, but surely in any discussion of the like will be the name Mike Evans. Mike Evans is not Jerry Rice or Randy Moss — he’s not even Calvin Johnson in his prime — but he is the best offensive player in team history. He leads the franchise in essentially every career stat he is eligible to lead in. Of course he sees double teams and safeties shaded over the top, he’s Mike Evans, but on Sunday, he played a full game against backups and saw four targets.

The faint of heart still frustrated by Sunday’s loss are warned to look away. Evans’ minuscule targets came with a 100 percent success rate, all resulting in catches; he and Brady were a perfect 4/4. So why not go for 5/5 or 6/6?

Even more difficult to digest is the fact that Leonard Fournette and Rachaad White combined for a total of 35 touches. The two runners are fine backs but neither is in the tier of player Evans is, nor are they the big play threat that Evans has proven to be. This gaping chasm in reps is jarring. Four chances to touch the ball for the franchise’s all-time leader in *fill in the blank with whatever stat you would like* and 35 split between the team’s two running backs is unacceptable.

The inability to get any semblance of a push, up front, in short yardage- The offensive line for the Tampa Bay Bucs has been the Achilles’ heel of their offense in 2022, and short yardage conversion opportunities have been their kryptonite.

Tampa has dealt with injuries and inexperience all season, and it shows at the most inopportune times each week.

Ali Marpet’s retirement was unexpected, and losing a great player like Marpet in the same offseason you lose his counterpart Alex Cappa is not advantageous. After losing the two guards that have protected Tom Brady the most during his Tampa tenure, logic lends itself to thinking that maybe those large losses can be mitigated by surrounding their replacements with great players. Two studs at the tackle spots and a perennial grinder at center, then of course, the Bucs had to watch that grinder in the middle sustain a season-threatening injury. Ryan Jensen went down and then Aaron Stinnie, another guard, followed suit, leaving the Bucs’ offensive line noticeably set back.

Watching the Bucs scratch and claw to get a yard’s worth of push is like taking notes from an encyclopedia with cave paintings. Tampa’s offensive line is on a journey they’d soon like to forget. Presently, the course of this season has set them up to be one of largest scapegoats of Tom Brady’s legendary career. If the current pace keeps up, Luke Goedeke may live rent-free in Tom Brady’s head deep into the quarterback’s retirement where TB12 will still be looking over his shoulder, fearing a collision.

Will the real Bucs defense please stand up- Who are the 2022 Tampa Bay Bucs on defense? Tampa Bay’s defense started the season like a buzz saw. They sliced through competition in Weeks 1, 2, and 3. Week 4 they were humiliated in prime time, but this was a game against a good offense with a fire for revenge burning in their bellies.

Week 5 was cashews, peanuts, and almonds: a little bit of a mixed bag. The Bucs flexed domination and then flipped domination into cracks in the foundation as the Atlanta Falcons began to attempt a late comeback. Still, in four of the first five games of the season Tampa’s defense had held their opposition’s offense under 16 points.

To their credit, the Bucs did sit down at the table, they sampled some appetizers, picked at the main entree, but ultimately they weren’t even hungry enough to make it through to desert.

Tampa Bay was not terrible — they held the Steelers to 20 points — but they did not force any turnovers, and when they needed to get off the field in the fourth quarter to give their team a chance to win the game, they failed.

This game was a massive opportunity for the Bucs to do what Buffalo had done just one week prior: provide an unceremonious “welcome to the NFL” moment for a rookie quarterback. Tampa Bay’s defense doesn’t need to lock down every opponent like the 1985 Chicago Bears or even like the 2002 Tampa Bay Bucs, but they do need to dominate the offenses they are supposed to dominate. Against an opponent like this the result should be an offense abruptly halted, not politely asked to stop.

The reality is harsh. Tampa Bay is one highly questionable penalty away from being dangerously close to 2-4 and not even in first place in their division. This is a team that was thought to be a contender for first place in the conference, a conference which views the NFC South as its weak link. The bigger problem is the Bucs are a team with a lot of talent but no identity. They can’t find a rhythm, and without an identity, how do you game plan? How do you call plays when you don’t know who you are or what you want to do?

There is not one player or person who can absorb all the blame for the Bucs’ early season struggles, if there was then they could be corrected.

The problem has been unfixable because it’s multidimensional. No player has played their best, no position group is maximizing its potential and neither side of the ball can escape blame. Heading into week 7, the Bucs don’t look like the 2022 Super Bowl champions.