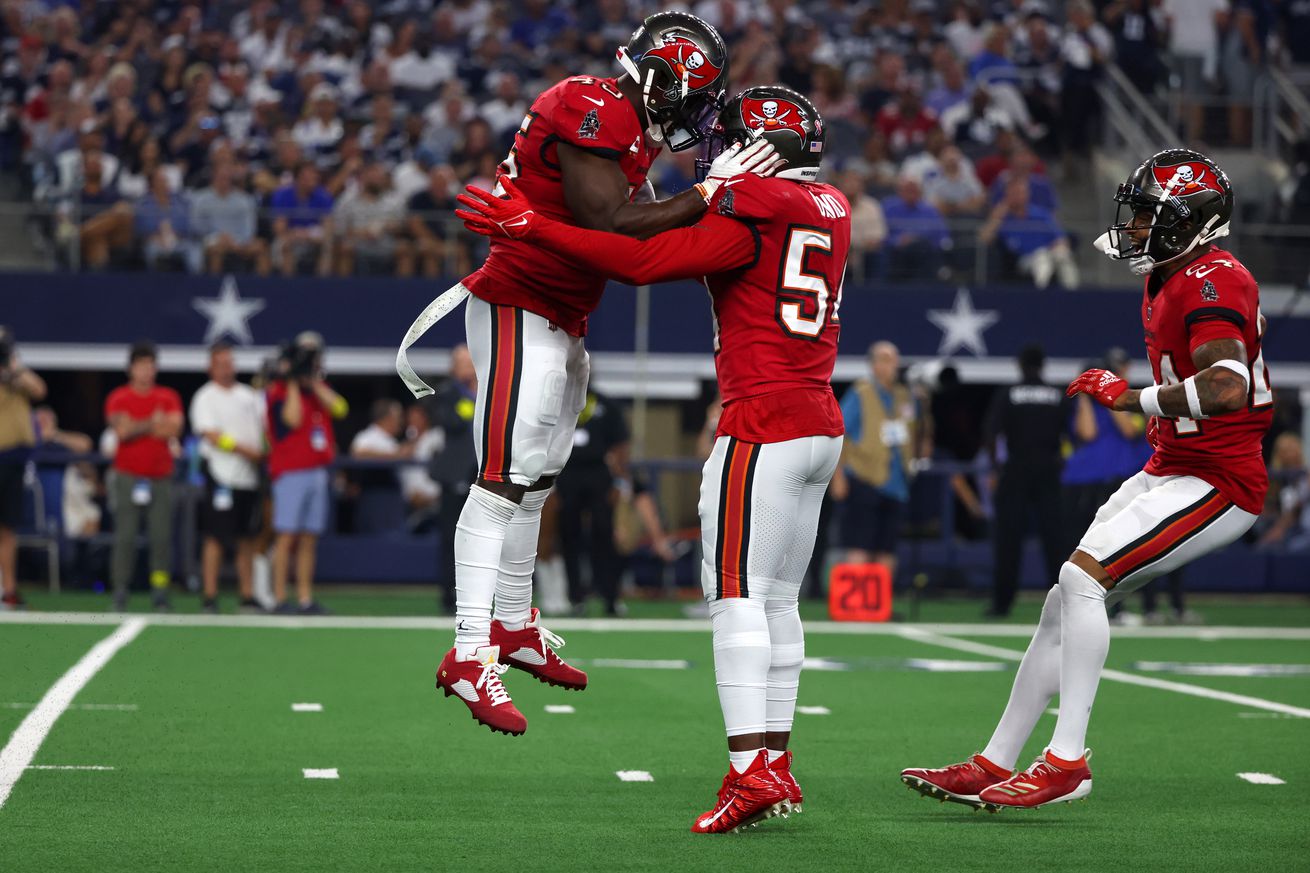 The Tampa Bay Bucs defeated the Dallas Cowboys 19-3 on Sunday night at AT&T Stadium in Arlington, Texas. After giving up an opening drive field goal to the Cowboys, the Buc defense stiffened considerably, not allowing another point the rest of the game. The offense moved the ball consistently from the outset, scoring on 4 of their first 5 drives. Unfortunately, those scores were field goals, not touchdowns, which allowed the game to remain closer than it should have been. All in all, it was a successful beginning to the 2022 NFL season for the Bucs in all three phases of the football game.

Offensively, the Bucs made an early commitment to the running game and stuck with it throughout. Leonard Fournette rushed for 127 yards on 21 carries and looked like the All-Pro talent that he has the potential to be. Tom Brady was efficient and managed the game very well by going 18-27 for 212 yards with a touchdown and interception. The play calling was excellent all night long, especially the jet sweep runs to Julio Jones (17 yards rushing and 69 yards receiving.) The one mistake that was made, was Brady’s interception on 3rd down and short late in the game. It looked like a miscommunication between Brady and Mike Evans (five catches for 71 yards and a TD), but they probably should of ran the ball considering the success they were having. Kudos to the offensive line for a great job of run blocking all night long and giving Brady enough time to complete a couple deep shots down the field to Julio Jones and Mike Evans.

On the defensive side of the ball, the name of the game was lockdown. The secondary never gave an inch to any of the Dallas receivers and made Dak Prescott (14-29 134 yards and an interception) look like a very below average quarterback. The tackling was absolutely fantastic all game long. Defenders used superb technique, and only allowed one play over 20 yards the entire evening. Devin White led the defense with eight tackles, and two sacks. Antoine Winfield Jr. had a very strong game totaling six tackles and one interception. The run defense only gave up 71 yards on 18 carries, but they did not do a great job of contacting the runner behind the line of scrimmage. I’d like to see a few more tackles for loss from the defensive line, as well as getting pressure on the quarterback without having to blitz. The front four played well, but they will need to step up their efforts in order to be championship material.

The special teams were certainly special on Sunday night. Last year the Bucs finished in the bottom part of the league in kick return yardage for, and against. They obviously paid attention to this unit in the offseason, because the tackling on all kick coverage teams was excellent. They allowed the Cowboys 19.3 yards per kickoff return, which is a vast improvement from last year’s mark of 26.8 yards per return. Ryan Succop converted 4-5 field goals, and rookie punter Jake Camarda averaged 50.7 yards per punt. My hope is that the special teams stay consistent all year long and give the Bucs an advantage that they did not possess last year.

On the injury front, Chris Godwin, and Donovan Smith, both suffered injuries that ended their night prematurely. Luckily for both of them, as well as the team, their injuries are not serious. Godwin strained his hamstring and head coach Todd Bowles simply stated they hope to have him back “sooner or later.” This may actually be a blessing in disguise as it gives him more time to recover from his ACL injury. Smith hyperextended his elbow and may not miss any further games as long as he can tolerate the pain. For the Cowboys, Dak Prescott injured his hand, and will be out for 6-8 weeks. That’s definitely not good for Dallas.

A victory in the NFL is always a good thing. A road victory on opening night sets the tone for the season and provides terrific momentum moving forward. I expect the Bucs to continue to be a run first, defensive minded football team as the year progresses. As the offense becomes healthier, they will build continuity, and eventually become explosive. If the defense can play all season like they played against the Cowboys, the Tampa Bay Bucs will be in contention for their third Super Bowl championship.