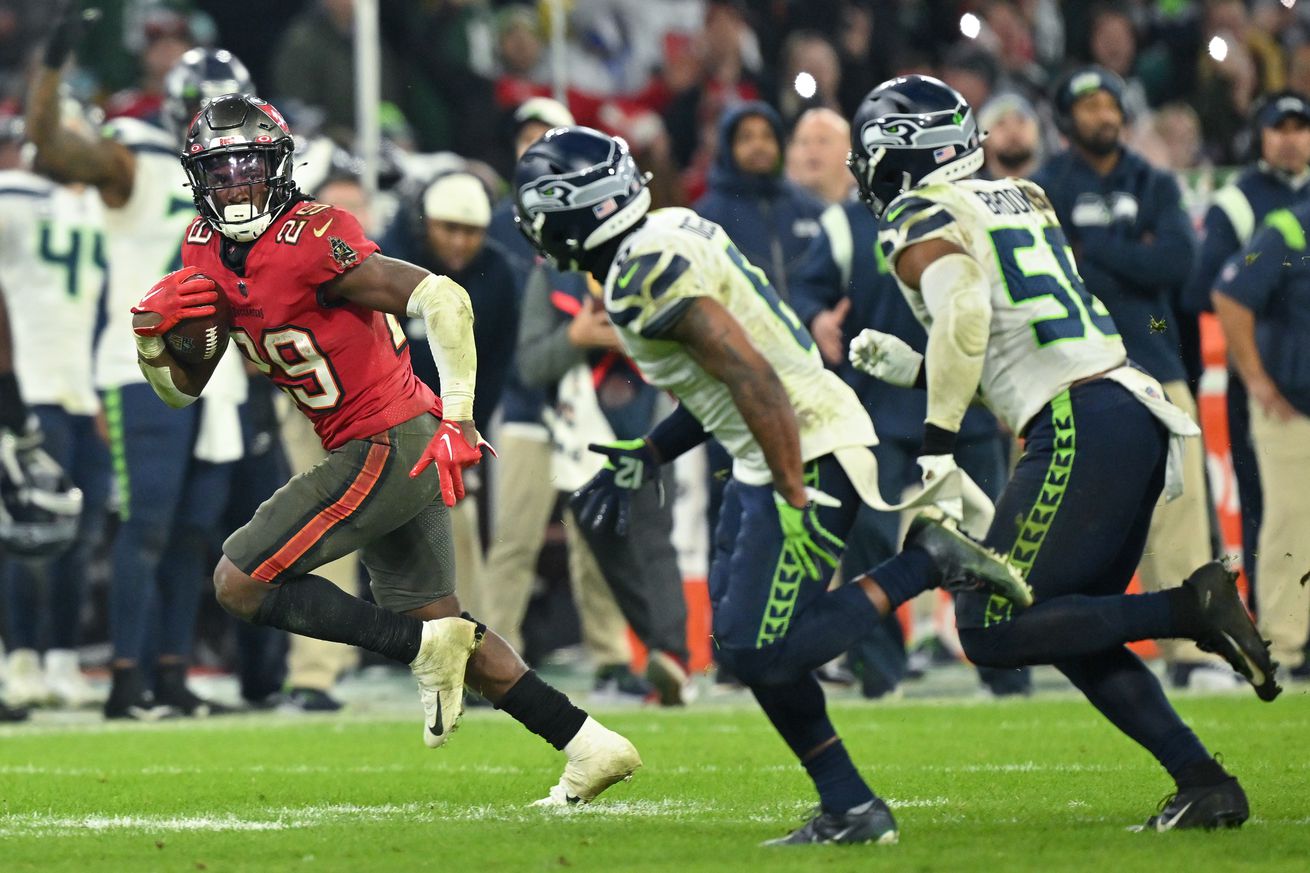 Rookie Rachaad White rushes for 105 yards, and the defense holds Seattle to 39 rushing yards, as Tampa Bay wins in Germany

The inaugural NFL game in Munich, Germany will be one to remember for the Tampa Bay Bucs, and their fans, as the Bucs defeated the Seattle Seahawks 21-16 at Allianz Arena. The Bucs rushed for 161 yards, on 44 attempts, and held the Seahawks to just 39 yards on 14 attempts. The Bucs controlled the line of scrimmage all day long, and possessed the ball for over 36 minutes, as they built a big lead, and then held on for the victory.

Rookie running back Rachaad White had the breakout day the Bucs had been looking for since being drafted in the third-round of the 2022 draft. He rushed for 105 yards on 22 attempts, including two huge runs for first downs on the Bucs game-sealing drive. His running mate, Leonard Fournette, rushed for 57 yards on 14 attempts, and scored a touchdown before leaving in the third quarter with a hip injury. Even third string running back Ke’Shawn Vaughn contributed with a big catch on a third and long, that resulted in one of the Bucs 26 first downs on the day.

Whenever running backs have success in a game, it’s due to outstanding play by the offensive line, as well as great efforts by the backs. Sunday was no different as the Bucs offensive line consistently opened up big holes for the backs to crease, and protected quarterback Tom Brady so he could take deep shots down the field. Brady was not sacked all day, and only hit one time in his 29 pass attempts.

Brady threw for 258 yards, on 22 completions, resulting in an average of 11.7 yards per completion. That was almost three times as many yards per completion compared to last week’s game versus the Rams. Chris Godwin led the Bucs with six catches for 71 yards and scored his first touchdown of the year. Godwin is finally starting to get back some of his explosiveness he lost due to the ACL injury he suffered roughly one year ago.

Mike Evans caught five balls for 54 yards, with zero drops, and Julio Jones had three receptions for 53 yards, including a 31-yard touchdown that opened the scoring for Tampa Bay. Jones’s touchdown came on a third and 10 play, which previously the Bucs had only converted one out of 32 attempts all season. Rookie tight end Cade Otton continued to emerge, as he caught 3 passes for 35 yards, including a catch that resulted in a first down on the Bucs final drive of the day.

All of Tampa Bay’s scoring drives were 10+ plays, lasted over six minutes, and covered 80+ yards. The final drive of the game was a thing of beauty as well. The Bucs ran the ball four times, threw it twice, and had three kneel downs to close out the victory. Other than a ridiculous wildcat trick play that resulted in a Leonard Fournette interception, and a Tom Brady misread resulting in an INT, the Tampa offense looked like the capable offense we all expected at the beginning of the year.

The Buccaneer defense also played to its capabilities on Sunday. They held Seattle to just 39 yards rushing and allowed only one conversion on nine third down attempts. Seattle had five possessions and five punts in a dominant first half performance by the Bucs defense. They sacked quarterback Geno Smith three times, and forced a fumble in the red zone, which was their first turnover created since week four.

The Seahawks did manage to get two fourth quarter touchdowns, but the Bucs made them work for every yard, and did not have any miscommunications on the day. The effort was substantial throughout the game, and they had a noticeable increase in energy compared to previous weeks.

Linebacker Devin White, who was playing with a heavy heart, led the team with nine total tackles, two sacks, three quarterback hits, and forced a fumble. He looked like the Devin White that was Defensive Player of the Month back in September. Although he has been heavily criticized, and rightfully so, White has shown a real maturity in bouncing back from some bad performances. If he can maintain this level of play over the last part of this season, the Buccaneer defense will be a force to be reckoned with.

Cornerback Jamel Dean had 6 total tackles, one pass defended, and played very well against Seahawks star receiver D.K. Metcalf. Linebacker Lavonte David chipped in with six tackles as well, and defensive back Antoine Winfield Jr. made an impact in his return from injury with five total tackles, and one tackle for loss. Edge rushers Joe Tryon (one sack), and Anthony Nelson (fumble recovery) also contributed mightily on the day.

The kicking duo of Tampa Bay was not needed very much on Sunday, which is a positive. Kicker Ryan Succop missed a 52-yard field goal attempt but made all three of his extra point tries. And rookie punter Jake Camarda only punted twice but managed to average 61 yards on those punts. Kickoff coverage was solid as well, with the Seahawks averaging 20 yards per return, pinning them behind the 25-yard line each time.

The Tampa Bay Bucs are now 5-5 on the season, a full game ahead of the Atlanta Falcons in the NFC South. The Bucs looked like dead men walking after their third straight loss to Baltimore a few weeks ago. But a last-minute comeback against the Rams, and a solid 60-minute effort against the Seahawks, has shown that the Bucs can win the games that matter the most. If the effort stays consistent, and the team (and coaching staff) continues to improve, the last part of this season can very well lead to playoff success.

Tampa Bay is off next week and returns to play on November 27th in Cleveland against the Browns.