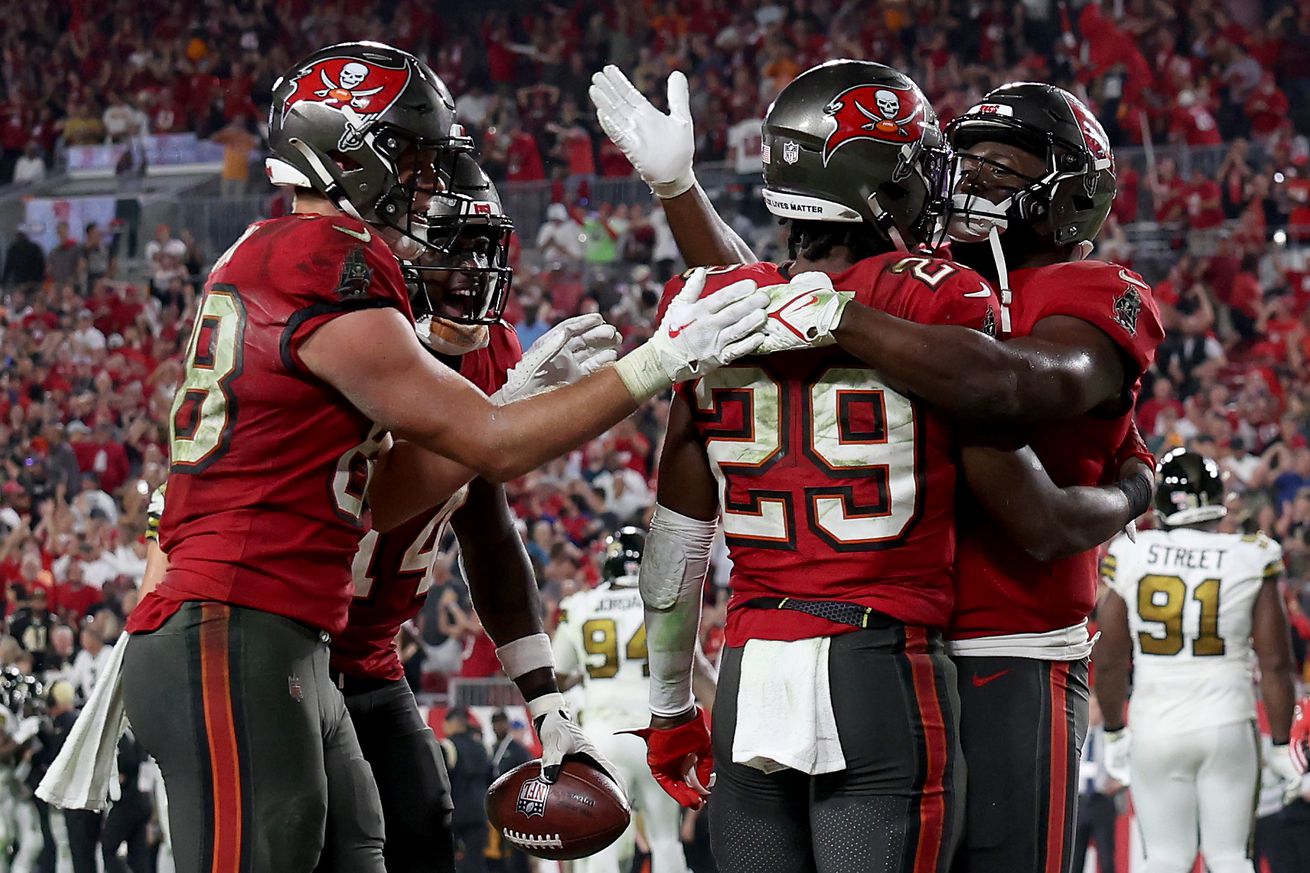 Down by 13 points with only 5:21 to play, it looked as if the Tampa Bay Bucs were about to lose another game to their heated rival, the New Orleans Saints. Miraculously, 5 minutes and 13 seconds later, the Bucs had taken the lead, 17-16, as Tom Brady hit Rachaad White for a game winning six-yard touchdown. It was Brady’s 44th fourth-quarter comeback, which surpassed Peyton Manning for most comebacks in NFL history. It was also Brady’s 56th game-winning drive, which is another NFL record he has on his Hall of Fame resume.

The Buccaneer offense opened the game strong, with a 16-play drive that resulted in a Ryan Succop 21-yard field goal. After that, it was straight downhill as the Bucs continued their season long offensive struggles. They punted five times, had an interception, a kneel down, and a fumble on their next eight drives, before stunningly scoring two touchdowns in the last five minutes of the game.

On those last two drives, Brady went 14-18 for 118 yards and two touchdowns, as the Bucs went hurry up and matriculated the ball downfield with precise passes, and timely runs. On the season, the Bucs rank 27th in overall offense, but they are second in the NFL when it comes to the two-minute offense. When the defense cannot substitute, or disguise their coverages, a Brady led offense is seemingly unstoppable.

Brady completed 36 out of 54 passes for 281 yards, two touchdowns, and had an interception on Monday night. His top target (once again) was Chris Godwin, who had eight catches for 63 yards, and would have had the game winning touchdown if not for a Donovan Smith holding penalty. White, Leonard Fournette, and Cade Otton all hauled in six passes each, with Otton and White scoring touchdowns in the fourth quarter. Mike Evans chipped in with four receptions for 59 yards.

The Bucs continued to struggle on the ground, gaining only 76 yards on 20 attempts, but they did have some key first down runs that kept those last two drives alive. On the night, Leonard Fournette averaged 4.9 yards per carry, which is an encouraging sign. The beleaguered offensive line performed reasonably well considering all the injuries they are dealing with. They only allowed one sack on Brady, and besides the usual Donovan Smith holding penalties, they did their job for the majority of the evening.

On the defensive side of the ball, Tampa Bay was stout against the run (66 yards allowed), and only had one bad miscommunication in the passing game. Unfortunately, that resulted in the Saints only touchdown, as Keanu Neal and Jamel Dean, left Saints all-purpose player Taysom Hill wide open for a 30-yard touchdown in the second quarter. After that mishap, the Bucs defense did a great job in holding the Saints to three field goals, which allowed the Brady magic to happen in the fourth quarter.

Lavonte David led the team with 12 total tackles, two tackles for loss, and added a sack, in an extremely impressive individual performance. Lineman William Gholston had six total tackles to lead the defensive front four, and edge rusher Carl Nassib had a pass deflection, and a huge sack late in the fourth quarter. Safeties Keanu Neal, and Logan Ryan, added five tackles each as they played admirably in place of Antoine Winfield, and Mike Edwards. It was Neal’s hit on Taysom Hill on a third-down play, that allowed the Bucs to get the ball back for their eventual game winning drive.

Tampa’s special team unit struggled a little on Monday night. Punter Jake Camarda only netted a 29.6-yard average, and the punt team allowed a big 42-yard return. Luckily for them, that play did not result in any harm for the Bucs, as the Saints failed to score on the drive. Kicker Ryan Succop made his only field goal attempt, and converted two clutch extra points, as he continued his strong 2022 campaign. The degree of difficulty for an extra point, increases exponentially when the outcome of the game depends on if it’s made or missed.

The Tampa Bay Bucs keep digging themselves into deep, cavernous holes, that seem too difficult to climb back out of. But, when all hope has been lost, they continue to find a way to stay alive for another day. This season looks as if it will be a roller coaster ride from start to finish. There have been tremendous “ups”, and equally as intense “downs” since game one. I don’t anticipate anything different from this team in the last five weeks of the season.

The wild ride continues on Sunday afternoon as the Bucs travel to San Francisco to take on the 49ers. Game time is scheduled for 4:25 PM ET and will be broadcast on Fox.