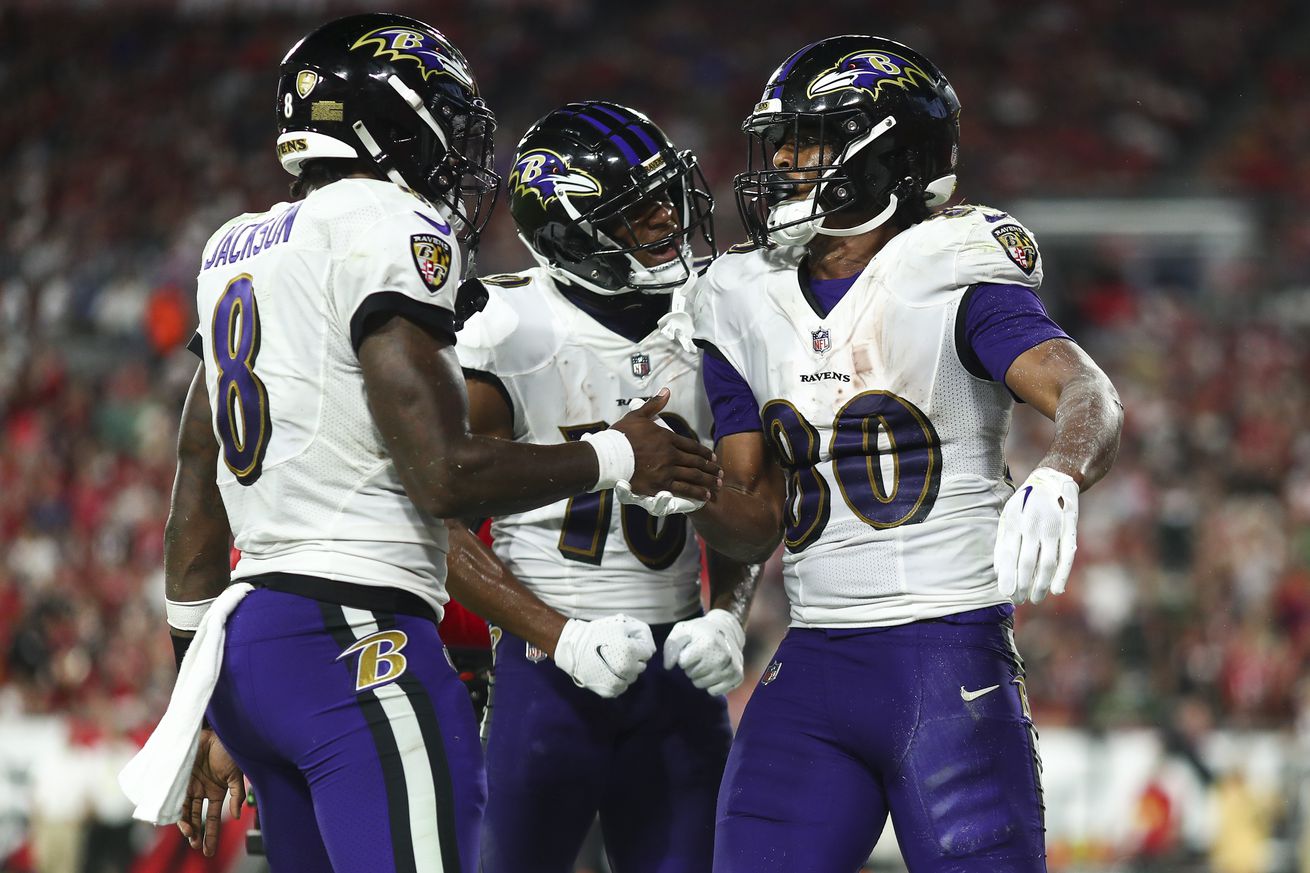 The Tampa Bay Bucs finally scored a touchdown in the first quarter, on their opening drive no less. And, the defense was flying around, full of energy and enthusiasm, as they raced out to a 10-3 lead after the first quarter. Unfortunately, it was mostly downhill from there, as the Baltimore Ravens dominated in the second half, going on to win 27-22 Thursday night at Raymond James Stadium. This was the third straight loss for the Bucs, dropping their record to 3-5 for the season.

Lamar Jackson had 281 total yards and two touchdowns, throwing one of those TDs to rookie tight end Isaiah Likely, who had 6 catches on the night for 77 yards. As a team Baltimore rushed for 231 yards on 33 attempts for an astonishing 7.0 yards per carry. After only scoring 3 points in the first half, Baltimore put together touchdown drives of 77 yards, 80 yards, and 83 yards in the second half. They finished off the night with a 49-yard drive resulting in a field goal that essentially ended the game.

The energy that was present at the start of the game was nowhere to be found for the next three quarters for the depleted Buccaneer defense. Baltimore ran the ball 26 times in the second half, only throwing six passes, and going 4-for-5 on third down.

Safety Mike Edwards lead the Bucs defense with 11 total tackles. Linebacker Devin White had 10 total tackles but spent most of the night being driven backwards by Baltimore’s offensive line. Vita Vea fought off constant double teams to total four tackles and had one of the Bucs three sacks on the night. Edge rusher Shaq Barrett was playing inspired football, totaling four tackles, three of those for losses, and added a sack. All of that came to an end early in the third quarter, when he tore his Achilles tendon, and he will miss the remainder of the season.

Tampa’s offense scored a touchdown on its opening possession, after returner Jaelon Darden and cornerback Dee Delaney ran into each other, which allowed Baltimore to recover a fumble, and kick an early field goal. The Bucs used a variety of formations, and personnel to execute a nice eight play 75-yard drive which culminated in a Leonard Fournette one yard touchdown plunge. It looked as though the Bucs had finally figured out the multitude of issues, they have had during the first seven games.

But, as Baltimore made the necessary adjustments to adapt to Tampa’s gameplan, the Bucs did exactly the same thing they’ve been doing for the last five weeks. Tom Brady attempted 44 passes on the night, completing 26, for 325 yards and one touchdown. In the previous five weeks he has attempted 42, 52, 52, 40, and 49 passes respectively. The Bucs only ran the ball 15 times, which is mind boggling considering the success they had on the opening drive, and the fact that Baltimore is not great as a run defense.

Mike Evans led the Bucs receiving core with six catches for 123 yards on 11 targets. He did drop a pass the hit him right between the one and the three, which would have resulted in a big play. He also mysteriously ran the wrong route, or didn’t look for the football at all, at least three times during the contest. It is inexcusable for him and Brady to be out of sync after three years in the same offense.

Chris Godwin also had six catches for 75 yards on 11 targets, and Julio Jones made an appearance, catching a touchdown in the fourth quarter that made the score look closer than the game truly was.

The lack of creativity with play calling in the red zone meant that the Bucs were kicking field goals (again) instead of scoring touchdowns. Kicker Ryan Succop was 3 for 3 on his field goal attempts as he is now 19 for 20 on the season. Rookie punter Jake Camarda also continued his strong campaign, booting five punts for an average of 53.4 yards.

Comparing the Bucs season to the sinking of the Titanic, is poetic justice since there’s an actual pirate ship in Raymond James. The one comparison that sticks out between the movie, and the Bucs, is the scene where the violinist, and his bandmates, calmly play music while the world is crumbling around them. To me, this perfectly exemplifies the attitude of head coach Todd Bowles.

I’m in awe of how he can watch his run defense get mauled week after week, and refuse to make any adjustments, personnel changes, or at least raise his voice in an attempt to inspire some change. It is equally fascinating to me that he allows offensive coordinator Byron Leftwich to throw 50 passes a game with a 45-year-old quarterback, without a hint of diversity in the gameplan.

This shipwreck of a season continues next Sunday at Raymond James, with a 4:25 PM ET kickoff against the Los Angeles Rams.