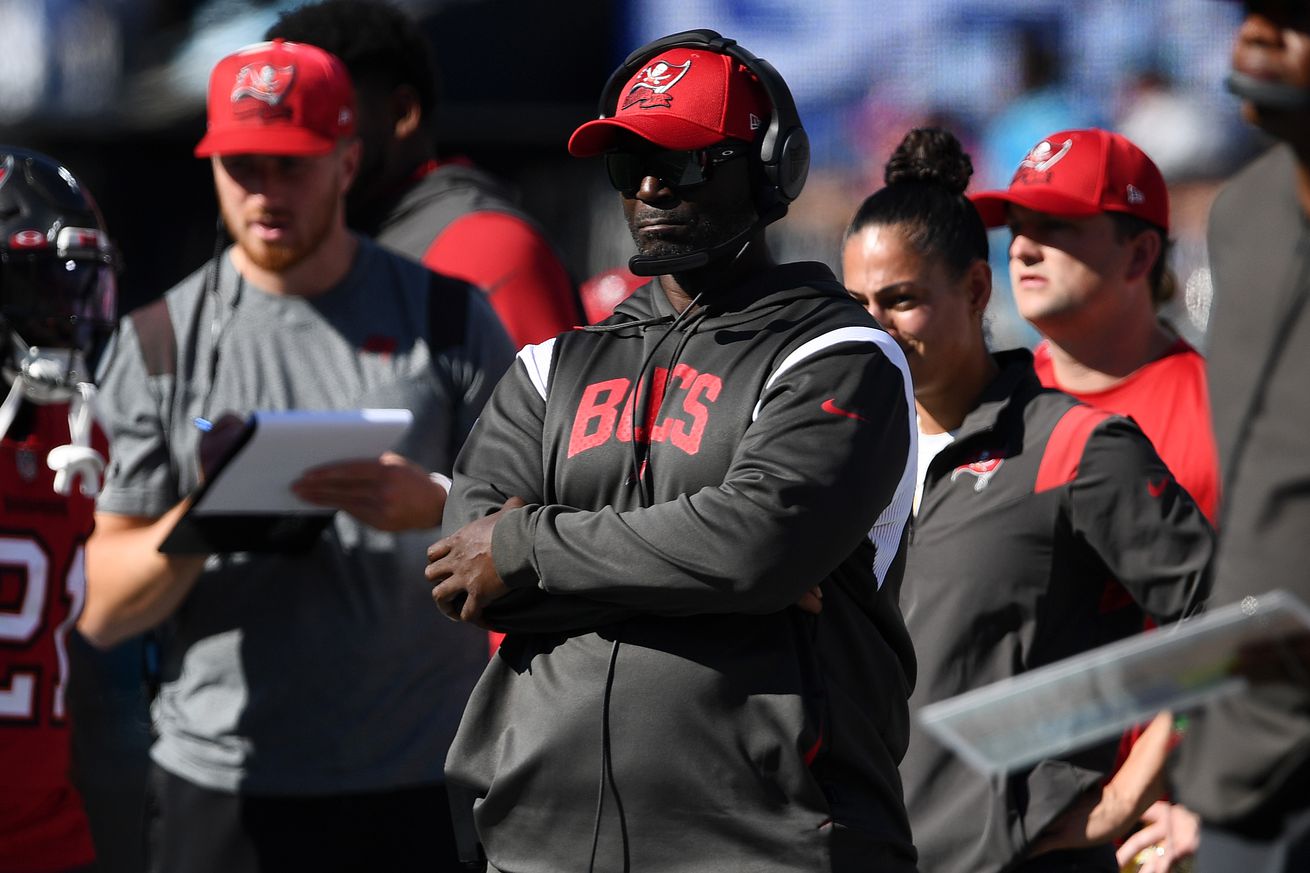 Todd Bowles and Byron Leftwich have shown us who they are, and it’s not pretty.

I hoped I wouldn’t have to write this at all, let alone before November. But here we are facing a sober reality: through seven weeks, the Bucs are one of the worst teams in the NFL, and their coaching staff is overwhelmingly to blame.

After the offseason melodrama that resulted in Tom Brady retiring and promptly unretiring, Bruce Arians’ own retirement, and Todd Bowles’ subsequent promotion, the ship definitely rocked but seemingly steadied for at least one more year in Tampa as a largely intact roster aimed for one more shot at greatness.

After all the praise Arians heaped on his trusted assistants, Bowles and offensive coordinator Byron Leftwich, over his entire duration at the helm, people felt right to feel okay. Leftwich reportedly played a big hand in shepherding a prolific offense, and everyone knew about Bowles’ high-floor defensive units.

The latter faced questions about his horrific time as New York Jets head coach, which saw him win 24 total games in four seasons (10 coming in one fluke year), but he was granted infinitely better working conditions in Tampa — a team stacked with talent on both sides of the ball and an established culture he only needed to maintain, not build himself.

Bowles received something almost nobody ever gets in the NFL — the keys to a well-running Ferrari. Drive it steady, and performance should take care of itself.

Well, we’re nearly halfway into the 2022 season and Bowles and Co. have done their best to run the Ferrari directly into a goal post.

After the franchise’s embarrassing, inexcusable defeat at the hands of the previously 1-5 Carolina Panthers, a team that has already fired its head coach and literally just traded away its best offensive player in Christian McCaffrey, it’s hard to feel good about how anything is going right now.

The offense, still gushing with talent across the board, is completely inefficient. It cannot move the ball consistently or run with any semblance of competency, and limited creativity makes it harder for everyone to perform at an optimal level. Players are not executing, and they absolutely share blame. Tom Brady has looked shaky, as have all of his weapons, at times. The offensive line is hurting without Ali Marpet and Ryan Jensen, as rookie Luke Goedeke has played so poorly that he finally got benched against Carolina.

Ultimately though, players like Brady, Mike Evans, Chris Godwin, and Leonard Fournette all performed much better when Arians oversaw their preparation. And again, the playcalling has been criticized by major analysts, fan and even players, both current and former. Former linebacker Jonathan Vilma, who called the game for FOX, was literally diagnosing exact plays from the press box.

If you want stats, I could dig up a plethora to demonstrate how objectively terrible this team has been. Entering the game, the team ranked in the both third of every major offensive category, including: points per game, 20.2 (21st); yards per game, 332 (21st), third down conversion rate, 37.8% (22nd); and touchdowns per game, 1.8 (24th). The rush offense has proven to be one of the worst in NFL history to this point, averaging a pitiful 67 yards per game, good for last in the league. On third and fourth downs that need just 1 yard or shorter, they were 29th in the league entering the week, converting just 8 of 17 chances.

That was all before the 3-point outing on Sunday, when 6 of all 11 drives ended in punts and the others (omitting the field goal) were turnovers on downs. Check the updated stats again on Tuesday, and it’s all going to look even worse.

Leftwich’s decision making, influenced or not by Bowles, has been infuriating to witness week to week. There’s been easily diagnosed running plays and concepts, refusal to attack the intermediate and deep parts of the field in the passing game, an over-reliance on screens to Chris Godwin and the running backs, throwing short of the sticks on critical third and fourth downs, etc.

Even more worrisome is the refusal to be accountable or significantly change the approach. The Bucs are the only team in the NFL who haven’t scored a touchdown in the first quarter. A big part of that is an ineffective opening script, which again stems from failure to properly prepare and understand how to use players when attacking the opposing defenses.

It’s clear that Arians vastly understated how pivotal he was in week-to-week preparation. Without his mentor’s guidance, Leftwich looks lost and there have been no traces of it getting better.

The team needs to seriously consider in the coming weeks if a coaching change is in order. An extended week after the upcoming Thursday night tilt against the Baltimore Ravens will likely be a pivotal factor.

Even then, I’m not sure that will change much in the long run.

It’s far from set in stone, but Bowles has coached himself into impending peril for myriad reasons. The Bucs have won 24 regular season games over the last two seasons, not to mention their Super Bowl run, one of the best stretches in franchise history. To go from that to a losing record while looking like one of the worst teams in football through the month of October is unjustifiable.

The defense has generally played but has cracked when it really needed to step up. It’s been horrid on third down, allowing a 42.7% conversion rate (22nd). The once stout run defense has crumbled into a mid-tier unit largely thanks to unsatisfactory from play from stalwarts like Vita Vea, William Gholston, and Devin White. Where is the accountability?

In what was the most embarrassing loss for this team in three years, well prior to Carolina anyway, the defense allowed three straight 3rd and long conversions against the Pittsburgh Steelers while down 20-18 late in the fourth quarter. One stop against a backup QB in Mitch Trubisky was all they needed, and they failed.

That should’ve been the switch flip. It’s understandable to lose a close game to the Green Bay Packers, and the Kansas City Chiefs remain daunting so that defeat wasn’t exactly a shock. But Pittsburgh? Everyone knew there needed to be a swift response, and the Panthers were the perfect punching bag.

Instead, they jabbed at that punching bag and got blasted off their feet on the recoil.

Good coaches don’t allow that to happen, pretty simple. No staff league-wide has done less with more this year, and it’ll only look worse if the Ravens come into Tampa and steamroll this reeling team. What will be Bowles’s defense then? Why should he get the benefit of the doubt?

He didn’t need to build the roster, it was already constructed. He didn’t need to establish a culture, they were already winners. He’s not a first-timer getting his feet wet, this was his third stint leading a professional football team — don’t forget he interim coached the Miami Dolphins back in 2011.

Pending a miracle turnaround, the Bucs are shambling through one last chance to get a Super Bowl before we start tossing around a word we’re all too familiar with: rebuild. As it is, do we want this staff leading that effort? Not sure you’ll find much support for that currently, but I guess we’ll see what the front office and ownership thinks in a couple months.

The hope that the Bucs would barely glide under their closing championship window is quickly evaporating. Now, they’re just trying to keep it from slamming shut on their necks.