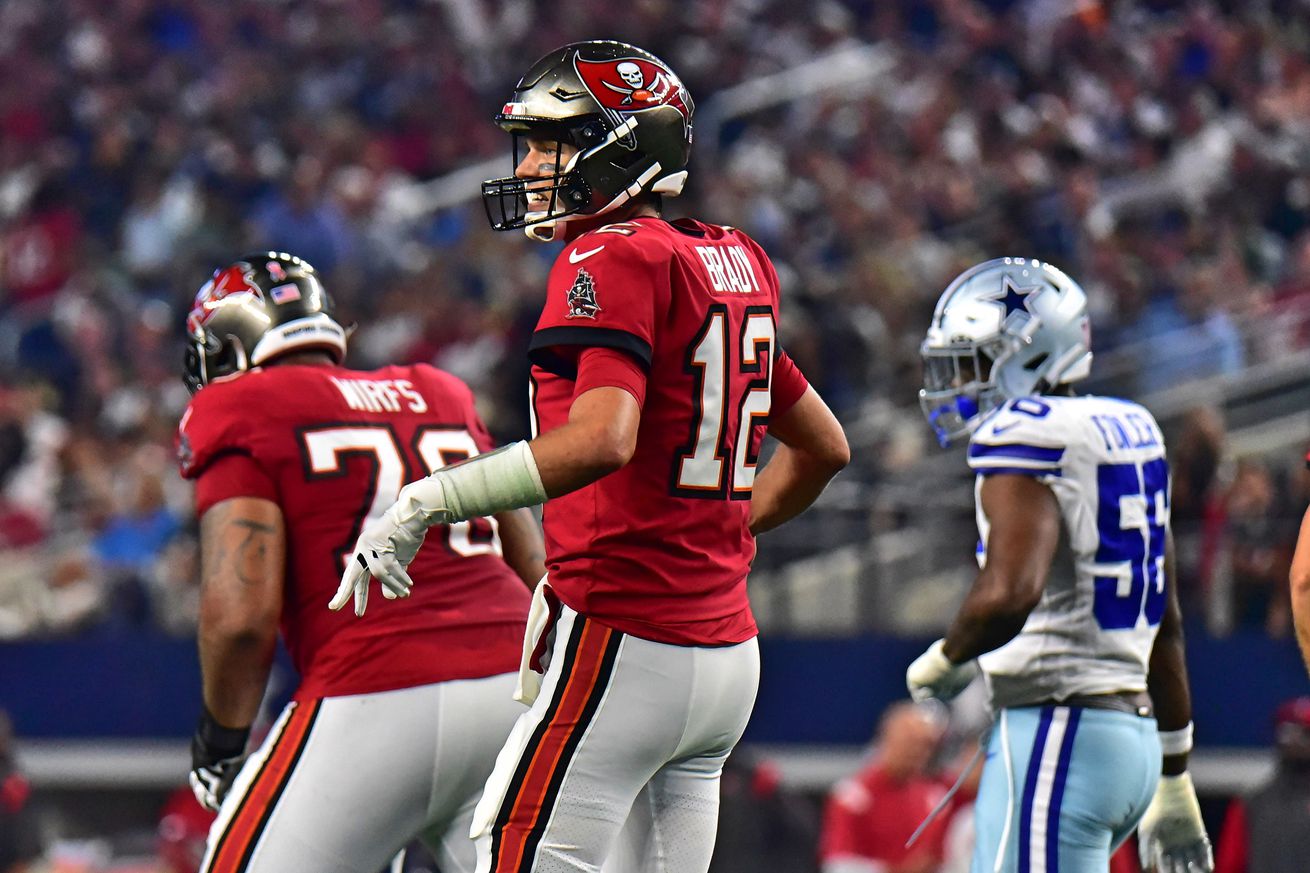 The Tampa Bay Bucs have put the regular season behind them. It no longer matters that the team won the NFC South with a losing record. It no longer matters about the offensive struggles throughout the season. The injury issues are out the window. Everyone is 0-0 and a new season starts now.

The biggest question is the status of Ryan Jensen. He’s been practicing but there have been no indications that he will play. Robert Hainsey – who filled in for Jensen all season – got hurt against the Atlanta Falcons last week but seems to be well enough to play if needed this week. The Bucs, of course, are hoping that his services won’t be needed and that Jensen will get the green light.

For Tom Brady, the postseason accomplishments speak for themselves. 7-3 in Super Bowls, 35 playoff wins – as many as the Dallas Cowboys as a franchise – most playoff wins as a quarterback in Bucs’ history, most passing yards and passing touchdowns by a quarterback in team history – the list goes on and on. This time around, he’s coming in as an underdog where he’s 4-0 in the playoffs since 2019.

Of course, there’s also the streak of 7-0 when facing the Dallas Cowboys which has been talked about quite a bit leading up to this game. Brady and the Bucs have beaten the Cowboys in each of the last two seasons and this will be their third meeting since September 2021. All the makings of a classic and a reason it was chosen as the Monday night spotlight.

The problem for the Bucs is the fast and physical Cowboys defense. Micah Parsons is an absolute monster who got to Brady twice in week one and injured Donovan Smith (not intentionally) early in that game when Smith couldn’t contain Parsons and hyperextended his elbow. Parsons finished seventh in the NFL with 13.5 sacks on the season while the Cowboys finished fifth in the NFL in scoring defense (20.1 points per game), eighth in passing defense (200.9 yards per game), and 22nd in rushing defense (129.3 yards per game). They also led the NFL with 33 takeaways, second in turnover differential with a +10, and were third in the NFL in sacks with 54.

The Bucs have a league best sixteen games since 2020 without allowing a sack and finished the year allowing a league low 22 sacks on the year – even with the musical chairs of backups along the offensive line. Granted, the pocket time hasn’t been great – Brady averaged just 2.2 seconds of pocket time this season – but that’s been one of the reasons for so many passes thrown away or the errant passes that went either incomplete or intercepted. It’s simply been that Brady is getting rid of the ball to not get hit. Certainly one of the benefits of having Brady under center.

In their first meeting this season, the Bucs won 19-3, holding the Cowboys to just 71 rushing yards and 173 passing yards as Tampa Bay ran all through JerryWorld for 152 yards while Brady finished 18/27 for 212 and a touchdown. The Bucs defense also sacked Dak Prescott twice before he exited the game then proceeded to sack his backup, Cooper Rush, two times as well.

One of the advantages the Bucs will face is the lack of depth at cornerback for the Cowboys. Conventional wisdom would tell you that Trevon Diggs will be on Mike Evans most of the day, but Dallas could be forced to rely on Xavier Rhodes to cover the likes of Chris Godwin or Julio Jones – or even an emerging Russell Gage – giving the Bucs a huge advantage to attack him all day long. Rhodes is merely a shell of what he was in Minnesota and isn’t even what he was in his brief stint with Indianapolis. Brady will look to Godwin early and often in this one while also testing if the Bucs can recapture that rushing attack magic they had in week one.

The Cowboys lead the all-time series 15-6 but the Bucs have won three of the last four including the last two at Raymond James Stadium.

According to DraftKings Sportsbook, the Bucs are 2.5-point home underdogs to the Cowboys with an over/under of 45.5. The underdog has won four of the Bucs’ last five playoff games while the Cowboys have failed to cover the spread in nine of their last ten games in the month of January. Six of the last seven between these two teams have hit the under.

The Bucs and Cowboys will kickoff Monday night at 8:15 p.m. ET inside Raymond James Stadium. The game will be broadcast on ESPN and ABC with Joe Buck, Troy Aikman, and Lisa Salters on the call.