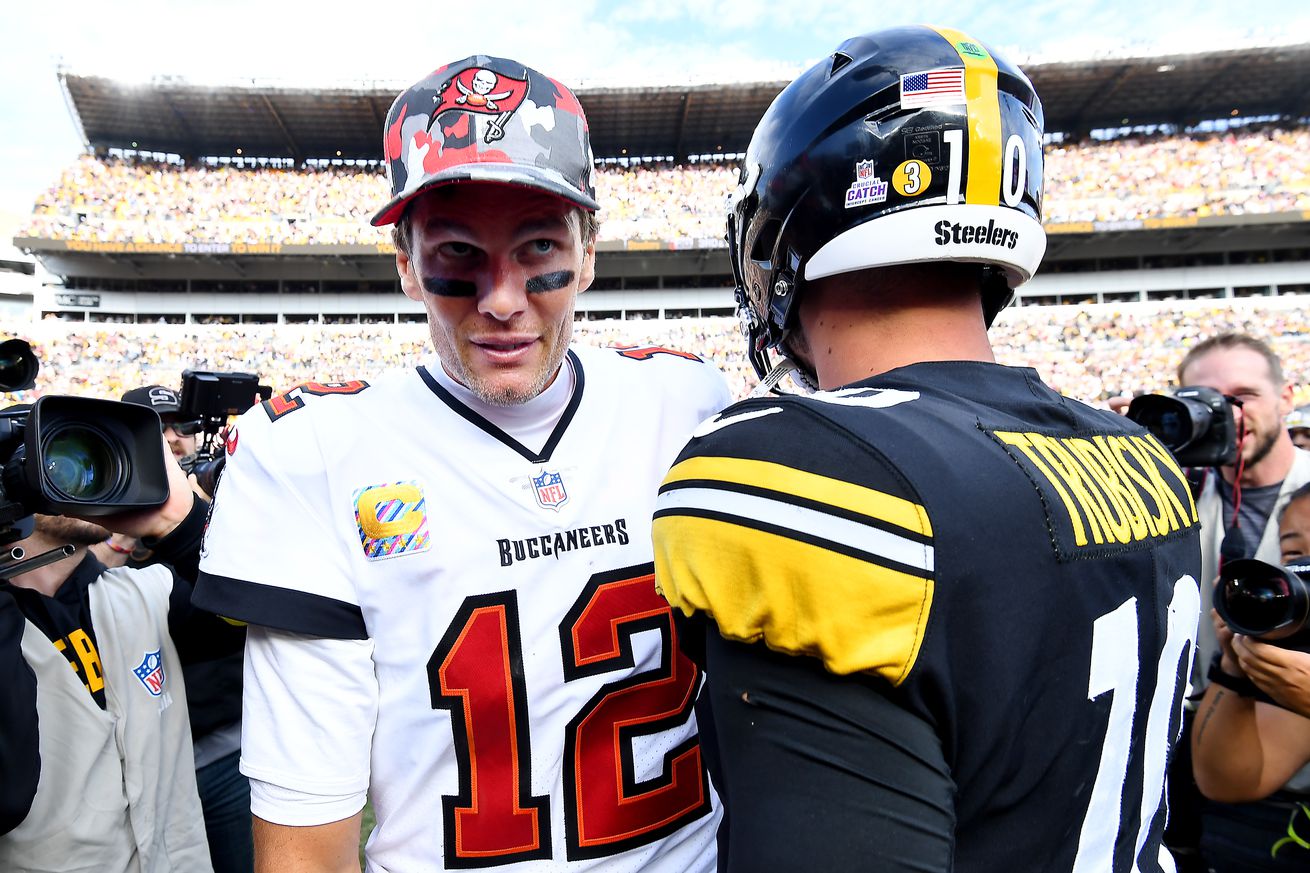 Okay, let me just get out in front of this right now… most of these predictions are dead wrong. Don’t blame the Bucs Nation staff, blame the actual football team. The Bucs lost to the Pittsburgh Steelers on Sunday by a score of 20-18. This game could be considered the worst loss the Bucs have had in the Brady era, not by stats necessarily, but the level of competition they were playing against. An inexcusable performance from this team last Sunday.

Anyways, this season, we are going to be analyzing each prediction and see if it was on the money or off the mark. Let’s get into it.

“This is a big game for the Bucs because they can’t afford to lose to a lesser opponent. With that said, it’ll be an all-around terrific performance in all phases of the game for the Bucs. Tampa Bay will get their running game going and control the clock while scoring two touchdowns. Defense matches them with two touchdowns of their own via interceptions taken to the house.”

Unfortunately, the defense could not muster up a single turnover and the offense could not get the run game going. Instead of it being an all-around performance for the team, they were pretty brutal in all three phases besides the kicking game. Yeah, I think you can tell th way the rest of these prediction reviews are going to go.

“The Bucs have had a dreadful time trying to stop the run this season and have fallen to 18th in the NFL in rush defense. This week, they take on last year’s rookie standout Najee Harris who is dealing with his own struggles. One of these two sides is going to get back on track against one another and I’m banking on the Bucs figuring things out.

The Bucs will hold the Steelers to less than 60 team rushing yards while Harris ends up with less than 30 of them.”

Yarcho was close on this one, but just a little off. The Steelers did not run all over the Bucs, but they did manage to get 77 rushing yards and Najee Harris finished with 42 of them on 14 carries.

Evan Wanish: A day to remember for the rookies

“The Bucs 2022 rookie class has been progressing slowly but surely so far this season. On offense, players like Rachaad White and Cade Otton have seen increased playing time while Logan Hall has had to step up due to Akiem Hicks’ injury on the defensive side. Give me both White and Otton each scoring a touchdown in this one with Hall having a sack or two on the other side of the ball.”

What a huge swing and a miss here from me. White finished with four carries for 12 yards and had three catches for 11 yards through the air while Cade Otton managed two catches for 23 yards. On the defensive side, Logan Hall did not even show up on the stat sheet and only played 19 snaps in the entire game. Instead of a day to remember, it turned out to be one they would all like to forget.

Mike Kiwak: Ought to watch Otton

“I’m clearly bad at predicting defensive performances so let’s shift back to the offense for this week’s road trip. Rookie Cade Otton’s role in the offense has been gradually expanding the last few weeks, as he looked good as the primary option against Atlanta with Cameron Brate injured. He officially moved up to TE2 on the depth chart, and his upward progress likely isn’t finished. One week after catching six balls for 43 yards, Otton shows out again with approximately five catches for 50 yards and his first NFL score.”

I highlighted Otton’s day in the above prediction. He almost did have his first NFL touchdown but it was batted away at the last second. With Cameron Brate suffering a neck injury in this one, Otton could see more playing time in the coming weeks.

Will Walsh: Godwin has a big day

“The Bucs invested long-term in Chris Godwin this offseason and every dollar given was a dollar earned. Godwin has been a consistently reliable threat who rose through the ranks from backup to starter and then starter to star. Coming off a serious knee injury while battling a hip and a hamstring, this season has started slow for the 26 year old. He has only had over 60 yards receiving one time in three games played and hasn’t found the end zone yet in 2022. This week Chris Godwin will start to look like Chris Godwin again, 9 catches for 80 yards and a touchdown as the Bucs roll to a big win in Pittsburgh.”

Shout out to Will for being the closest on his prediction. Godwin finished the day with six catches for 95 yards but did not find the endzone. Godwin appears to be back to full health so that is certainly a positive sign.

“I got this prediction wrong against the Kansas City Chiefs (-3) but I am coming back to it against the Steelers. The Bucs secondary has looked very good this year (minus a game against the Chiefs) and I feel they will intercept rookie QB Kenny Pickett THREE TIMES on Sunday. Let’s give one to Antoine Winfield Jr., one to Jamel Dean, and one to Devin White for good measure.”

Not only did the Bucs not get any turnovers, they rarely even got their fingers on the ball. Devin White seemed to be all over the place in coverage except for where he was supposed to be, while Winfield and Dean had nice days, they did not secure any interceptions.

“The Tampa Bay Bucs (-11) have been an NFL franchise for 47 years. In that time, they have returned 11 punts, and four kickoffs for touchdowns. This week against the Steelers, they will add a touchdown to one of those totals. With injuries across the board on offense, and defense, I see one of Tampa’s return men to make a huge play and spark the Bucs to a road victory in the steel city. I’ll go with Jaelon Darden to finally flash his big play potential with a 60+ yard punt return touchdown.”

I appreciate the bold prediction from Chris here, but Darden did not have a good day on Sunday. He was tentative to field some punts which led to poor field position and when he did catch the punts, he often chose the wrong lane to run through. The Bucs return game has not been anything special this season.

Tampa Bay is now 3-3 and are facing a reality check this week. They play a struggling Panthers team this week in a must win game. Hopefully they can clean stuff up and play good football.