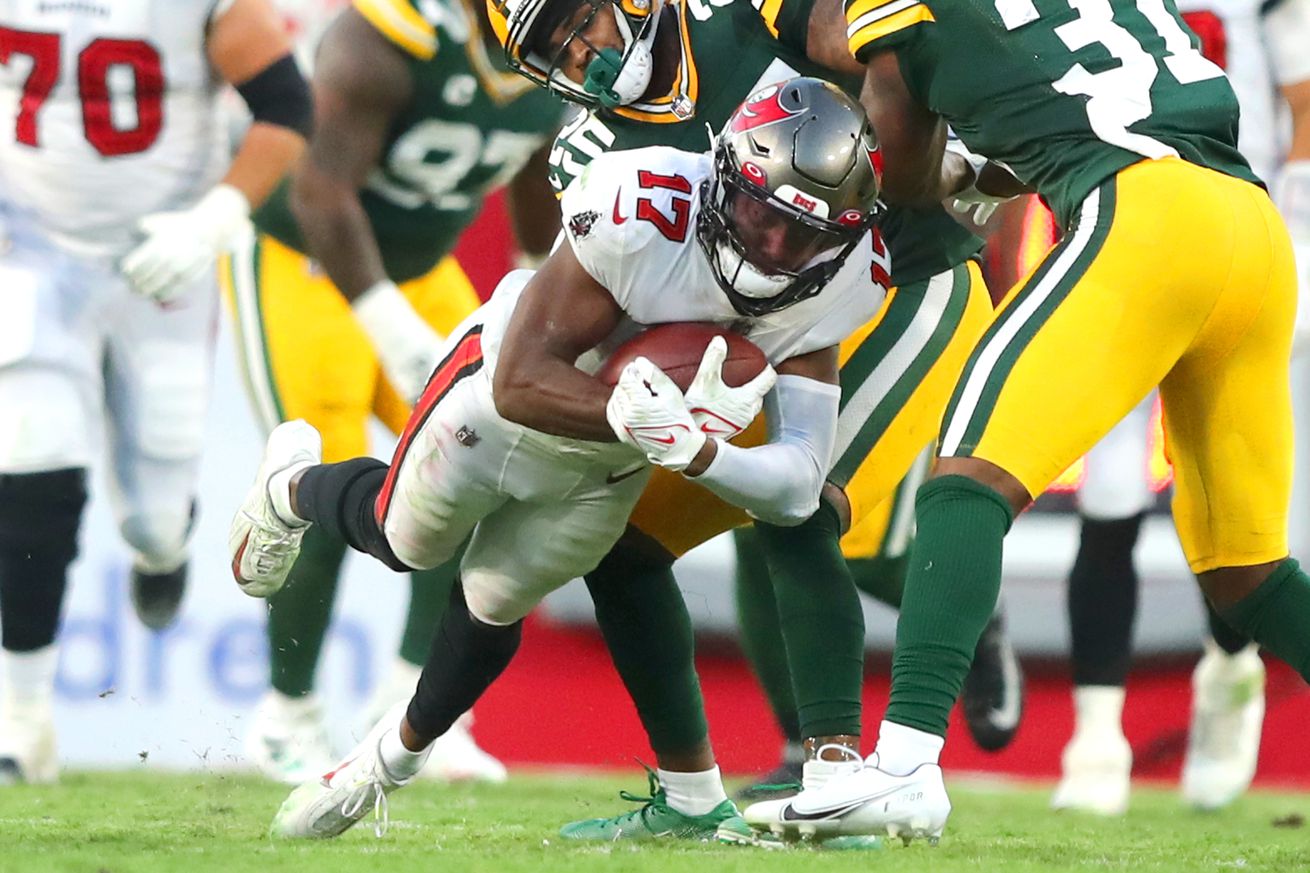 The Bucs have suffered their first loss of the season, falling to the Green Bay Packers 14-12 in a game that had a lot of missed opportunities for Tampa Bay. Despite all of the injuries and inconsistent play, the Bus still had a chance at the end but came up short. The Bucs Nation staff made predictions before the game.

This season we are going to be analyzing each prediction and see if it was on the money or off the mark. Let’s get into it.

“OK. I have sucked pretty bad thus far this season in my predictions and not even coming close. So this week, I am going with what I truly feel will happen. Aaron Jones and A.J. Dillon are tremendous out of the backfield in both run and passing games. But this week, Tampa Bay will hold Green Bay’s rushing attack to under 100 yards after seeing almost 200 yards last week from their talented duo and stuff them often at the line of scrimmage.”

Gil finally got a prediction on the money as while the Bucs lost, they still were able to keep the Packers running back duo in check as Aaron Jones and A.J. Dillon combined for 67 rushing yards. The Bucs also forced a fumble out of Jones. It was a successful day for the Bucs run defense.

“There’s no question both of these teams have had issues in the passing game through two games this season. That doesn’t look to change for either side this time around. With Rodgers still trying to get comfortable with his crew off pass catchers and Brady’s receiver room looking like a MASH unit, both teams will look to their running backs for help. Neither quarterback in this game will surpass 170 passing yards nor will they have a passing touchdown”

Yarcho was off with this one as both Tom Brady and Aaron Rodgers got well over 170 yards passing and Rodgers ended up with two touchdown passes while Brady had one. Both defenses played well, but they did give up a little bit through the air in this one.

“Through two weeks, the Bucs have put a heavy emphasis on running the football. After a strong performance in week one, Leonard Fournette did not have the same success against New Orleans. Fournette has had a ton of usage so far this year, but one thing Fournette has not done yet this season is score a touchdown. Look for Fournette to bounce back with at least 80 rushing yards and a rushing touchdown this week.”

I was way off with this one. Not only did Fournette not find the end zone, he only carried the ball 12 times for a total of 35 yards. There was just nothing going for the Bucs on the ground in this game and their plans of establishing the run had to go out the window once they got down two scores. Fournette will have to wait another week to potentially get his first score of the season.

“Shaq Barrett is off to a torrid start this season, as he’s currently sixth best in pass rush win despite getting double teamed at an above average rate per ESPN. He terrorized Jameis Winston all day long last week, and I predict he does even better against the Green Bay offensive line and a rusty Elgton Jenkins. Put Barrett down for three sacks, another forced fumble and multiple QB pressures as he singlehandedly wrecks the Packers’ passing game.”

After a really good start to the season, Barrett cooled down in this one and only recorded five tackles and did not record a sack. Rodgers did a nice job of escaping a few sacks in this game but this is definitely not Barrett’s best game regardless.

“The Bucs are 2-0 thanks to the top ranked defense in the NFL. I expect the defense to continue their stellar play this week, and in the upcoming weeks. But, in order for Tampa Bay to contend for a championship, the offense needs to become more consistent, and make plays in the red zone. Although there are a ton of injuries on the offensive side of the ball, the Bucs still have Tom Brady at quarterback. I expect Tom to make one more play than Aaron Rodgers and lead the Bucs to a hard fought 17-13 victory.”

Unfortunately, Brady was unable to make more plays than Rodgers largely because of the lack of weapons the Bucs had at their disposal on Sunday. Brady played well under the circumstances but it just simply was not enough. Brady finished 31/42 for 271 yards and one touchdown.

Will Walsh: Brady vs. Rodgers is actually Fournette vs. Jones and Dillon

“Tom Brady and Aaron Rodgers both enter Sunday’s game with lesser receiving cores than what they are accustomed to and as a result, both have looked like less than their peak selves this season. Leonard Fournette has seen over 20 carries in each of the Bucs first two games. Between both Jones and Dillon, the Packers have run the ball 48 times so far this season. While Fournette is averaging a healthy 4.3 yards per rush, the Packers committee dwarfs those numbers with Jones averaging an impressive 9.1 by himself. In a game headlined by two hall of fame quarterbacks it will be the running backs that will decide the outcome. The team whose runner(s) consistently move the ball wins.”

Will’s prediction here was pretty accurate. While the Packers did not have a ton of success on the ground, they outgained the Bucs run game by 33 yards. The Packers finished with 67 yards on 25 carries while the Bucs had only 34 yards on 14 carries. Green Bay was able to be consistent and that helped win them the game.

“The Bucs are currently very banged up at WR. Julio Jones and Chris Godwin are still dealing with injuries and Mike Evans is dealing with a suspension due to a brawl with Marshawn Lattimore in week 2. Because of this Russell Gage is in line for a healthy amount of snaps and this is where I think Gage finally starts to show his potential in this offense. I believe Gage will finish the game with over 100 yards and 2 TDs in the week 3 matchup vs the Packers and reminds Bucs fans that he’s a very talented receiver as well.”

Another solid prediction here as Russell Gage did get going a bit in this game. Minus a fumble earlier in the game, Gage was very productive for Tampa on Sunday and he finally showed why he was brought to Tampa. Gage was Brady’s favorite target on the day and while he did not have over 100 yards, he did end up reaching the end zone once for his first as a Buccaneer. Gage finished with 12 catches for 87 yards and one touchdown.

Look, the Bucs were not going to go undefeated this season, but this loss was certainly disappointing and could hurt them later on in the year when it comes to playoff seeding. Hopefully the Bucs can get their offense healthy soon and get on a roll here soon.