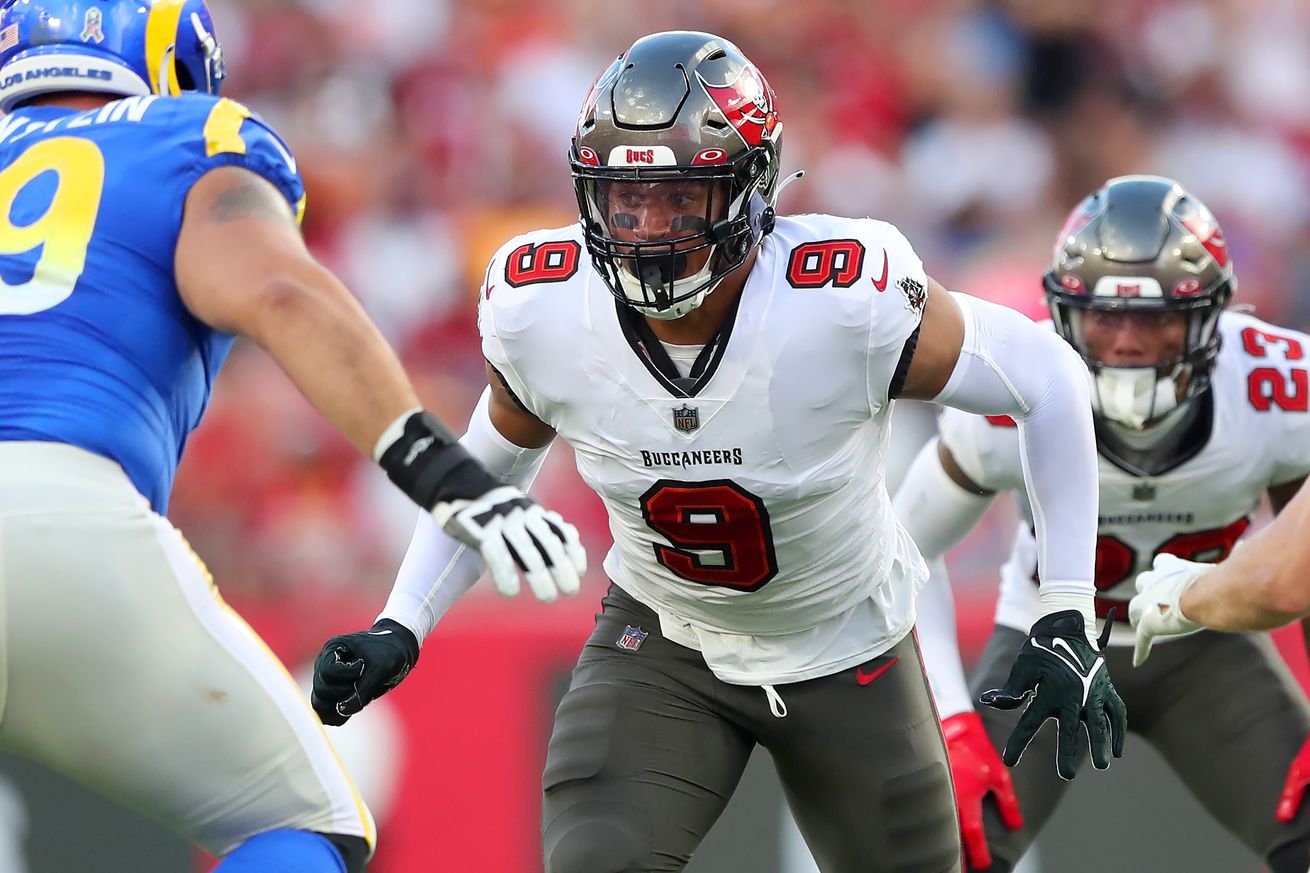 The Bucs finally won a football game! They were able to snap their three game losing streak with a thrilling 16-13 victory over the Los Angeles Rams. They are now 4-5 on the season and look to build on this momentum.

“This game is hard to set predictions for. Both offenses have not done well this season. Defenses have been up and down. And their overall records reflect who they have been in 2022.

So with that said, I’ve got nothing other than one thing. With the loss of Shaq Barrett, JTS may be moved around more along the line. Second-year edge rusher Joe Tryon-Shoyinka will get to Stafford twice for two sacks and possibly force a turnover in the backfield. That’s all I got. *throws hands up*”

Gil’s line of thinking here was correct, but unfortunately JTS did not come up with a sack although there were a few times where he came close to getting home. With Barrett down for the year, let’s hope Tryon-Shoyinka takes this opportunity to develop.

James Yarcho: Taking the Ram by the horns

“Matthew Stafford has been sacked 24 times this season and he has more interceptions than touchdowns. The last two Super Bowl champions are both desperate for a win to keep their season alive and the Bucs are welcoming back some help.

With the return of some key defensive players, we’re going to see a performance more like the early part of the season than what we’ve seen over recent weeks. The Bucs get three sacks and three takeaways in this one.”

The Bucs did well on half of this prediction as they had four sacks on the day. They did not have any takeaways though and that is still very concerning despite the good day the defense had. The Bucs struggles this season have not been solely on the defense, but if Tampa Bay wants to turn it around in a big way, the defense is going to need to force turnovers. They have not had a turnover since week four against Kansas City. Good outing for the defense, but need to get those turnovers more often.

“At this point, I can’t believe in the Bucs staging any kind of remarkable turnaround until they prove they’re malleable enough to actually address their season-long issues. Meanwhile, we still have Byron Leftwich talking about how play action doesn’t work unless you establish the run, which is demonstrably false, so I’ll keep holding my breath. Even though Halloween is over, I’m going to wear my Negative Nancy mask and predict the downward spiral continues. Tom Brady has been the league’s best at avoiding turnovers through eight games, but he’ll throw his second and third interceptions on Sunday to a player who got torched in last season’s playoffs — Jalen Ramsey. Mike Evans usually shows more good than bad against Ramsey, but Brady forcing the ball in an attempt to jumpstart the offense will be to Ramsey’s benefit and the Bucs’ detriment.”

To the Bucs pleasure, Ramsey was quiet for the most part on Sunday. Tampa Bay rarely tested the Los Angeles secondary, but the Rams also were playing pretty soft for the most part. Ramsey did not get torched for a deep ball like he did in last year’s playoffs, but he also did not have the day Mike envisioned here.

Will Walsh: This week the Kupp will be empty.

“The Rams and the Bucs have underachieved this year and this game will be a question of pride, who is going to be bothered the most by the fact that their team is playing far beneath expectations? For Tampa, there is at least one obvious way to lose this game, Cooper Kupp. In his last three games against the Bucs, Kupp has compiled 29 catches for 424 yards and 3 scores. 183 yards and a touchdown last post season, ended Tampa Bay’s hopes at a Super Bowl repeat. Since that moment, in January, everything has turned upside down for the Bucs. The quasi-collapse of Tampa Bay in 2022 can all point back to Cooper Kupp. Tampa has not looked the same since. The Bucs need to exercise some demons on Sunday. Demons from the current three game losing streak they are riding and demons from the last season. Two interceptions for Tampa and Cooper Kupp is under 80 yards at the final whistle.”

Maybe the Bucs exercised some demons just by winning the game? Because Cooper Kupp still did Cooper Kupp things against Tampa Bay. He had eight catches for 127 yards including a 69 yard touchdown reception. Kupp continues to haunt the Bucs, but I think they would be OK with letting him get his as long as the Bucs came out on top, which they did in this one.

Chris Weingarten: Something has to give

“The last two teams to win the Super Bowl have played nothing like Super Bowl champions in 2022. To say both teams have been disappointing, is clearly an understatement. I don’t believe either team will turn things around this year and make a serious push for another championship. But someone has to win this week (or maybe it’s a tie?) and I’ll go with the hometown Bucs to get their first win in a month. Tom Brady throws for 250+ yards and two touchdowns, as the Bucs show they have a pulse, with a 20-17 triumph over the Rams.”

Chris was super close on this one as Tom Brady threw for 280 yards and the Bucs did end up winning by three, but Brady only threw one touchdown and the game was a little lower scoring than that. Luckily though, the one touchdown that Brady threw was the one that mattered the most and it gave the Bucs a much needed victory.

4-5 still is not the place many fans and analysts expected this team to be at this point in the season, but there is a huge difference between 4-5 and 3-6. One puts you right back into first place in the NFC south, the other essentially ends your season. There is still a ton of work to be done for this Bucs team, but being able to come out with a win against a team you have struggled to beat in the past sure does have to feel pretty sweet.