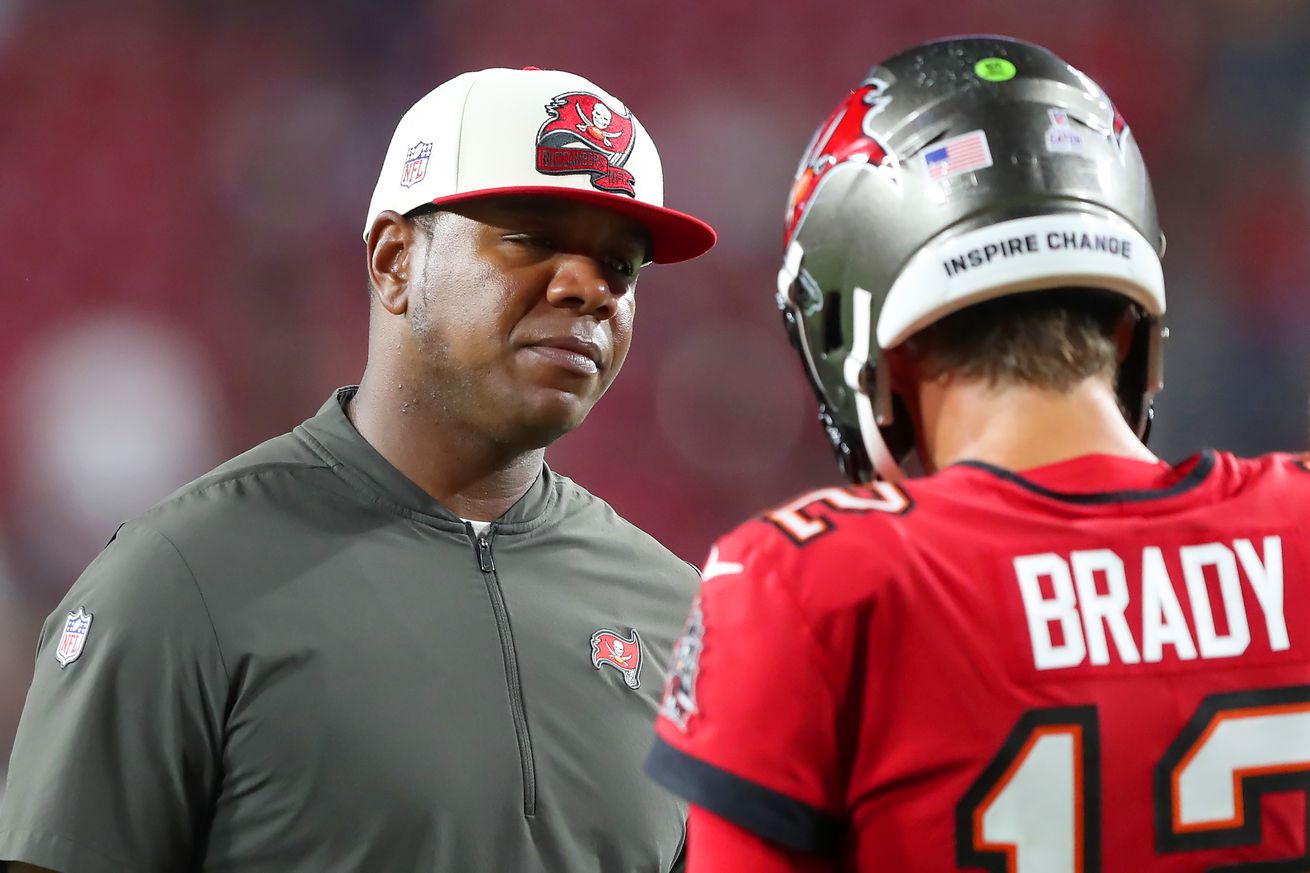 The BucsNation Staff made their predictions for the game. How right or wrong were they?

Dark days are indeed upon the Bucs right now as they dropped their third straight game as their record fell to 3-5 after losing to the Baltimore Ravens 27-22. This Bucs team is just playing such uninspired football right now and it is tough to see how they turn this around quickly.

“Everyone wants to see the Bucs succeed. But that isn’t remotely close to what has gone on in recent weeks. At 45 years old, many have praised quarterback Tom Brady for still being in playing shape and keeping it going. Unfortunately there have been many close calls where that age has shown. On Thursday, under the lights with days ahead of Halloween, it’ll be a zombie apocalypse of sorts where Brady’s night will be overtaken by Raven defenders. The veteran quarterback will throw two interceptions, and quite possibly fumble while being sacked courtesy of former Buc Jason Pierre-Paul.”

Brady did not play well, probably his worst game of the season as he missed multiple open receivers and never seemed truly comfortable in the pocket. While Gil was right about Brady struggling, Brady also managed to avoid having any turnovers again in this one. He has not had a turnover since week four, but also only has a handful of touchdowns during that span as well.

“Mike Evans had probably the worst drop in his career last week that set the tone for the most disappointing loss of the last three years for the Bucs. He still led the team with nine receptions on fifteen targets for just under 100 yards. This week, Evans is going to make up for the blunder and catch every target thrown his way while getting in the end zone twice.”

Evans had a nice day and while he had a drop on a deep ball he still was productive. The drop on Thursday night was much different than the one against Carolina. It was a tough catch for Evans to make, but still one he has to grab. He did not catch every target, but he was targeted 11 times and racked up six catches for 123 yards, though he did not find the endzone in this one. Evans has been playing well, but is still looking to score touchdowns to help this struggling offense.

“The Bucs defense has had the reputation of having a strong run defense the past few seasons, however this year’s unit is much different… because it is much worse. Last week, Tampa Bay gave up almost 200 (!!) rushing yards to the Carolina Panthers (+1). With the Ravens in town, expect them to continue to punish the Bucs on the ground. The Ravens will rush for over 150 yards including two rushing touchdowns.”

I was semi right on this one as the Ravens ran all over the Bucs defense, specifically in the second half of the game. Baltimore ran for 231 yards but only reached the endzone on the ground once. The Bucs defense continues to get beat up on the ground and they offer little resistance. The run defense of the previous three seasons is completely a thing of the past and it is really hurting Todd Bowles’ unit thus far.

“Look, this has been a miserable month and nothing to seems to clearly indicate it’s going to get better. I know that, but remember this is Thursday Night Football — it’s a forum defined by terrible, nonsensical football. The Ravens kinda stink, too, especially when defending the pass. It’s how they’ve blown three fourth-quarter leads already. It may not be a full corner turn, but Tom Brady, Chris Godwin and Mike Evans will drag this team to victory with over 350 yards of passing offense and three touchdowns.”

Unfortunately for Mike and the Bucs, things did not go this way at all. Tampa Bay did end up having some success through the air, but it was not nearly enough. Yes the offense looked better than the previous two games, but that is a pretty low bar that was set. This offense looks lost and I am not sure if they can find their way soon enough to turn things around.

Will Walsh: Don’t be the fan who falls for it.

“Do yourself a favor and don’t believe the hype. The conversation leading up to the game will be all about how wonderful of a matchup this is, but if you’ve watched Tampa Bay this season then you know better. So don’t fall for it. The Bucs have played, mostly, despondent football in 2022 and they have shown us who they are. Even if the game is close initially, you know better, don’t fall for it. The game will be close enough to make you think about getting your hopes up, but victory will never actually be within Tampa Bay’s grasp. Don’t be the fan who falls for the feint uptick in effort Tampa will show early on. Baltimore, even in a disappointing year for the Ravens, is the better team. Official prediction, the Bucs will score less than 20 points in a third consecutive week, for the first time in the Tom Brady era.”

There was some hope that Tampa gave fans as the offense actually looked decent and even scored a first quarter touchdown. The defense also was playing with a lot of energy. Unfortunately, the Bucs offense could not keep their foot on the gas and it burned them. The defense was tired and Baltimore took advantage in the second half.

“The Buccaneer defense cannot stop the run, cannot pressure the quarterback with the front four, and doesn’t seem interested in hustling to the ball to try and force turnovers. The one player that has shown up week in and week out, Antoine Winfield Jr., will miss Thursday’s game with a concussion. Baltimore will control the line of scrimmage, time of possession, and Lamar Jackson will show his MVP form, accounting for 250 total yards and three touchdowns.”

Chris was close on this one as Jackson showed out. He ended up with 281 total yards and two touchdowns, both coming through the air. The Baltimore offense struggled in the first half, but they were able to make adjustments and the Bucs paid for it.

This is a brutal football team to watch right now and it is hard to see the light at the end of the tunnel anytime soon. This team has a ton of talent. Not many can argue that, but right now the coaching and execution are simply not good enough. Still a lot of football left to be played, but something needs to change and change quickly.