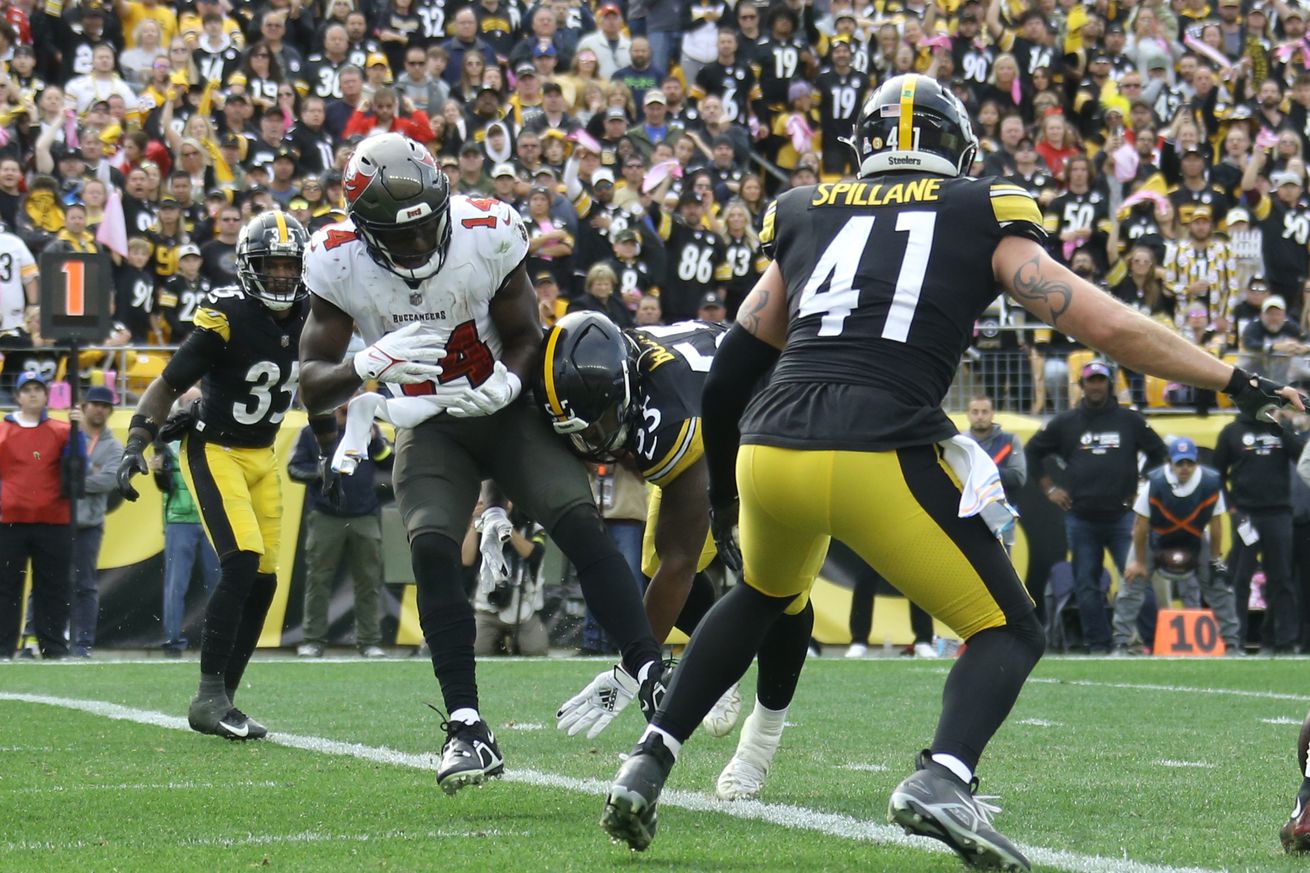 There’s no logical explanation for the Bucs’ 20-18 loss to the Pittsburgh Steelers, nor is there one for their 3-3 start to the season. There are a lot of factors playing into it and there don’t appear to be any answers in sight to get this team straightened out.

1.) The Red Zone Offense Is Unwatchable. The Bucs went 1-for-4 in the red zone on Sunday against the league’s 30th ranked passing defense. They had 1st-and-goal from the three yard line and still had to settle for a field goal. To make matters worse, Mike Evans didn’t even see a target in the red zone throughout the entire game. The team leader in receiving touchdowns, one of the best jump ball receivers and end zone threats in the NFL, and who had four catches on four targets couldn’t manage to get one look in the end zone. And that’s another thing – only four targets for Evans against, again, the 30th ranked pass defense in the league that was out four starters. The Bucs are 9-for-19 in red zone trips this season with four of those conversions coming against the Chiefs.

2.) Tom Brady Looked Bad. Tom Brady, for as great as he is, is not above criticism. When Brady missed eleven days in the middle of training camp, we brushed it off and said “he’s Brady. It’s not a big deal.” He misses practices each week and we brush it off and say, “he’s 45-years old. They need to keep him fresh. He’s Brady – it’s no big deal.” Then, this past week, he misses walkthroughs and team meetings to attend a wedding in New York for New England Patriots’ owner Robert Kraft. “Oh, it’s just one day. It’s Brady – it’s no big deal.” Well, with as bad as Brady looked on Sunday – and his lackluster performance throughout the season – maybe it’s all adding up to being a big deal and just being Brady isn’t enough anymore. He doesn’t look like the quarterback we’ve seen the last two seasons in Tampa. He doesn’t look as laid back or like someone who is enjoying what he’s doing. Does he regret unretiring? Are the off-field personal issues weighing heavily on the mind of the person that is always looked at as being the best at compartmentalizing and focusing on the task at hand? Something isn’t right.

3.) Offensive Line Is Just…Offensive. Rookie guard Luke Goedeke had his worst performance of the season and the downgrade along the offensive line is weighing heavy. Robert Hainsey has stepped in for Ryan Jensen admirably and Goedeke is going through his growing pains, but the downgrade from Jensen and Ali Marpet is not only noticeable but it’s hurting all facets of the offense. The line isn’t getting any push on run plays, Brady doesn’t have the time in the pocket he has the last few years. Everything for the Bucs starts up front and they just aren’t getting the job done right now. The problem is, if you pull Goedeke for a backup, it will effectively end his season. The physical aspect is one thing, but pulling Goedeke now ensures that he’ll have a mental hurdle to overcome if he’s called on again. We’ve seen multiple times over the years a rookie being completely derailed when he was pulled out then asked to go back in based simply on performance. It’s a lot to deal with, so the Bucs have to figure out how to succeed with the five they have up front.

4.) Defense Falters Down The Stretch. It was bad enough that the Bucs were losing to Kenny Pickett, but when Pickett unfortunately left with a concussion it was time for Mitch Trubisky to enter the game. Trubisky not only threw a touchdown pass to Chase Claypool but he managed to covert four consecutive third downs – three of which had distances of eleven, thirteen, and fifteen yards. It’s a distinct possibility that Carlton Davis was beat on some of those because of his lingering hip issue, but there’s really no good excuse for the Bucs to fail on third downs with ten-plus yards to go with the game on the line. Especially when the Bucs had held Pittsburgh on 3-for-11 on third downs prior to that. It was a complete collapse at the worst possible time.

5.) Who Are The Bucs? It seems like this team, right now, has absolutely no identity. No matter what they try to lean on, it fails. Are they a running team that has trouble running the ball? Are they a passing team with an offensive line that can’t protect their struggling quarterback? Are they a defensive team that can’t find a way off the field on third downs? We’re six games into the season and as soon as things appear to be improving, there’s a drastic leap backwards. This team should, at the very least be 4-2 but more like 5-1 at this stage. The Packers are in shambles and the Steelers had no business being in that game to begin with. Maybe Bowles was right and there’s a lot of guys in that locker room resting on their Super Bowl laurels.

6.) What If…? One of the biggest differences between this season and the previous two is who is roaming the sideline. Would this Bucs team be 3-3 if Bruce Arians was still the head coach? Byron Leftwich seems to have taken a giant steps back in terms of playcalling – though, some of that may be partially caused by the deficiencies along the offensive line – so one has to wonder if Arians had a bigger hand in offensive decisions than was initially believed. Maybe all those “red pen” comments were actually a good thing? As for Todd Bowles, he might have bitten off more than he can chew. One of my biggest concerns when it came to Bowles taking over was his desire to pull double duty. Bowles needs to focus on just being a head coach and relinquish the responsibilities of play calling and defensive game planning. He named co-defensive coordinators prior to the season yet he maintains control and the defense has taken as big of a step back as the offense has. The run defense the last two years were top-3, this year they’re bottom half of the league. Giving up four straight third down conversions is not indicative of a Todd Bowles defense. As some began to say on Twitter late in the game Sunday – No Biscuit, No Biscuit.

232 – Receiving yards by Leonard Fournette, second most in the NFL by a running back

3 – Sacks by Antoine Winfield Jr., most in the NFL by a defensive back this season

2 – Wins against the Steelers in Bucs franchise history

0 – Takeaways by the Bucs defense, first time they haven’t had at least one this season

Me, every time the offense comes on the field pic.twitter.com/WHZ7iOUIaX

Things will get worse, before they get better. But when they do….. just remember who put you down, and who helped you up……..

Sure sounds like he yells “you’re so much better than the way you’re f****** playing” https://t.co/Trrb8Qdl8g

Prayers up for Cam Brate

Per Usual, This List Was Compiled Ahead Of The Completion Of Sunday Night Football

2.) Philadelphia Eagles – Appear to be one of the few NFC teams with a clue

4.) Minnesota Vikings – Leading the way in the NFC North

5.) New York Teams – The Giants and Jets can’t actually be for real, can they? I mean, they just…can’t be

9.) Tampa Bay Bucs – All the talent is there, but no one is living up to it

Relieved Bucs: Wirfs’ injury not as bad as initially feared