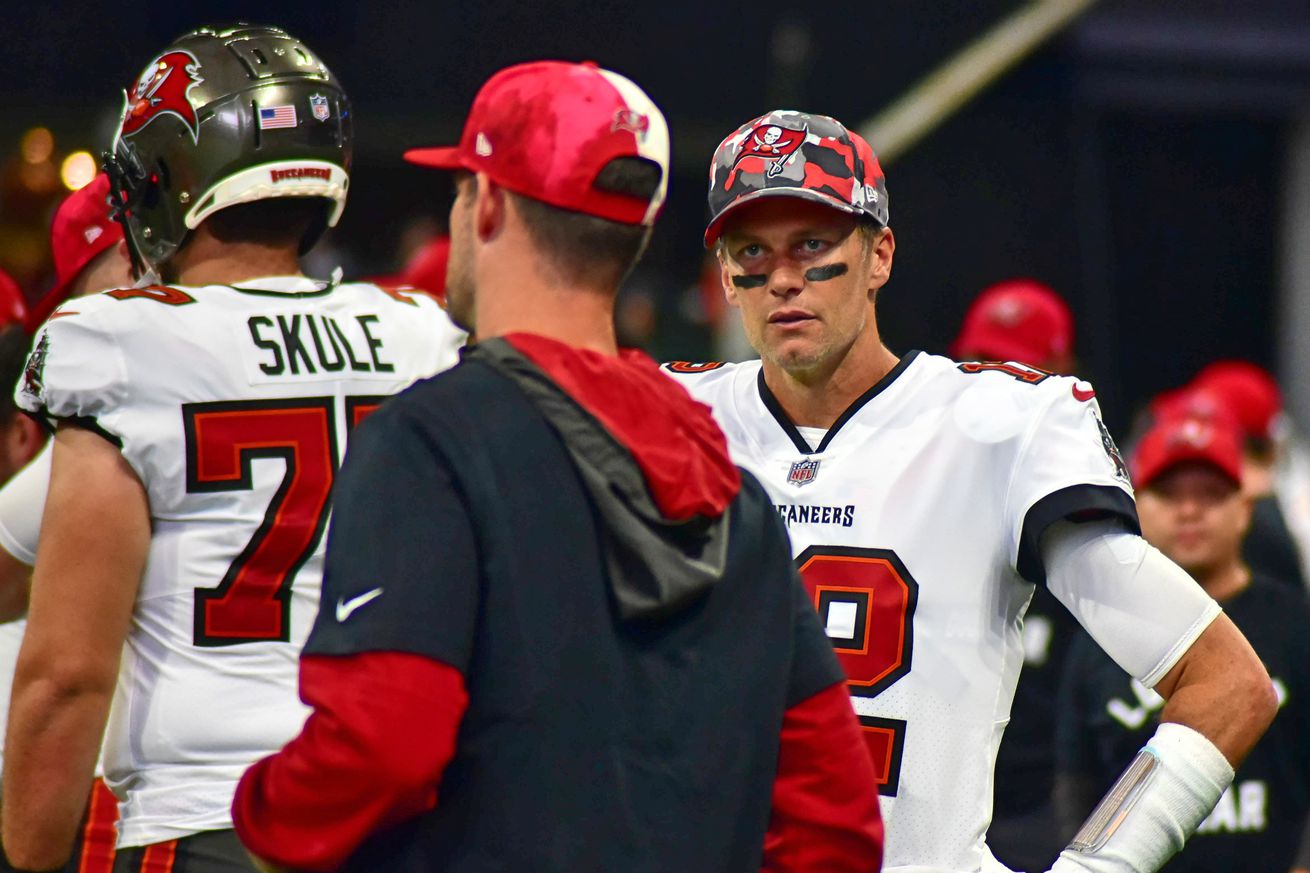 That was about as exciting and interesting as watching a preseason game. Brady played until shortly before halftime, Blaine Gabbert and Kyle Trask showed that they aren’t good quarterbacks, and Bucs fans better pray that Tampa Bay doesn’t have to put in any of the backups we saw in the second half against the Falcons.

Regardless, the Bucs are headed to the playoffs – albeit, at 8-9 – and they will host the Dallas Cowboys on Wild Card weekend.

1.) You Could Have Waited A Few More Plays, Todd. Yes, I fully understand that the Bucs needed to ensure they didn’t lose anybody crucial to an injury ahead of the playoffs. They already had Vita Vea, Julio Jones, Mike Evans, Donovan Smith, and Mike Edwards out. They lost Robert Hainsey to a hamstring injury on the first drive. However, Chris Godwin was a measly four catches away from setting a franchise record for receptions in a season. Just four. Brady stayed in a full drive longer than Godwin did and you mean to tell me that Godwin couldn’t get hyper-targeted on that drive to usurp Keyshawn Johnson in the Bucs record books? C’mon, Todd. It’s bad enough that Brady’s undefeated record against Atlanta came to a screeching halt with him standing helpless on the sideline, but at least there could have been a record set in the process.

2.) The Backups Are Simply Terrible. Good heavens, the reserves on defense that were sent into the game were absolutely atrocious. Atlanta had four straight scoring drives and their fifth possession of the second half ended the game. Zyon McCollum still struggled, there was constant confusion as to the assignments among the secondary, big plays and easy pitch-and-catch on third downs doomed this team. No, the offense certainly didn’t help, but this defense didn’t know which end was up. If any of those guys see meaningful snaps in the playoffs, the Bucs are in big trouble.

3.) A Window Into An Alternate Universe. Hey – you all remember that time that Tom Brady retired and Bruce Arians said they were going to roll with Blaine Gabbert as their starting quarterback? And you had people saying we should just see what Kyle Trask has and let him start? Remember that? Well, there was a glimpse of what that life would have been like for Bucs fans and it was reminiscent of the Josh McCown era. Holy moly, that was bad. Yes, Gabbert had a touchdown pass – on a play where Russell Gage got hurt and it ended his day – but he also started with the ball at the Atlanta 22. Gabbert and Trask combined to go 9-for-17 for 52 yards and a touchdown. Trask got the only second half first down and the offense could accomplish diddly squat. If Brady doesn’t return next season and one of these two is the starter, it’ll be full blown tank mode and hope to draft a quarterback in the top 5 of the 2024 NFL Draft.

4.) Hey Byron – More 83, Please. Deven Thompkins is a lighting bolt. Using him in the passing game, on end arounds, pitches – just getting the ball in his hands is an explosive play waiting to happen. Thompkins did a great job of making defenders miss, finding seams, and picking up positive yards. Utilizing his unique mixture of speed, quickness, and elusiveness could be what sparks the Bucs to a win next week. He’s virtually unknown by opposing defenses due to his lack of usage outside of the return game. Get him the ball early so the defense has to account for him, then trot him out on the field as a decoy at the very least. He could create really nice mismatches for the Bucs’ playmakers on Wild Card weekend.

5.) Preferable Matchup. Between the Cowboys and Eagles, the Bucs match up much better against the Cowboys. They already beat Dallas – in Dallas – 19-3 in week one this season. Yes, the Cowboys’ defense is scary good, but Brady’s quick release can help counter some of that. Not to mention, that’s one of the few teams the Bucs found a lot of success running the ball against – using their over-aggressive pass rush against them on delays and draws. Now, the Bucs look to be in line to get Ryan Jensen back which certainly buys Brady some extra time in the pocket to find his receivers down field. Evans, Godwin, Julio Jones should be ready to fire up while Carlton Davis will return to the field looking to pick up where he left off when he takes on CeeDee Lamb. The Bucs struggle a lot against mobile quarterbacks, so Jalen Hurts is not an ideal matchup. Just have to hope Brady doesn’t have undefeated records fall in back to back weeks.

6.) A New Season Begins. 8-9 doesn’t matter. Everything that has happened up to this point doesn’t matter. The crushing losses to Cincinnati, Pittsburgh, Cleveland, Carolina, Baltimore – none of it matters. At all. Every team is 0-0 and a new season officially kicks off on Saturday. With records going out the window, do you really think teams are licking their chops with the thought that Tom Brady and a Todd Bowles defense is coming to town? You think any team looks at the Bucs who won the worst division in the NFL and thinks they’ll be a pushover? Not a chance. It’s still Tom Brady. It’s still a roster and coaching staff made up mostly of players that won a Super Bowl two years ago – and those that didn’t came here to accomplish exactly that. And don’t, for one second, think that it wouldn’t be the most Tom Brady thing of all time to win the division with a losing record then rattle off four in a row to become the most improbable Super Bowl champions of all time. This is the reset button – and it’s time to get to work.

14 – Straight games with 5+ receptions for Godwin, still the longest active streak in the NFL

10,425 – Receiving yards by Mike Evans in his career, ninth most in NFL history through nine seasons

9 – Fumble recoveries by Devin White since 2019, most in the NFL over that span

4 – Times in franchise history teammates both went over 1,000 yards receiving. Evans and Godwin account for three of the four times (2014 – Evans and Vincent Jackson)

Gisele: “What do you have left to prove?”

Tom: “Win the Super Bowl after winning the division with a sub-.500 record” pic.twitter.com/8I8z4GKRq1

Brady: So Ryan, how does this whole watching from the sidelines thing work?

Griffin: Well, you just stand here and look out there at the game.

.@TomBrady is the first player in NFL history with 5 straight games of 30+ completions.

He also has 10 different 30+ completion games this season, also the most all-time.

He is 45-years old, still doing things no one has ever done before. pic.twitter.com/zinKedkSSd

What a scene in Buffalo. Incredible.pic.twitter.com/uWpAbsLVTI

1.) Buffalo Bills – Absolutely not betting against them this year

3.) Philadelphia Eagles – Insanely talented, but is Hurts ready to take them to the next level?

4.) Cincinnati Bengals – Got the short end of the stick by the NFL and playing with a chip on their shoulder

8.) Tampa Bay Bucs – Brady in the playoffs ensures they have a chance

Four Wins Away From Another Lombardi