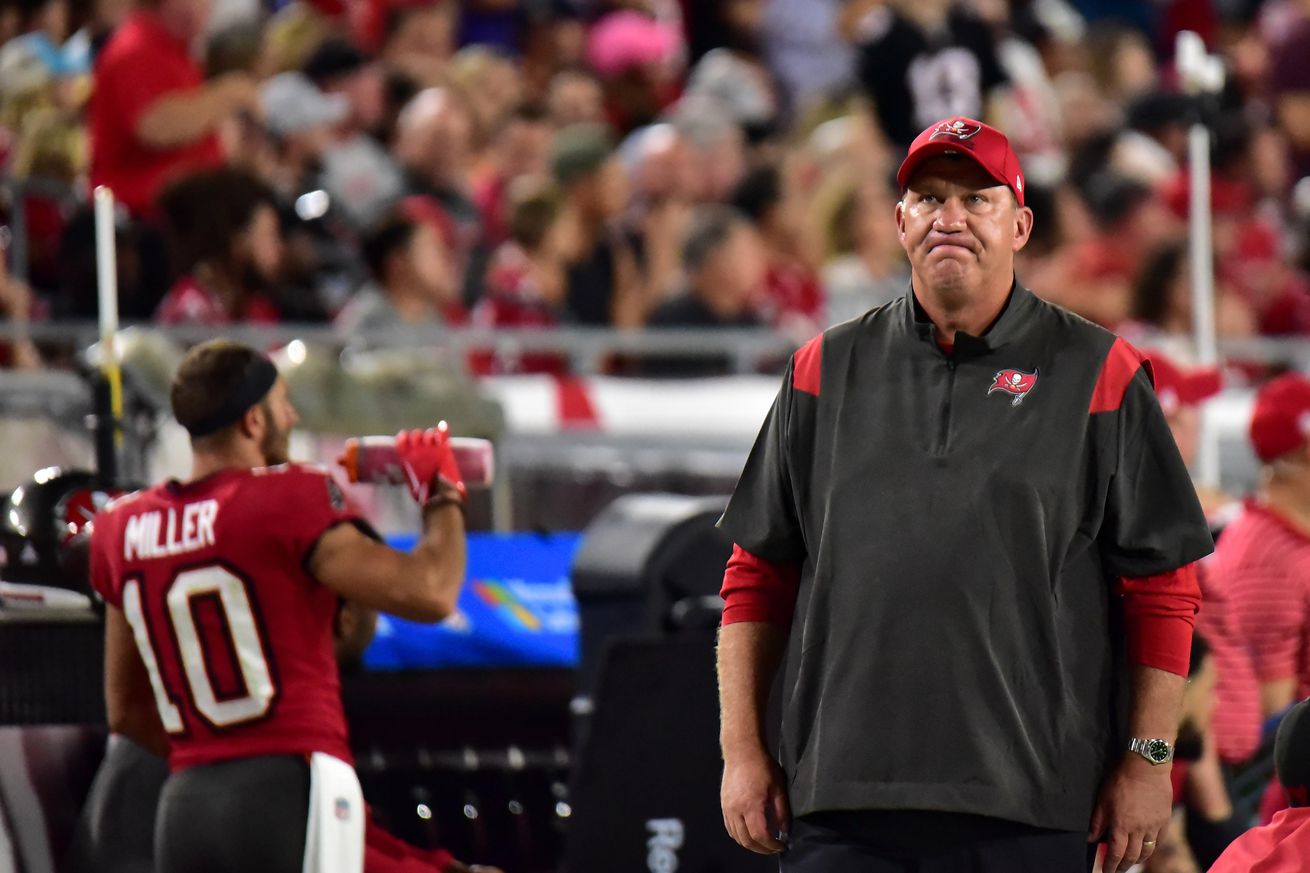 This is a five alarm, defcon-20, full blown disaster. In a season that started with Super Bowl aspirations is spiraling down the drain faster than Urban Meyer’s NFL coaching career. Tom Brady looks like a shell of his own self, Todd Bowles looks like he’s in over his head, the running game is completely inept, and the offensive line looks like a row of turnstiles.

1.) The Running Game Is Worthless. The Bucs are currently on pace to have the worst running game in the NFL in over twenty years. They are averaging 61.9 yards per game while Leonard Fournette is averaging 3.4 yards per carry on the season but during the Bucs’ three game losing streak he’s at 2.78 yards per carry. The offensive line is getting absolutely no push up front, Fournette is hesitant to hit what little light he sees in front of him, leading to rushes for no gain or a loss. It’s at this point that Rachaad White should start to get a huge bump in opportunities – akin to the timeshare between Fournette and Ronald Jones back in 2020. While White is only averaging 3.0 yards per carry on the season, he’s averaging almost 4.5 yards per carry over the last two games. He looks more explosive, more decisive, and the Bucs don’t lose anything in terms of pass catching – or blitz pickups – when he’s on the field. Something needs to spark this run game and maybe a change at the lead back will light a fire under them.

2.) When It Rains, It Pours. As if losing most of their secondary wasn’t bad enough, the Bucs have lost Shaquil Barrett for the season with a torn achilles. With the season in jeopardy, the Bucs could try and pull off a trade to get someone else in to replace Barrett – like Denver’s Bradley Chubb – but it’s more likely that they roll with Anthony Nelson and Carl Nassib to fill in and hope for the best. Either way, the loss of Barrett is devastating to an already reeling defense that hasn’t been able to stand up in the later parts of the second half over the last three weeks.

3.) Tom Brady Isn’t Having Any Fun. Call it reading body language, call it looking into on-field or sideline reactions, or look no further than what Rick Stroud said about Brady following the loss to the Ravens – “Brady was inconsolable following the Bucs’ 27-22 loss to the Baltimore Ravens Thursday night. He sat fully dressed in his uniform facing his locker for at least 15 minutes with his head in his hands.” – but this isn’t what Brady thought he was coming back to. Not what he expected from a team that is two years removed from a Super Bowl and a year removed from the most wins in a single season in franchise history. Maybe the finality of Brady’s personal issues will help him on the field, maybe facing one of the worst losing streaks of his career will set him on a track for a vintage Brady bounce back – or maybe he regrets coming out of retirement and the spiral continues to the most disappointing and underachieving seasons in the history of the Bucs.

4.) Devin White Is Not Playing To The Level He Should. For all the flash and excitement that White brings to the field, his play is not up to the standard that I believe even he holds himself to. Missed tackles, blown coverages, and celebrating a tackle he made on a running Lamar Jackson that resulted in a first down. To be the guy that said he wanted to be the first $100-million linebacker, he isn’t playing anywhere close to where he needs to. And we know what White is capable of – we saw it in the playoff run that resulted in a championship. We know he can do it, it’s a matter of seeing him put that together consistently. He wears the “C” patch on his chest for a reason and it’s because his teammates believe he can do it. The talent is there – that’s never been a question – but he has to step up and lead by example and that example can’t include the kinds of mistakes he’s making.

5.) The Snowball Effect Of Losing Gronk. Rob Gronkowski’s retirement has effected the Bucs in more ways than one. For starters, his personality in the locker room would be something the Bucs could use in this down time to pick up the spirits of what has to be a depressed group of guys right now. Second, the security blanket for Brady on the field. When things are going wrong on the field, Gronk is always there as a reliable outlet to move the ball and keep a drive going. Finally, his blocking. Gronk could help mask a lot of the issues the line is having right now. Don’t get me wrong, I love what I’ve seen out of Cade Otton so far – but he’s no Gronk. He could be a top-tier tight end in the league, but he’s still a rookie and doesn’t have the rapport with Brady that Gronk did. Gronk alone doesn’t walk in the door and fix all the problems, but he certainly would have masked some deficiencies this season.

6.) It’s Not Over. As bleak as things are, the NFC South is a dumpster fire and the Bucs could easily win the division with an 8-9 record and all you need to do is make the tournament – anything can happen from there. The Bucs have a stretch of very winnable games if the offense can just start to look like they understand what they’re doing. With the defense struggling as much as they have, they’re still allowing less than 20-points per game and that is something the offense has to figure out how to capitalize on. There’s no reason this offense can’t score over 20 a game if they just get out of their own way.

302 – Consecutive starts by Brady without a three game losing streak

57 – Passes defensed by Lavonte David since 2012, fourth most in the NFL over that span

19 – Field goals by Ryan Succop this season, most in the NFL

Joe Tryon-Shoyinka was held about 30 times, but the official knows he ain’t getting a Lamar Jackson autograph if he throws that flag.

My god. Fitz is here. DeSean Jackson is here. The best postgame look ever … is back. pic.twitter.com/wOzlkih7S4

Per Usual, This Is Compiled Before The Conclusion Of Sunday Night Football

1.) Buffalo Bills – Still the best team in the NFL and might finally get over the hump

2.) Philadelphia Eagles – Coaching makes a huge difference – and so does A.J. Brown

3.) Kansas City Chiefs – Always a threat and just added another playmaker on offense

4.) Minnesota Vikings – Again, the only thing that can get in their way is Kirk Cousins Cousining

5.) Miami Dolphins – Tua is back and so is a dangerously explosive offense

16.) Tampa Bay Bucs – Winnable stretch coming up if they can get their act together

Win This Week Or Season’s Over