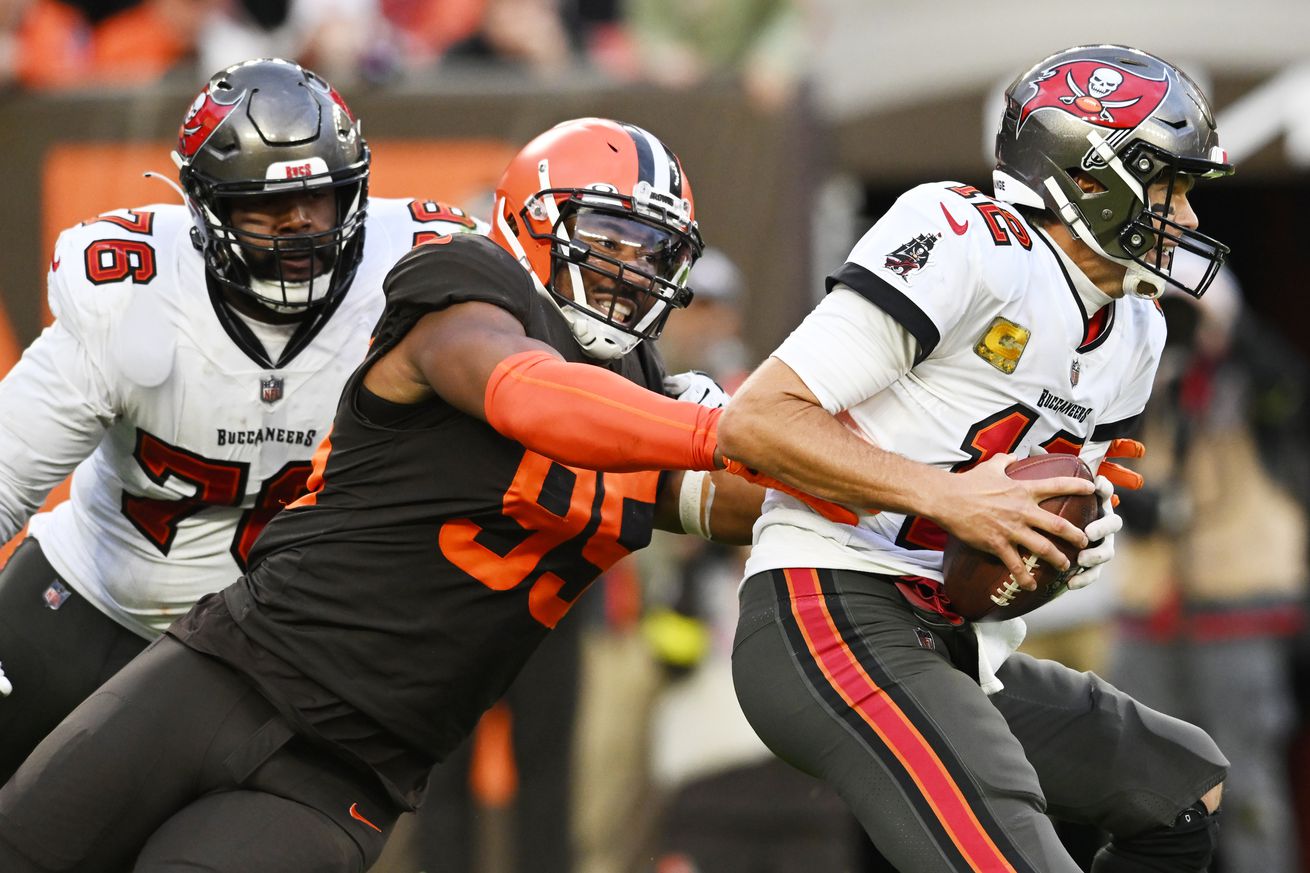 Bucs fall to 5-6 after brutal overtime loss in Cleveland

There’s no other way to put it – that was painful. A team that had a lead with just over two minutes left let that lead slip away. Then they had a chance to win and their coach gave up. Then in overtime they lose their best offensive lineman and the game.

1.) Todd Bowles Was Terrible Down The Stretch. Some of the worst clock management I have ever witnessed, Todd Bowles just gave up. With the greatest quarterback in history with more game-winning 4th-quarter drives than any other quarterback ever, with three timeouts in his pocket, with an arsenal of weapons that just needed to get the the 35 yard line – he gave up. The Bucs had 32-seconds left and on the first play, Brady was forced to check down to Rachaad White for a one yard gain. Instead of stopping the clock, Bowles let fifteen seconds run off before the next play – where Tom Brady hit Julio Jones for 26 yards to the Browns’ 48-yard line. At that point, there was eight seconds left. The Bucs needed thirteen yards and Bowles cost them at least two plays because, as he told the media after the game, “That clock was going to run down. It was overtime, right off the top.” Um, what? That’s not the attitude or the belief you need to have in your head coach. With the day Chris Godwin had, you mean to tell me that with two more plays, he can’t get you thirteen more yards? Absolutely inexcusable and a loser mentality.

2.) Tristan Wirfs. Had the game not gone to overtime, the Bucs would still have their All-Pro right tackle. Instead, Wirfs was carted off in overtime after a Browns defender landed on his leg. Now, there is some good news – X-Rays on Wirfs were negative and he was moving around in the locker room after the game with a boot on. He’ll likely undergo more testing and I would guess he would miss at least next week, but it isn’t as dire as what was believed when it happened. If Wirfs is gone for the season, the Bucs stand no chance. With Wirfs on the field, the Bucs still have one of their most vital players and can win some games.

3.) Where Is The Disconnect? Mike Evans had nine targets on Sunday but only managed two receptions for 31 yards. Brady looked for him multiple times deep down field but the two just seemed out of sync. Brady told us after the game that everyone needs to play better and he needs to make better throws, but the opportunities were there. Brady had no issues connecting with Godwin or Jones, but he and Evans just couldn’t seem to click. If the Bucs are going to win games, that’s a connection that has to be there.

4.) Third-And-Awful. The Bucs were 4-of-15 (26.7%) on third downs against the Browns. You aren’t going to win games if you can’t convert third downs. Two of those four conversions were in the opening scoring drive. They didn’t convert another one until the third down play that resulted in Ko Kieft’s touchdown catch in the third quarter. Their final one came in the opening drive of overtime. This isn’t sustainable if the Bucs are going to have any chance at all to come out of this tailspin.

5.) APB Out On Cade Otton. How is it, when Cameron Brate was out, Cade Otton got tons of use in this offense but the moment Brate returns Otton is nowhere to be found? Brate is a good player, but his receiving talents are not on the same level as Otton. Otton had zero targets on Sunday. None. Zip. Zilch. Nada. Even Kieft had a target and he’s the blocking tight end. The offense is better when Otton is involved and I don’t know how many incompletions or drops on passes intended for Brate there needs to be for Byron Leftwich to wake up and realize the weapon he has standing around on the sideline. The guy was the Bucs’ leading receiver just a few weeks ago. Now, he’s not even on the stat sheet. For a team averaging about 18 points a game, you’d think they’d want every available weapon at their disposal.

6.) Credit Where Credit Is Due. A lot of people – myself included – criticize Devin White’s ability in coverage. He blamed himself and said he wished he had the play back that tied the game with under a minute left – but that wasn’t on White. It was an incredible, acrobatic catch by David Njoku that will be on highlight reels for years to come. Tip your cap to Njoku, he made a heck of a play. It’s frustrating the Bucs were in that situation to begin with after they held Chubb in check most of the day before his 34-yards in two plays put Cleveland in a position to score. But that catch was just one of those things where it didn’t matter who was in coverage – it was a great play by Njoku.

13,000 – Brady’s passing yards as a Buccaneer, fourth most in franchise history

20.5 – Sacks by Devin White since 2019, most in the NFL over that span for an inside linebacker

298 – Yards needed for Mike Evans to reach 1,000 yards for the ninth straight season

160 – Games played by Lavonte David, sixth most in franchise history

36 – Sacks by the Bucs this season, third most in the NFL

A damn SKUNK in the stands at the Browns game and everyone is just standing there taking pictures and videos and not moving away pic.twitter.com/njtL3GugZN

Been shaking my fist at my TV for an hour, is this what Bucs fandom is like https://t.co/psN4VQMuWk

The Bucs blew this game in Cleveland, after their Bye Week, pitiful.

This one’s on Bowles AND Leftwich. Hideous coaching job by both.

1.) Kansas City Chiefs – Big test against the Bengals this week

2.) Philadelphia Eagles – Right back to being dominant

4.) Dallas Cowboys – That defense is something else

5.) Minnesota Vikings – Only thing standing in their way is the ups and downs of Kirk Cousins

15.) Tampa Bay Bucs – They have too much talent to be where they are. Figure it out!

Window To Win Is Slamming Shut

For more on this and all things Tampa Bay Bucs, check out James Yarcho and David Harrison on the Locked On Bucs Podcast!