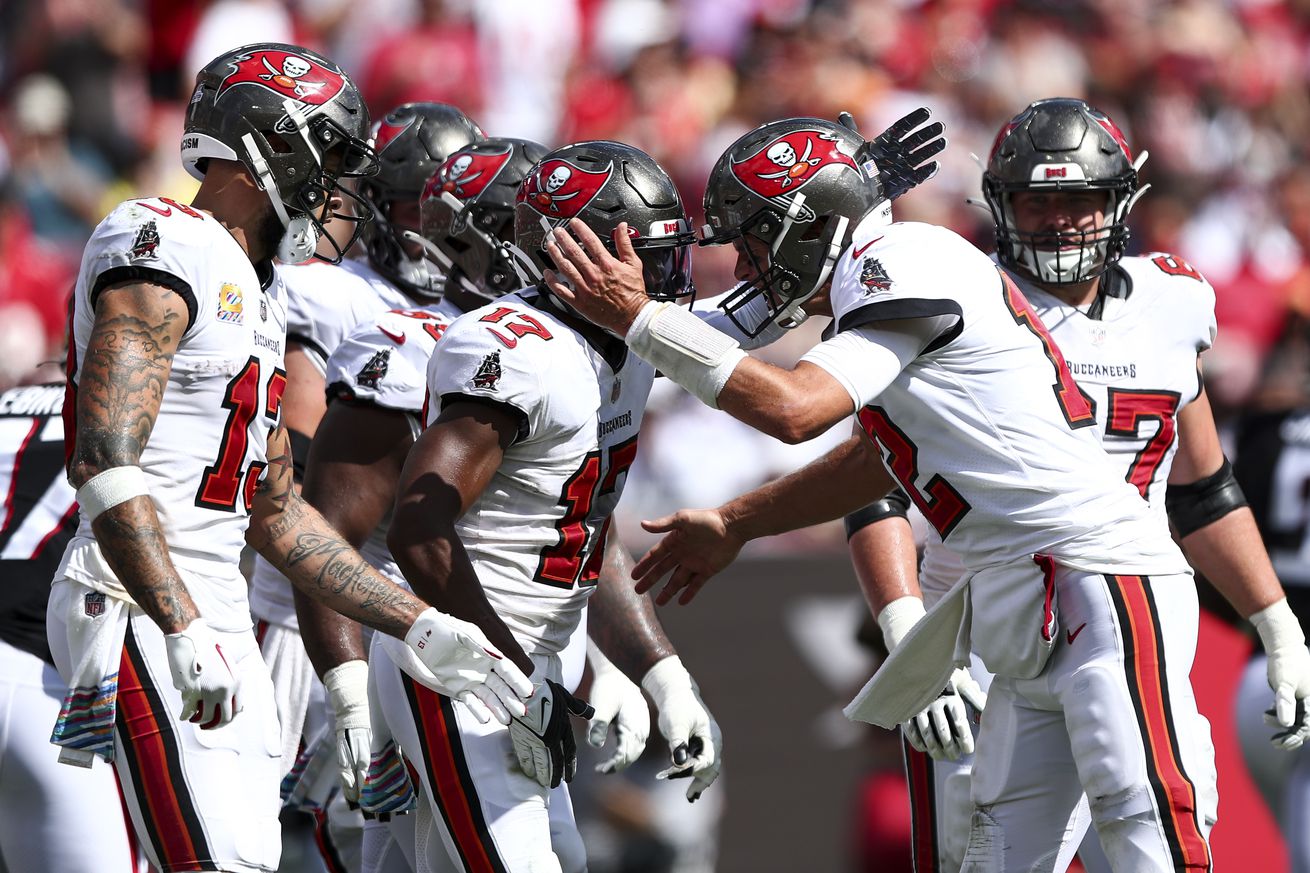 Well, that’s one way to snap a losing streak. The Tampa Bay Bucs are back in the win column and back in sole possession of first place in the NFC South but the big story is the late roughing the passer call on Falcons defensive tackle Grady Jarrett on third-and-five, giving the Bucs a fresh set of downs with under three minutes left.

Let’s talk about it and Pick Six.

1.) That Was A Bad Call. No matter how you look at it, the call against Jarrett was a terrible one. There wasn’t an egregious throwing or slamming of Tom Brady on that play. It was a textbook tackle and no flag was warranted. Instead, it very well cost the Falcons an opportunity to tie or win the game. However, I’m going to take it one step further. The play before, Tom Brady targeted Scotty Miller on a deep pass where there was clear defensive pass interference. The defender collided with Miller before the ball got there and didn’t turn his head around to look for the ball. Just like Jarrett had a textbook tackle, that was textbook pass interference. So, the Bucs should have had first-and-ten from the Atlanta 13-yard line. Instead, it was third-and-five and the rest, as they say, is history. I’m not preaching that two wrongs make a right or that the referees called roughing as a “make up call,” but had the right call been made the play before, this controversy never happens.

2.) Baby Gronk. The big story – to me, anyway – before that penalty on Jarrett was the play of rookie tight end Cade Otton who was absolutely fantastic. With Cameron Brate out with a concussion, it was Otton that got the majority of tight end one reps and he made the most of them. Six catches on seven targets, two of those catches going for first downs, and Otton asserted himself as a legitimate offensive threat. If the Bucs can continue that kind of play from Otton, it opens up the offense for the other playmakers. In the first four weeks of the season, defenses haven’t had to respect the Bucs’ tight ends because Tampa Bay hadn’t given them a reason to. Now, they have. There’s obviously some trust developing for Otton by Brady and that can only result in good things for the offense overall. Obviously, everyone wants Brate to recover and return quickly, but Otton needs to be the top tight end on this team moving forward.

3.) Don’t Panic About The Defense. I’m not even going to blame the defense for those two touchdowns the Falcons scored in the fourth quarter. They were gassed. The Bucs’ offense had three consecutive three-and-outs, causing the defense to get back on the field just as soon as they left it. Those three-and-outs barely took three total minutes off the clock. The three defensive drives following Bucs scores were as follows; eight plays – punt, six plays – missed field goal, four plays – punt (the fourth Bucs scoring drive came at the end of the half, therefore it doesn’t qualify here.) The offense didn’t hold up their end of the deal after dominating for three quarters and the defense were the ones that suffered for it. While most of this game was controlled by the Bucs on both sides of the ball, the complimentary football ended when the third quarter did. The Bucs have yet to put a complete game together from both sides of the ball at the same time.

4.) Injury Concerns. Carlton Davis, Sean Murphy-Bunting, and Mike Edwards all left in the second half with injury. Davis aggravated the hip injury he suffered in last week’s loss to the Chiefs while Murphy-Bunting suffered a quad injury and will undergo tests Monday to determine the severity. Head coach Todd Bowles said Mike Edwards is okay, which is certainly good news, but the secondary appears to be thinning as fast as the wide receivers did. Keep an eye on this throughout the week and don’t be surprised if Davis gets a day or two off from practice so that he can rest ahead of next Sunday.

5.) Repeat Rachaad. For a second straight week, rookie running back Rachaad White was a bigger part of the gameplan and he capitalized on it. White finished with five carries for fourteen yards while adding three receptions for 28 yards. He’s getting better by the week and is on the verge of having a big breakout game. One thing is certain – he should be giving Bucs fans some confidence that the Bucs have a guy to rotate in with Leonard Fournette that can get the job done in all phases; rushing, receiving, and picking up the blitz.

6.) Let Julio Sit. Look, the weekly “will he/won’t he” Julio stuff needs to stop. Just let him sit and rest. The Bucs don’t necessarily need him right now – especially if Otton continues to get the kind of usage we saw against the Falcons. With Julio, it’s far more important that he’s ready to roll in January, not October or November. In fact, the Bucs should probably put him on injured reserve and just let him heal up as much as possible before the playoff push. Chris Godwin looks to be getting closer and closer to 100% and Russell Gage has already shown flashes of being a big contributor to the offense when targeted. A healthy Julio in January is a much better idea than Julio trying to play through injury and re-aggravating his knee and being forced to the sideline.

256 – Brady’s first half passing yards, most in a half in his career without throwing a touchdown pass

139 – Fournette’s total yards, matching the most he has in a Bucs uniform in a single game

19 – Sacks by the Bucs defense this season

51 – Passes defensed by Carlton Davis, tied for the most in the NFL since 2019

Mike Evans inside the 5, rolling through the Falcons secondary pic.twitter.com/QjsBGv3OYX

That roughing the passer on the Tom Brady sack was awful. No denying that. But the refs also missed a BLATANT defensive pass interference on the play before. So it evens out. pic.twitter.com/rso2WabdIL

I’m gonna have to duck after I tweet this: That roughing the passer penalty against Atlanta shouldn’t have been called — but it also never should have happened. On the play right before, the refs failed to flag a blatant PI on a deep pass to Scotty Miller that would’ve ended it.

The numbers are all out there, clearly displaying that Brady gets less roughing the passer calls, by percentage and total calls, than peer QBs.

Solely a matter of people wanting to evade facts for easy narrative.

Also, the roughing call on Jarrett was among worst of all time. https://t.co/Y5TWC1IndP

Six Things To Do In Preparation For A Trip To Pittsburgh

1.) Use literally any ketchup brand out there except Heinz

2.) Consistently reference in any and all conversations with Pittsburgh natives how overrated Sidney Crosby is and how the Penguins would be better if they drafted Alexander Ovechkin instead

3.) For those traveling to Pittsburgh for the game, be sure to walk around and very loudly proclaim how much better Philadelphia is than Pittsburgh – whether you believe it or not. Their faces will turn as red as the Bucs’ jerseys.

4.) Remind Steelers fans as often as possible how great Tom Brady is. There may not be an athlete that city hates more.

5.) Walk the streets using a terrible towel as a handkerchief. Someone’s head might spontaneously combust.

6.) Bond with Steelers fans over a mutual hatred of Antonio Brown while being a good sport and letting them know the above things were done in fun and not to be taken too seriously.

It should be noted, this list is done prior to the Sunday Night game being completed

3.) Philadelphia Eagles – I hate that they’re for real

4.) Tampa Bay Bucs – I don’t care about the Cowboys or Giants, the Bucs beat one and would beat the other – and haven’t even come close to playing their best game so far

6.) Minnesota Vikings – Almost blew it, but came back and won another divisional matchup