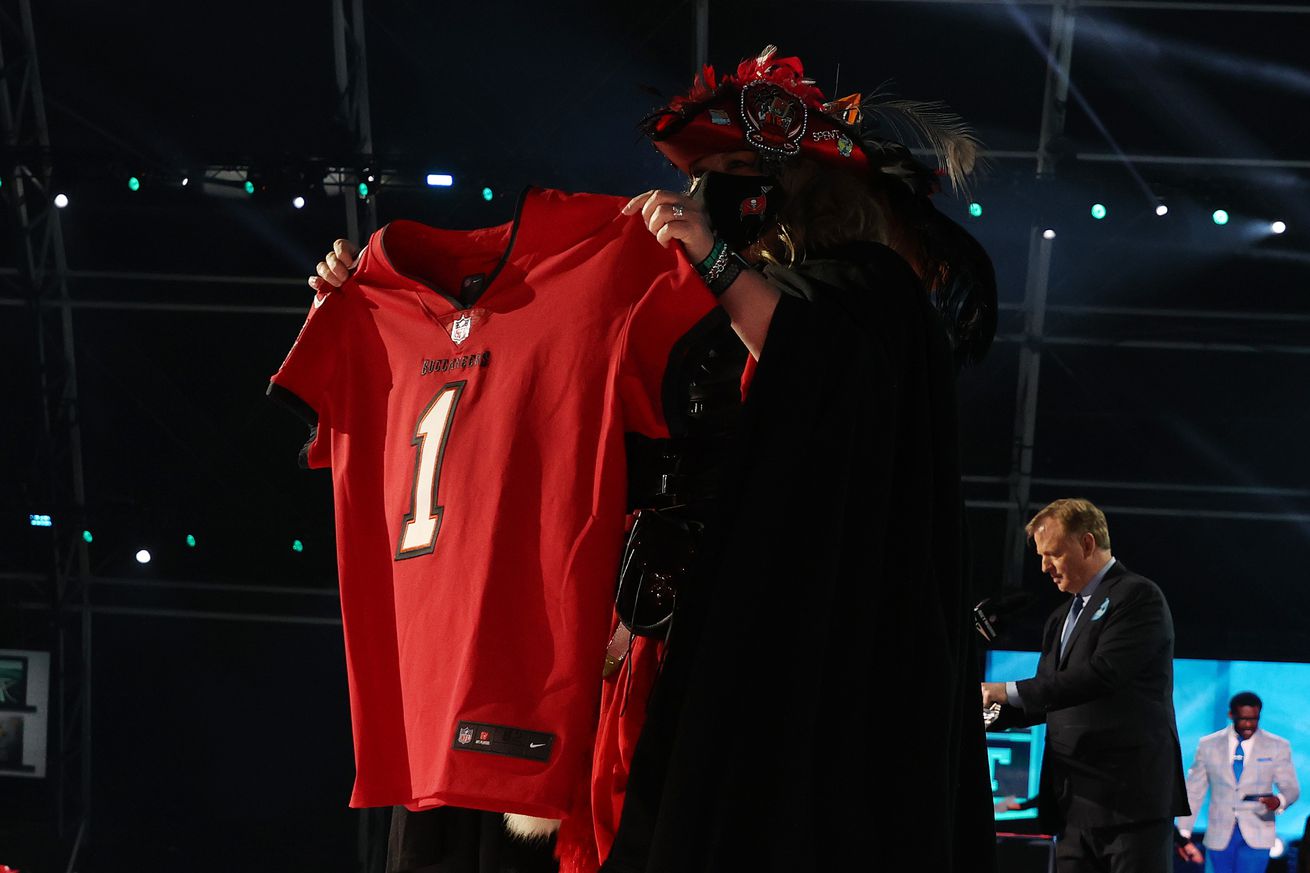 We go through some potential draft options for the Bucs.

Well, circumstances have certainly shifted for the Bucs since one year ago.

Rewind 365 days or so, and they were coming off their Super Bowl victory and poised to retain all of their starters from the championship squad. Repeat hopes rocketed, and we all felt as good as TB12 after a kale cleanse.

After falling to the eventual Super Bowl-winning Rams in the Divisional Round, the Bucs have regressed into reload mode following Tom Brady’s retirement and the likely loss of several other key contributors. This roster still has plenty of talent and some fiscal flexibility to do a little tinkering, but nailing this upcoming draft will be critical for getting the team back on the fastest track possible to competitive relevance.

A lot of clarity comes after the Scouting Combine. We get more intel on how teams feel about certain prospects, free agents, and other potential targets. It’s about the time where we can kinda, sorta feel alright about having some fun with mock drafts!

We took the temperature on positional needs for Tampa earlier this week, so let’s put that into practice with a good ole 7-round simulation.

When Ali Marpet decided to call it quits after an incredibly successful career that spanned seven years, it dealt another massive blow to an interior offensive line that already found itself in a perilous situation.

With the threat of also losing Ryan Jensen and Alex Cappa looming large, it pretty much guarantees that the Bucs will need to make a big investment at guard – either through free agency or the draft. It seems the most likely situation involves using a premium pick at guard and re-signing Cappa.

Boston College’s Zion Johnson may be the best guard prospect in the class after a strong Senior Bowl and Combine, and he may have guaranteed a higher draft spot than No. 27. That said, it’s always tough to gauge interest in interior lineman, since teams tend to devalue them in Round 1 in favor of other positions.

The Steelers desperately need a guard, but they might opt for someone like Kenyon Green, another very good prospect who can absolutely wreck house in the run game.

For now, we’ll stick with Johnson, who people have favorably compared to Marpet himself. Johnson’s vice grip hands, long wingspan, and unbreachable anchor result in a proper running mate for Donovan Smith on the left side of the line.

Absolutely. I think @BrandonThornNFL was right in saying he has a lot of similarities to Ali Marpet. Both have insane grip strength and rarely get bull rushed

The Bucs made the right decision to ensure Chris Godwin remains in Tampa for the 2022 season by franchise tagging him for the second offseason in a row. Even with him back on board, the team very much needs reinforcements in the receiving room. Godwin is still recovering from an ACL tear, and this offense demands at least three reliable wideouts.

South Alabama is not a prospect factory, but they’ve mined an unheralded gem in Tolbert. He earned 2021 Sun Belt Conference Player of the Year and first-team all-league after setting school records with 82 receptions and eight touchdowns in 12 starts. He also ranked sixth in the FBS with 1,474 receiving yards (18.0 per rec.)

He’s hailed as a competitive, versatile athlete who understands and executes routes, puts in the effort to block, and shows the ability to make moves in the open field. Smaller school prospects have never scared away the Bucs before, and they certainly shouldn’t hesitate with Tolbert either.

South Alabama WR Jalen Tolbert is a Senior Bowl WR the #Bucs will definitely have an eye on.

Lot of contact on both sides here, but the physicality and acceleration after the catch for a big guy is pic.twitter.com/CJrXvMwt0z

By turning their nose up at franchise tagging Carlton Davis, the Bucs are acknowledging that their best cornerback might be worth more to some other team. Davis will likely command top dollar, and his departure would leave a massive gap at outside corner.

GM Jason Licht has clearly established a type at cornerback over the years – Long, tall, physical. Martin Emerson checks all of those boxes, as he can play some press but also handle zone coverage with fluid movement and swift recognition/pursuit skills.

He’s got long speed concerns after running a 4.53 in the 40-yard dash at the Combine, which will turn off some teams. It shouldn’t repel the Bucs, who don’t tend to worry about that issue as much. He also needs to get his handsiness and technique slips cleaned up, which will likely lead to him taking his lumps early on.

Tampa cannot go without selecting a defensive tackle if they fail to bring in a younger free agent. They’re simply too old in the trenches right now, and Vita Vea could use a long-term partner.

Bruce Arians hinted at the team being more interested in a different kind of lineman than what we’ve been used to with the likes of Ndamukong Suh and William Gholston, who profile more as run stuffers and straight-forward rushers rather than agile, finesse-type guys.

““For us right now, it’s quickness,” Arians said in regards to what Bucs require up front. “We’ve got strength – we’ve got plenty of strength. We need some quickness in the interior pass rush.”

A guy who I stumbled upon a couple weeks ago that immediately piqued my interest is Eyioma Uwazurike from Iowa State. He played several positions across the defensive line in odd and even fronts, which will certainly appeal to Todd Bowles. He’s a long, active athlete for defensive tackle and it shows up on tape. He confirmed this with some strong testing at the Combine.

His tall frame will lead to struggles with leverage early on, and he lacks the twitch you’d like to see out of a high-quality starter, but he profiles as a nice rotational player who could work himself into a starter role with continued refinement of pass rushing moves and technique.

This time last year, I pounded the table for both eligible UNC running backs – Javonte Williams and Michael Carter. The Bucs, shockingly, did not listen to a random 27-year-old with 62 Twitter followers.

The running back room still faces major turnover with the potential losses of Leonard Fournette, Ronald Jones and Giovanni Bernard, and only Ke’Shawn Vaughn under contract. Vaughn showed some improved feel for the game in 2021, but here’s the honest truth: he stinks in the pass game.

Brady leaving might change the approach, but the coaching staff has seemed pretty adamant about having a running back who can be relied upon for catching the ball and helping out in pass protection. Well, look no further than Ty Chandler.

Chandler got his chance to shine after transferring from Tennessee and seized the opportunity. He tallied 1,092 rushing yards and 13 touchdowns (182 carries, 6.0 per) and grabbed 15 receptions for 216 yards (14.4) and a score in 13 starts. He also has experience as a kick returner, which the Bucs perpetually need.

He’s patient, quick, and shifty with the ball in hands. This would be a slam dunk pick in the fifth round.

Re-signing Jordan Whitehead should be a high priority, but if that falls through it doesn’t hurt to explore fliers on potential replacements.

So why not pick a player who is compared most favorably to Whitehead? McKinley’s suboptimal athletic profile is going to bump him down boards, but he’s clearly an alpha personality with the smarts and history of production to at least get a shot.

Tampa’s coaching staff has fostered a good reputation for developing safeties between Whitehead, Mike Edwards, and Antoine Winfield. McKinley would be going to a best-case scenario to learn while contributing on special teams.

Well, there you have it, our first crack at a 2022 mock draft! We’ll get an even better chance to guess in a month or so, when the brunt of free agency is resolved and we’re only a couple weeks away from the big weekend.

But for now, would you all be satisfied with this result? Let us know in the poll/comments below!