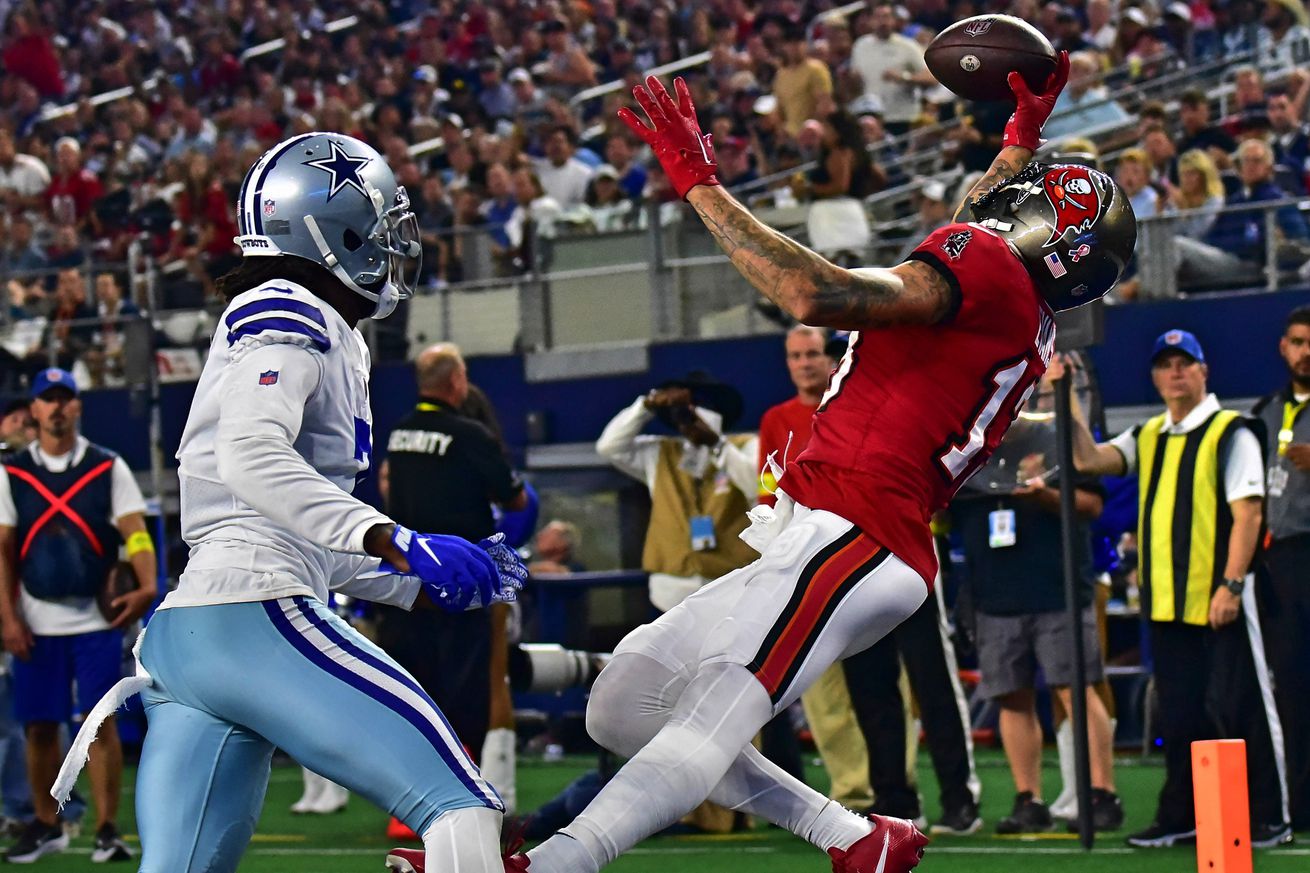 For the second time in consecutive years the Tampa Bay Bucs started their season against the Dallas Cowboys in primetime.

Coming into week one most betting sites had Tampa as the favorites on the road in AT&T Stadium. The opening Sunday Night Football game of 2022 was billed as a clash of big names with stars on helmets and stars on the field. Tom Brady was facing Micah Parsons and Mike Evans would be matched up with Trevon Diggs, exciting battles, not to be out done by Dak Prescott squaring off with Devin White. Throw in Julio Jones, Zeke Elliot, with CeeDee Lamb and NBC’s broadcasting a who’s who of NFL celebrities.

Mike Evans – No surprise here. Mike Evans is the franchise’s all time leader in touchdowns and he’s off to a good start in his 2022 campaign. In a game where the Bucs red zone offense was abysmal, Tampa can always count on Mike Evans. Number thirteen came through for another key six to extend the Bucs lead from nine to sixteen.

Julio Jones – Reports out of Bucs training camp have proclaimed Jones to be back to the old Julio Jones rather than looking like an old Julio Jones. The reports might be more than rumors at this point as Jones’ first performance as a Buc was a nice outing. Jones looked explosive, he had 69 yards receiving and even contributed in the run game with another seventeen yards rushing.

The Bucs red zone offense – The Bucs and their fans have extremely high expectations for their team this year. None of those goals can be accomplished without touchdowns. The Bucs were only able to score a singular touchdown, settling for five short Ryan Succop field goal attempts.

Who we thought would struggle and did:

The Dallas Cowboys offensive line – Tampa Bay boasts a very stout defensive front. Against the run they are as dominant as any in the league. In the passing game, they have interior and exterior rushers that can affect the pocket. Tampa’s pass rush netted four sacks and consistent pressure on Dak Prescott while the talented Dallas Cowboys run game only managed a meager seventy one yards rushing.

Who we thought would struggle and didn’t:

The starting Bucs offensive line – The Bucs starting unit up front has been sabotaged by injuries for weeks and the starting five didn’t make it through the first half. While the starting five were all in the game, the Bucs were able to run the ball with a high level of effectiveness and held up fairly well in pass protection. The same may not be said for the unit post Donovan Smith’s injury.

Surprise player of the game:

Joe Tryon-Shoyinka – Tryon-Shoyinka is slated to have a big role in his second season as a Buc. The team chose not to re-sign Jason Pierre-Paul who had been the starting defensive end/outside linebacker since arriving with the team in 2018. The Bucs are banking on their 2021 first round pick to show up and prove his worth as a starter. Tryon-Shoyinka had flashed as a rookie in spurts and this year takes on a more significant role. The second year player finished with only one tackle but he spent a good deal of the first half in the Dallas Cowboys backfield.

Leonard Fournette – Despite offseason rumors swirling about the highly publicized weight gain of ‘Lombardi Lenny’, Leonard Fournette remains a primetime player who the Bucs can rely on in big games. Fournette ran hard against the Cowboys totaling 127 yards but the play that might be the most eye-popping for Bucs fans was not a run or catch, rather a block. Late in the first half Bucs’ left tackle Donovan Smith left the game with an injury. The departure quickly led to Micah Parsons disrupting the entire Bucs’ offense. Enter Leonard Fournette.

Donovan Smith (Elbow): Did not return

Chris Godwin (Leg): Did not return

Leonard Fournette (N/A): Did not return

Starting a season off on Sunday Night Football, under the lights, feels different. The Bucs played an okay game against a Cowboys team that they were expected to beat. Bucs’ fans should feel good about the win but the team will need to be better moving forward to achieve their ultimate goals.

Next week the Bucs will set sail for the bayou. Starting off their season with back to back road games for the first time since 2016 they will try and knock off the division rival Saints, who have been a thorn in Tom Brady’s side since his arrival in Tampa. We will see if the week two Tampa Bay Bucs are up for the challenge.