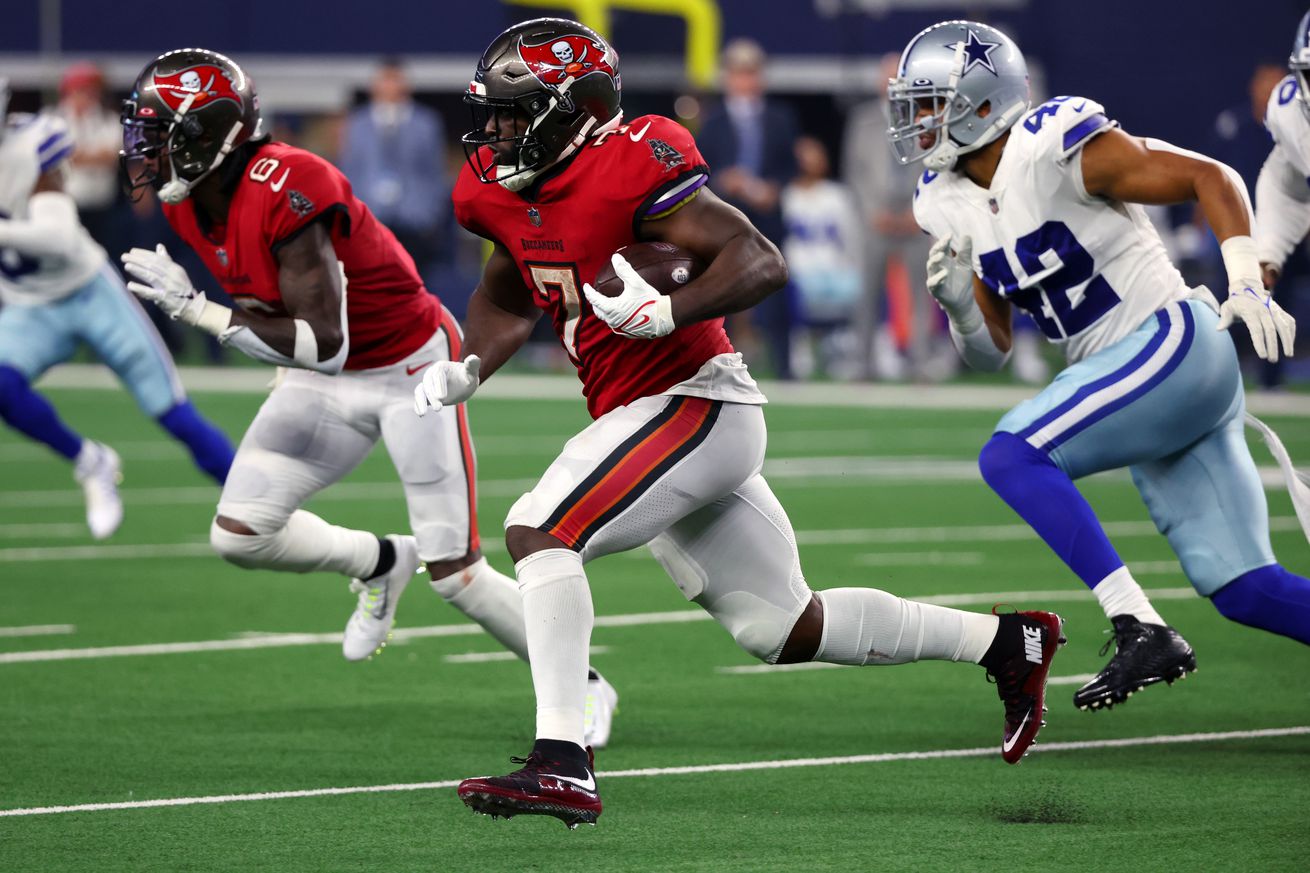 While not everything went perfectly — which is fairly normal for Week 1 — the Tampa Bay Bucs nevertheless manhandled the Dallas Cowboys en route to a 19-3 victory.

Dallas failed to generate any answer to Tampa’s offense or defense, with several players showed their mettle as they once again gear up for the title chase.

Let’s look at some of the top performers across the board.

For all the talk about Fournette being out of shape in the offseason, he looked raring to go Sunday night as he steamrolled the Cowboys to the tune of 127 yards on 21 carries — a whopping 6 YPC. He added two catches for 10 yards and fully embraced his new role as every-down back as he set a new personal high for rushing yardage as a Buc.

Not only did he set the tone on offense, but he also delivered some key moments in pass protection after starting left tackle Donovan Smith went down with injury. His massive pop on superstar Micah Parsons got everybody fired up.

The Julio catch was great, but Fournette in pass pro vs Parsons pic.twitter.com/H6UIgmiGih

If he can stay healthy and reliable, another dimension of this offense could be lethal.

We’ll also shout out Mike Evans and Julio Jones, who both looked awesome. Evans dominated man coverage tonight as usual, including a beautiful one-handed TD against Trevon Diggs. He finished with a team-high 5 catches for 71 yards.

Jones, meanwhile, looked totally refreshed compared to the last couple seasons. He reeled in a highlight 48-yard grab as part of a 3-catch, 69-yard night. He also carried the ball twice for 17 yards on end-arounds to showcase his speed, which clearly hasn’t faded yet.

And we’d be remiss to not mention Chris Godwin’s incredible comeback from a torn ACL. With a recovery of just 8 months, he looked to be his old self early on as he caught 3 passes for 35 yards. His night unfortunately ended early when he suffered a hamstring injury just prior to halftime. Hopefully it’s not something that keeps him out long-term.

There’s no way to really sugarcoat the fact that White struggled throughout the 2021 season, often looking overaggressive and inconsistent.

The team needed him to be better, and the early returns looked promising in Jerry World. White looked active in all three phases — run defense, coverage, and pass rushing — as he 8 total tackles, two sacks, and a pass defensed.

The two sacks were more impressive than a lot of his past work as a blitzer, as he utilized some nice moves to take down Dak Prescott.

His pass breakup came on 4th down to truly put the game on ice. It could’ve been a pick-6, but no need to be overly critical when it resulted in a turnover on downs all the same.

His running mate, Lavonte David, was active in his own right as he looks fully recovered from a foot injury that nagged him throughout the back-half of last year. He corralled 6 total tackles, two of which came for loss, and a pass defensed. If he and White are firing on all cylinders like the 2020 playoff run, opposing offenses are in trouble.

Finally, Antoine Winfield Jr. (now playing near full-time slot corner), Carlton Davis and Jamel Dean all did an exquisite job clamping down on Dallas’s receivers and forcing Prescott into one of the worst games of his career. Winfield recorded an interception to go along with 6 total tackles, and Davis and Dean both recorded pass breakups. CeeDee Lamb, the main threat on that Cowboys offense, got completely neutralized to the tune of 2 catches for 29 yards.

Carlton Davis allowed just 2 receptions for 25 yards on 9 targets as nearest defender as the Bucs defense held the Cowboys to 3 points.

There were some serious questions about the team’s ability to properly defend kick and punt returns, as it has been a weak point since Keith Armstrong took over the unit. The preseason was rough, but the new starting unit did a lot to help alleviate some concerns.

Dallas averaged 19.3 yards per return on four kickoffs (a long of just 22 yards), and they managed only one punt return for 3 yards. Helping to control the starting field position went a long way in the defense absolutely teeing off throughout the evening.

It’s just one game, but this was an undoubtedly positive step and something we needed to see.

Of course, Ryan Succop will get his due for making 4 out of 5 field goal attempts when the offense sputtered in the red area. He was obviously critical to the team’s win, but we have to ding him a little for completely whiffing on a chip shot that would’ve created more distance when the game was still close.

Overall, a great showing from basically everyone on the special teams unit. Rare to say in the Armstrong era but I’m sure we will all happily take it.