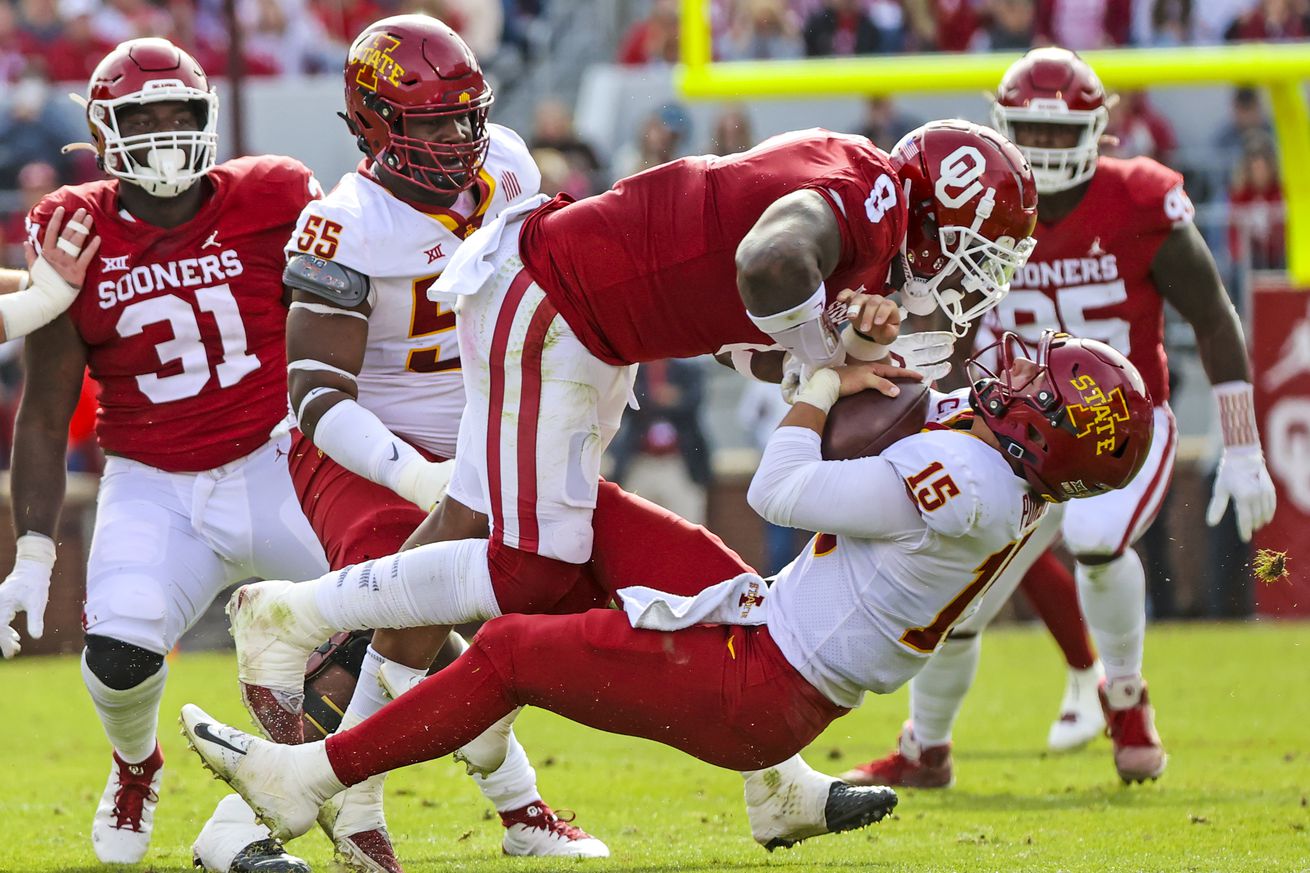 To pick just 30 out of all the talented young men about to start their NFL careers was difficult, but it’s done, and now we turn our attention to a potential replacement for Ndamukong Suh and another dip into the Oklahoma Sooner defensive lineman pool with standout Perrion Winfrey.

At Oklahoma, Winfrey played 20 games over two seasons, racking up 40 tackles – 16.5 for loss – and six sacks as well as three passes defensed and a forced fumble. His speed and strength combination is exactly what made him such a sought after prospect coming out of JUCO and he was able to put it on full display each and every week;

DT #8 Perrion Winfrey
Perrion is a strong undersized defensive lineman. His go to move is a speed to power move like what us Bengals fans saw with Lawson. He has good footwork and footspeed which helps a lot with this move. Here he speeds past the C and shows great pursuit pic.twitter.com/mUpc0i3VGY

Winfrey didn’t participate in many of the measurables at the NFL Scouting Combine, only running the 40 where he clocked a 4.89 – third best among defensive tackles. He also was not a participant in Oklahoma’s Pro Day due to a hamstring issue. Winfrey’s biggest shining moment following Oklahoma’s football season was the Reese’s Senior Bowl where he came away with MVP honors for his performance, notching five tackles, three tackles for loss, and two sacks. Winfrey dominated the week, raising not just his draft stock but also some eyebrows around the league;

Look on the bright side today. You won’t be getting bull rushed by @OU_Football’s Perrion Winfrey. Enjoy the weekend, everyone!#TheDraftStartsInMOBILE™️ pic.twitter.com/aSK8EKFkXv

WHAT WINFREY CAN DO FOR THE Bucs IN 2022

Winfrey joining the Bucs defense allows them to find a long term replacement alongside Vita Vea. While Ndamukong Suh has been a tremendous addition to the team over the last three seasons, he can’t play forever and adding to the young core of the team with a player like Winfrey will allow the defense to continue at a high level for years to come.

Bruce Arians said at the Scouting Combine that the Bucs were looking for more speed and ability to rush the quarterback from the defensive line. Alongside Vea, Winfrey can provide exactly that. Both have incredible bull-rush ability and can collapse the interior of the pocket on opposing quarterbacks. Not only that, but they can get past their blockers and bring the quarterbacks down themselves. The two of them side-by-side doesn’t just create chaos for interior offensive lines but will draw attention away from edge rushers like Shaq Barrett and Joe Tryon-Shoyinka.

NFL.com analyst Lance Zierlein has him graded as a 6.23, or “eventually be an average starter.”

While Zierlein is very good at what he does, Winfrey’s potential – especially within the first three years – will depend a lot on situation and scheme. In a place like Tampa he will have a bigger impact out of the gate given the situation of who he is surrounded by. Gaining one-on-one opportunities because of Vita Vea will benefit Winfrey, and the defense, greatly.

This could become a player that the Bucs are able to lock up for a long time in order to give the defensive line stability and effectiveness for the better part of the next decade. They have their true anchor, now it’s time to find the future alongside him.

Winfrey is currently being projected to go in the later third on day one of the NFL draft. In recent mock drafts he ranges anywhere from number 24 to the Dallas Cowboys to 32 to the Detroit Lions. The Bucs have become a popular projected landing spot for him at number 27.

There’s no question – at all – that Winfrey will not be around with the Bucs’ second pick. If they are looking to go younger and faster in the trenches, Winfrey could be a very smart pick. It may also depend on whether or not Georgia’s Devonte Wyatt is still around, another popular name linked to the Bucs over the last few weeks.

Either way, if the Bucs are going to pull the trigger on another Oklahoma defensive lineman, it has to be at number 27 and not waiting for day two.

Make the decision. There are a few needs for the Tampa Bay Bucs in this year’s NFL Draft, and Perrion Winfrey might be the exact player that Jason Licht and Todd Bowles are looking to add to their defensive line.

Vote in the poll, let us know what you think of Oklahoma University defensive lineman Perrion Winfrey, and stay tuned as we continue our daily NFL Draft targets for your Tampa Bay Bucs and our final mock draft from Mike Kiwak dropping the first morning of draft day!