Buccaneers on the Bubble: Preseason Week 2 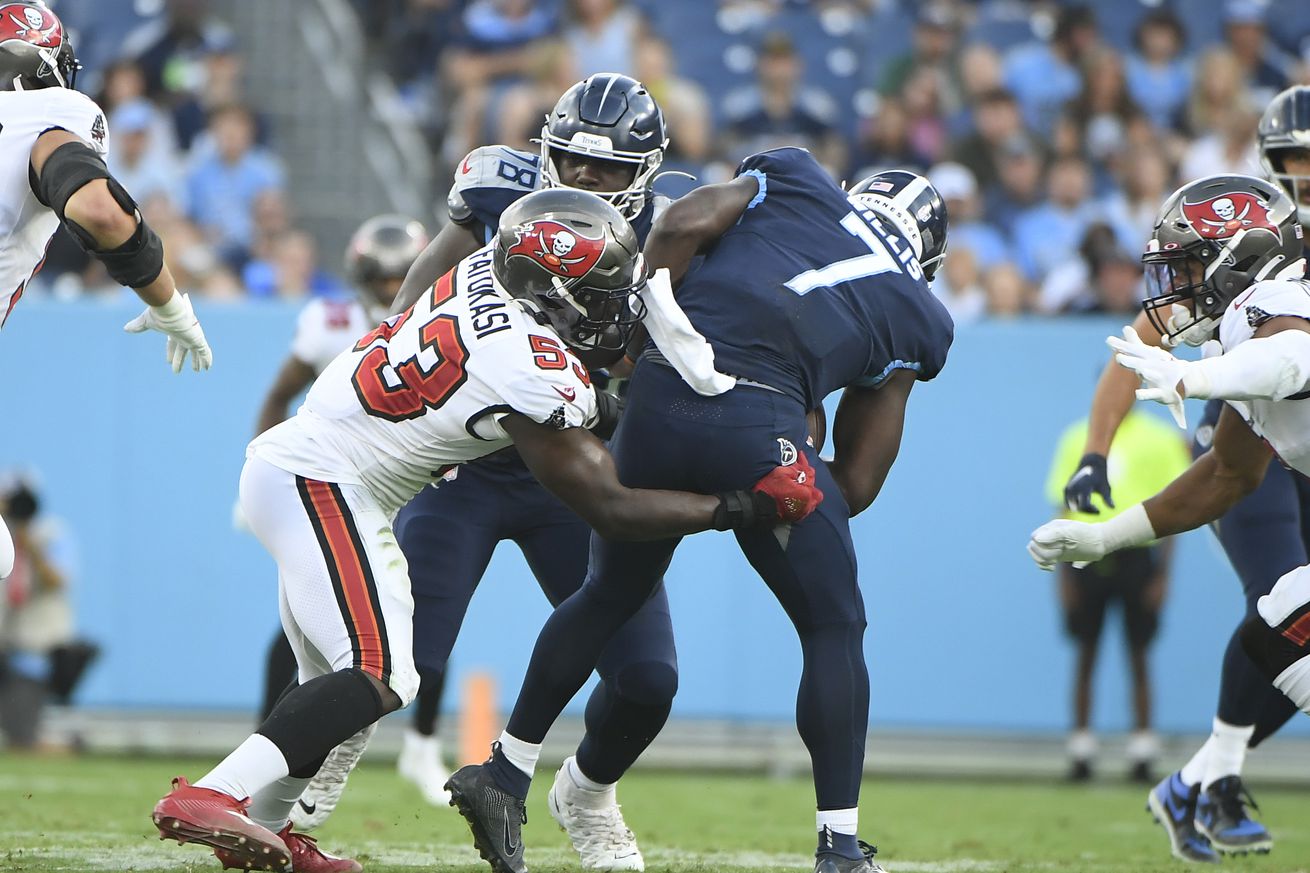 An ugly game still produced some notable outings from depth players – for better or worse.

Well, that was a game that happened.

The Tampa Bay Bucs slogged clumsily through four quarters and got dealt a 13-3 defeat at the hands of the Tennessee Titans Saturday night. In terms of evaluation, you certainly would’ve liked to see better overall from backups on the roster, but you must take what you can get.

After the team made its first five cuts earlier in the week, the coaches will now use this film to help determine the next five that will be due on Tuesday.

Here’s a look at players who might’ve helped or hurt themselves.

Players who helped themselves

LB Olakunle Fatukasi – After leading the team in tackles against Miami, Fatukasi did so again (9 total) Saturday and added even more stats to his ledger with 1.5 sacks and two quarterback hits. Fatukasi has looked like a multidimensional player who is also earning increased praise in practices.

At this point, it seems like he’s made a very strong case for the 53-man roster, especially since Grant Stuard remains sidelined due to his hamstring injury. Whether they keep four inside linebackers and leave Stuard off or decide to have five, Fatukasi really helped himself.

#Bucs HC Todd Bowles on the play of ILB Olakunle Fatukasi, who had 1.5 sacks and led the team in tackles pic.twitter.com/Avg9vpJCgv

WR Deven Thompkins – The man who has been consistently owning workouts, training camp and joint practices further stated his case for a final roster spot. On a night where stand-out offensive plays were far and few in between, Thompkins made some highlight catches. One went for just 4 yards, but it was a difficult contested grab between two defenders where he laid out to secure it and convert a first down. The other catch came on a beautiful deep crossing route where he left his man in the dust to secure a 34-yard gain.

Thompkins also got multiple cracks at punt returner, though he didn’t actually get a chance to return anything. Currently, it seems like he’s well-positioned to secure the sixth, or possibly seventh, receiver spot behind Mike Evans, Chris Godwin, Julio Jones, Russell Gage and Tyler Johnson.

On the @WFLA broadcast, Bruce Arians said this of Deven Thompkins: “He’s so athletic, so he’s got a big catch radius for a short guy. He’s got a catch radius of somebody who’s maybe 6-feet tall.” @GrandmasterDT #Bucs

K Ryan Succop – The biggest concern with Succop has persistently been his range. He’s rarely been tested from beyond 50 yards, and it’s nice to have that power in certain situations. With youngin’ Jose Borregales nipping at his heels, Succop showed that his 36-year-old leg still has some juice in it.

He converted a 52-yard field goal for the team’s only score of the night, making it his longest kick since the team’s Super Bowl victory a couple years ago. It was just one kick, but we know what to expect from Succop within 40 yards. Still, showing that range should go a long way in securing his job for another season.

DL Deadrin Senat – After missing all of last year due to injury and being released by the Atlanta Falcons, Senat is looking for a career reset with the Bucs. The 28-year-old USF product has started both preseason games so far, and he was very active against Tennessee with 4 combined tackles and a half-sack. He looked healthy and active as a run stopper and pass rusher. Overall, he made a bigger impact than other defensive line depth like Mike Greene or Willington Previlon.

CB Don Gardner – After just missing out on a toe-tapping interception against the Dolphins, Gardner sealed the deal this time around for Tampa’s first forced turnover of the preseason. He played good coverage against first-rounder Treylon Burks, gaining inside leverage of the route and capitalizing on an underthrown deep ball.

Gardner did badly miss a tackle in run support later on, but overall he’s had two good preseason games in coverage and has reportedly stood out in camp on defense and special teams. He clearly outperformed players like Rashard Robinson and Kyler McMichael.

EDGE Andre Anthony – Anthony started slow in camp but he’s been gradually generating more buzz, and he needed something to hang his hat on as final cuts draw closer. The seventh round rookie delivered on Saturday with a strong rush to secure a third-down sack late in the game.

Anthony dealt with injuries during his time at LSU, which obviously affected his draft standing and created some rust that needed to be knocked off. If Anthony can keep flashing at practice and maybe dial up some pressure in the final preseason game, he might just convince the team to carry five outside linebackers.

Players who failed to stand out

WR Jaelon Darden – Darden caught a touchdown last week, but then he completely faded away against Tennessee like most of the other receivers. However, he saw opportunities to produce and squandered them, most notably dropping a catch on 3rd down and logging a punt return of 0 yards that featured a lot of moving in every direction but forward.

Again, returning kicks is supposed to be a big part of Darden’s appeal, but he was bad last year and hasn’t shown anything this year. Rookie running back Rachaad White has looked much more natural on kickoffs, with three total returns for 76 combined yards in both games so far. If White – who is a lock to make the roster – can handle that duty, Darden is expendable in favor of players who show better receiving ability, like Thompkins or even Breshad Perriman.

WR Scotty Miller – Scooter is clearly talented, but it seems like he needs a fresh start elsewhere. He can still beat people downfield, but he suffered a drop against the Titans that would’ve created a huge chunk play. He did record a 15-yard catch on an intermediate route to convert a third down, but he’s been too quiet to generate any level of confidence in his job security.

He’ll probably stay on the team up until the final cuts, but I’d still say he’s on the outside looking in.

WR Kaylon Geiger – After showing some real promise against Miami, Geiger dropped an absolute dud, which cannot happen when you’re in his position. He fumbled and dropped two passes, one of which should’ve been a touchdown. He finished with two catches for 2 yards.

CB Kyler McMichael – The rookie UDFA might get stashed on the practice squad when the time comes but he’s been unspectacular in both games and camp, highlighted by a couple noticeable mental errors. He has good measurables (6-foot tall, 4.3 speed), but the talent just hasn’t consistently manifested itself and won’t carry him over any other names on the roster.

TE Bug Howard – Hasn’t really shown much as a receiver or blocker in limited snaps during either game. His most notable moment is being called for holding to negate literally the only good run of the Kenjon Barner era — a tragedy. Howard is another one likely destined for the chopping block with better players ahead of him in the position group.

WR Vyncint Smith – Two targets, no catches in two preseason games. It’s not looking good for Smith as more cuts loom, but his role as a gunner on special teams might get him one more in-game look. Maybe.