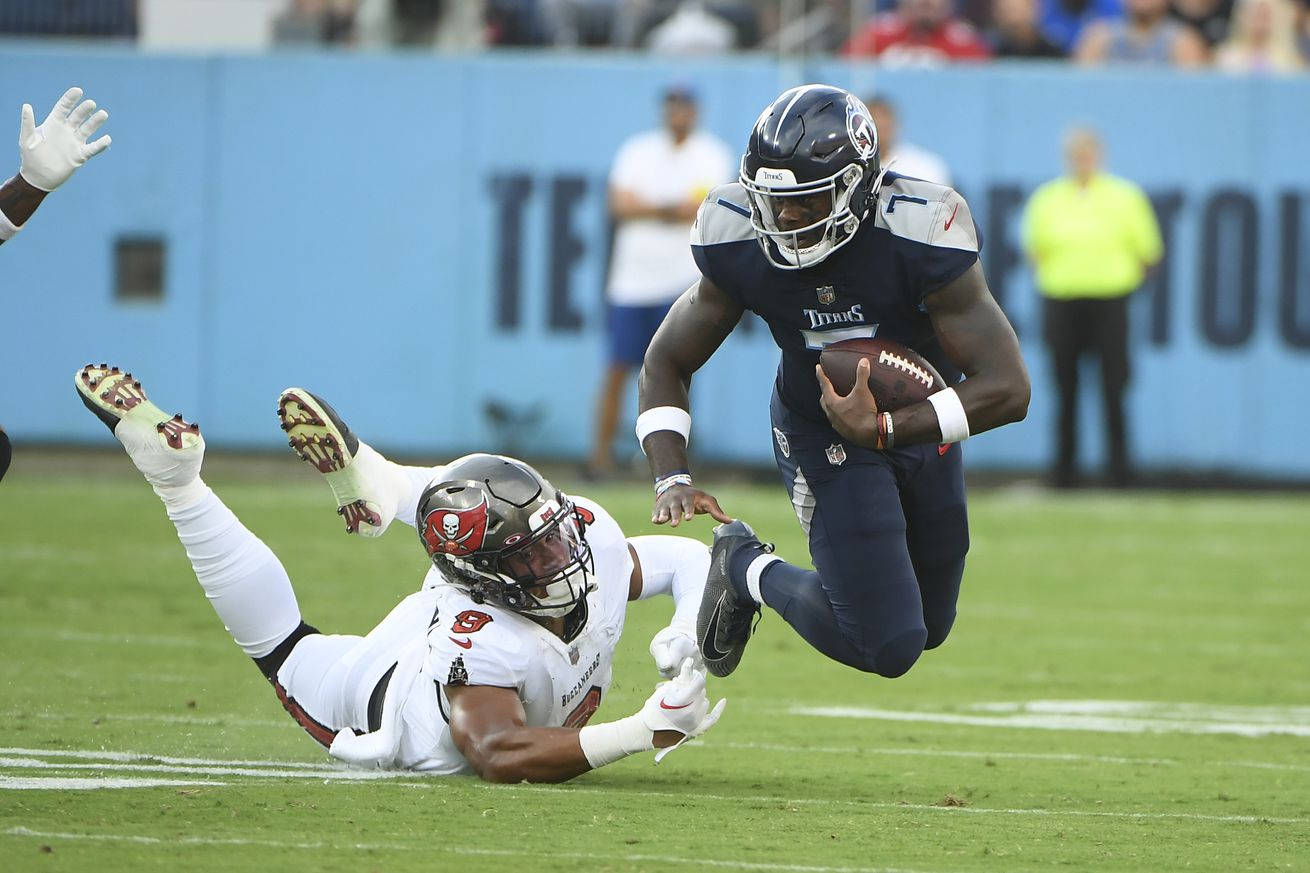 Bad play and a big injury headlined the night in Nashville

There were some pretty bad performances throughout the evening Saturday in Nashville and we aren’t talking about the performances on musical stages across the water on the Broadway strip. There was questionable play throughout Tampa Bay’s offense as well as special teams.

Quarterback Blaine Gabbert started the game and saw playing time in two possessions. Tampa Bay wasn’t able to move the ball well behind the arm of Gabbert and he finished his night 3-for-5 for 13 yards completing underneath throws to wide receiver Tyler Johnson and two to Leonard Fournette.

Kyle Trask would then come in and there were no improvements offensively. Their drives still sputtered and never truly got off the ground. Three-and-outs and dropped passes plagued the Bucs offense under Trask.

But when he did seem to settle in, his supporting cast couldn’t come through for him. Wide receiver Scotty Miller had a pass go off his hands on a well-placed deep ball by Trask. Two plays later, Trask escaped a sack and shoveled it to running back Rachaad White in front of him and at the end of White’s big run a Titans defender knocked the ball out.

Trask would have an interception added to his stat line late in the second quarter when his pass was disrupted at the line of scrimmage, causing the ball to wobble into a Tennessee defender’s hands.

Bucs defense had provided lots of good pressure throughout the evening. Second-year guy Joe Tryon-Shoyinka helped stop Tennessee on a 4th and short on their first position tying up Malik Willis’ legs and not allowing him to rush for the first down.

But Tryon-Shoyinka didn’t stop there. He continued to put pressure on the Titans backfield practically living there while he was in the game. He finished the game with three tackles.

Shaky play showed its head as the game when on for the defense, though. Missed tackles in the Tennessee backfield were popping up, bad angles on big plays — two particularly by linebacker K.J. Britt, and corners were losing their receivers on routes.

Titans added a touchdown just before the half on a short field following the Trask interception. Tennessee’s Willis had plenty of time in the backfield to scan the field on his passing plays, with his final pass on the drive being the touchdown throw.

The game looked like it was slowing down for Trask and the offense in the second half, or at least it started that way. On their first position of the third quarter, the former Gator connected with undrafted free agent rookie wide receiver Deven Thompkins on two big first down plays. Running back Ke’Shawn Vaughn had big runs on the drive. But Tampa Bay’s drive would quickly sputter to an end after getting deep into Tennessee territory. Which was the story for the rest of the night for the offense. However, they would eventually get on the board with a field goal by veteran Ryan Succop.

The second half defense played better and made stops when needed, including an interception by rookie cornerback Don Gardner shown below.

Tampa Bay couldn’t get things together for the majority of the night. The bad hits kept coming when veteran guard Aaron Stinnie went down with a bad knee injury. Stinnie was visibly frustrated with being injured and needed to be carted off. Bucs have already suffered injuries across the offensive line to center Ryan Jensen and tackle Tristan Wirfs. It’ll be interesting to hear from head coach Todd Bowles on what the severity of the injury could be.

This game is one that many players will hope did not happen. With just one preseason game left for the coaches to evaluate this game was crucial for many. Those on the bubble will hope to put on a better showing next week in Indianapolis when they play the Colts.