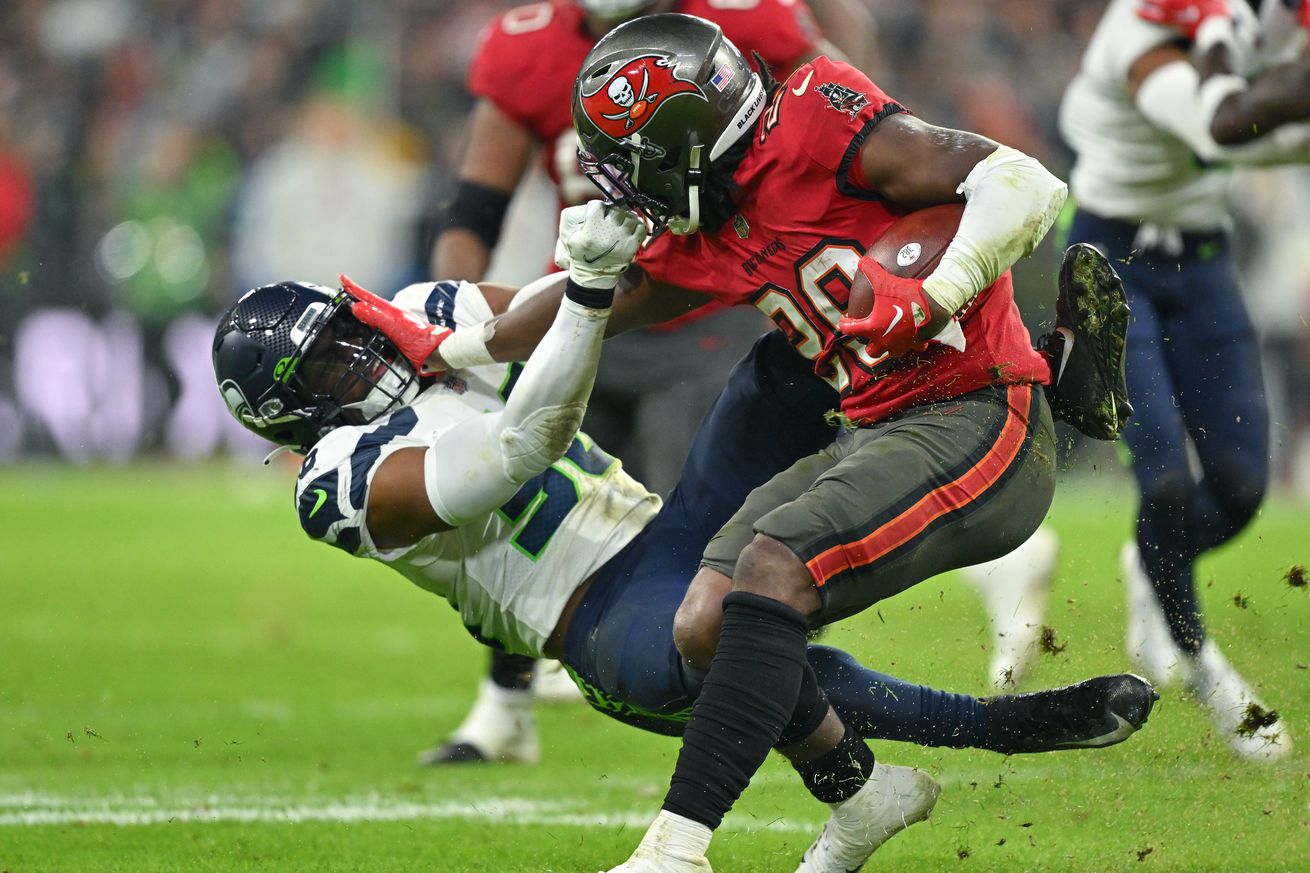 A “White” out drove a winning effort for the Bucs.

The Bucs needed a victory to build off last week’s nail-biting comeback against the Los Angeles Rams and go into their bye at .500.

They responded with another nail-biter except on the opposite end, barely holding off a late Seahawks blitzkrieg and coming out on top, 21-16, in Munich, Germany. While it became much too close due to Tom Brady’s first interception since Week 1, this game honestly stood out as one of Tampa’s best of the season.

Several welcome standouts flexed their muscles. so let’s give them their credit.

We all bore witness to the Rachaad White coming-out party, and it was glorious. The rookie finally got a lion’s share of the carries after flashing brief glimpses of his potential during the first half of the season, and he responded by recording his first career 100-yard game.

A 4.8 yards per carry average on 22 carries, including the longest rush for the Bucs this year (29 yards), is exactly what the team needed to deliver a balanced offense. White created some excellent highlights whilst doing so — most notably a crushing stiff arm to Quandre Diggs.

If not for White’s huge game, Chris Godwin would’ve definitely received top honors. He made difficult catches all day long and looked his best since coming back from injury. With six receptions for a team-high 71 yards and his first score since Week 11 of 2021, he delivered like his old reliable self.

Julio Jones also made noise with his second consecutive contest with a score, logging three total catches for 53 yards. If he can remain healthy and provide those occasional spurts of greatness, this offense will be much more lethal.

We can’t neglect Leonard Fournette, who did rush 14 times for 57 yards and a score before leaving with a hip injury. Him being the primary runner has generally not gone well, but perhaps being the change of pace to White might maximize potential for him and the entire ground game.

Devin White tragically lost his father just days before this tilt, and he channeled his emotions into his best game of the year. White racked up 9 total tackles, 2 sacks and a forced fumble. The turnover was not only the team’s first since Week 5, but it also came deep inside the redzone to stymy a Seahawks scoring drive.

White has been criticized from all directions for his inconsistency, myself included, but Sunday was a day where we all need to offer proper credit and admiration. White balled out and did so with much bigger things than football on his mind.

Joe Tryon-Shoyinka provided some much-needed fire as well on the edge, as he generated multiple pressures early in the game and finally pinned down a quarterback for an elusive sack. JTS’s numbers don’t always pop, but he’s absolutely taking strides in his development and continues to be an impactful player.

Jamel Dean drew DK Metcalf as his primary assignment, which went quite poorly three years ago (6 catches for 123 yards and a TD) in Dean’s first major action as a pro. It was a totally different story Sunday, as Dean largely pinned down Metcalf (6 catches, 71 yards but not all were allowed by Dean). Dean, who made six total tackles and defended a pass, continues to be the team’s No. 1 corner this year.

Camarda has been on a kicking heater the last two weeks. After winning NFC special teams player of the week for his dominant performance against the Rams, Camarda delivered more excellent kicks — fittingly in a soccer stadium.

He punted only twice, but it was for 122 yards and a 61-yard average. One of those kicks was a whopping 64-yard net that resulted in a fair catch and totally flipped the field. Camarda is a weapon and a much better punter than Bradley Pinion. Fans should be much less skeptical of that draft pick right now.