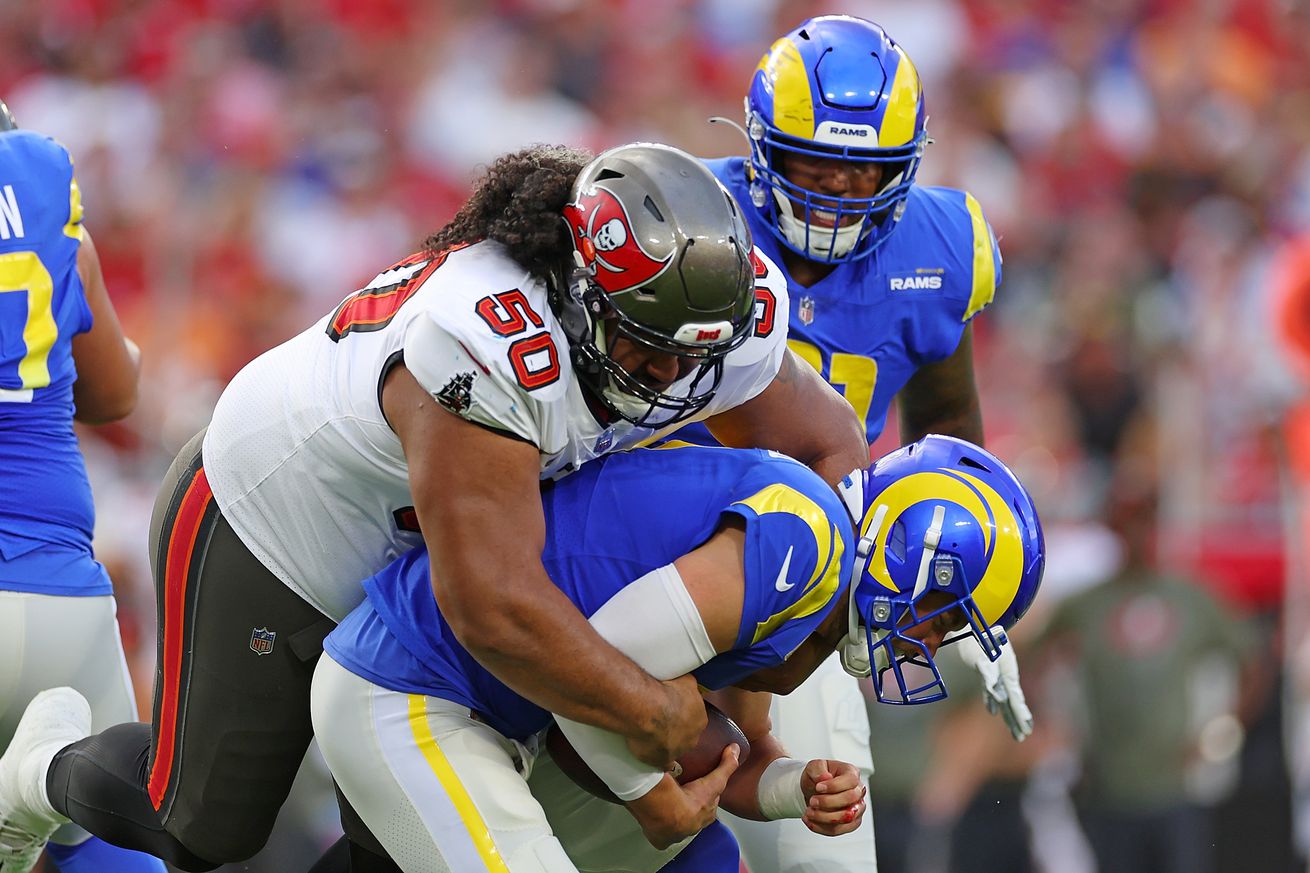 In a massive relief, multiple Bucs played well and they broke their losing streak.

It looked mostly bad, and it’s clear there is still plenty of work to do, but Sunday’s critical tilt against the Los Angeles Rams finally yielded a positive result as the Bucs came from behind for the 16-13 victory.

Tom Brady set the NFL record for career comeback wins with 55 as he delivered a strike to rookie Cade Otton with just 9 seconds remaining, and it ended Tampa’s losing skid at 3 games and vaulted them back into first place in a putrid NFC South.

They’ll need to build on it on a tough week, as they must travel to Germany to face the surging Seattle Seahawks, but we can all relish this make-or-break win against a persistent rival.

Let’s give some shoutouts.

Yes, Brady dragged the team to victory as he has done so often throughout his career and it was impressive. He achieved yet even more milestones in his prolific career between being the first player to reach 100,000 career passing yards and breaking the comeback wins record. That said, let’s give the main shoutout to the rookie who served as his primary option throughout the final drive.

Down four with less than a minute left and no timeouts, Brady — who finished 36 of 58 for 280 yards — dissected the Rams’ defense and got an assist from a defensive pass interference to set up at the 1 yard line. It all started with a beautiful 28-yard completion to Otton down the middle of the field to even give them a decent chance.

The play that started it all, Bucs rookie Cade Otton down the seam… and he was rewarded with the game-winning TD.

Finished with 5 receptions for 68 yards on top of the TD. Quietly been an awesome addition in Tampa. pic.twitter.com/MANzL0vt6L

Otton then snuck out at the 1 and made the game-winning grab, which was also his first career touchdown. He made several other good catches earlier in the game, including one wiped away by penalty, to finish with five receptions for a team-high 68 yards and the score. He’s really starting to click lately and has the makings of a plus player at the tight end position.

Scotty Miller produced that horrific endzone drop that would’ve put the team ahead much earlier, but there’s no denying his usefulness in the fourth quarter. He made seven catches for 53 yards in his best game of the year.

The Rams’ offensive line has taken an even harder whipping than Tampa’s, so it was pivotal that the front four get consistent pressure on Matthew Stafford. Vea luckily picked a great day to have his best game of the year, creating constant push in the middle to disrupt the run game while collecting two sacks.

Vea continues to sharpen his form after starting off the year poorly, which is much-needed good news.

On the second level of the defense, Lavonte David carried on his excellent play. While he made only three tackles, one was for loss and he also defensed two passes, including one in the red zone. Running mate Devin White also responded to heavy stream of criticism with a strong game of his own, totaling four tackles and two QB pressures.

Camarda may have logged the best punting performance in Tampa history. He tied the team record with a 74-yard punt, and he should’ve recorded a 60-plus-yard punt that clearly looked down at the 1-yard line (the team declined to challenge).

Nevertheless, Camarda continually flipped the field and kept pressure off the defense in a tightly contested game. Overall, four of his six kicks went inside the 20 and he averaged a whopping 59.5 yards per kick. Young stud.

Jake Camarda averaged 59.5 yards per punt across his six punts tonight. The 59.5 average is tied for the highest mark by any punter with six-or-more punts in a game in NFL history.

Ryan Succop also nailed three of his four field goal attempts, one of which being a 50-yarder. One attempt was blocked but Succop did nothing wrong there. Making his kicks at a 22-for-24 clip, Succop is a strong front-runner for Pro Bowl consideration.

Jaelon Darden continued his positive play, returning eight punts for 82 yards with a long of 17. He’ll likely enter next week as a top 10 player by return average. Not bad for somebody many of us, myself included, were ready to push out the door after preseason.