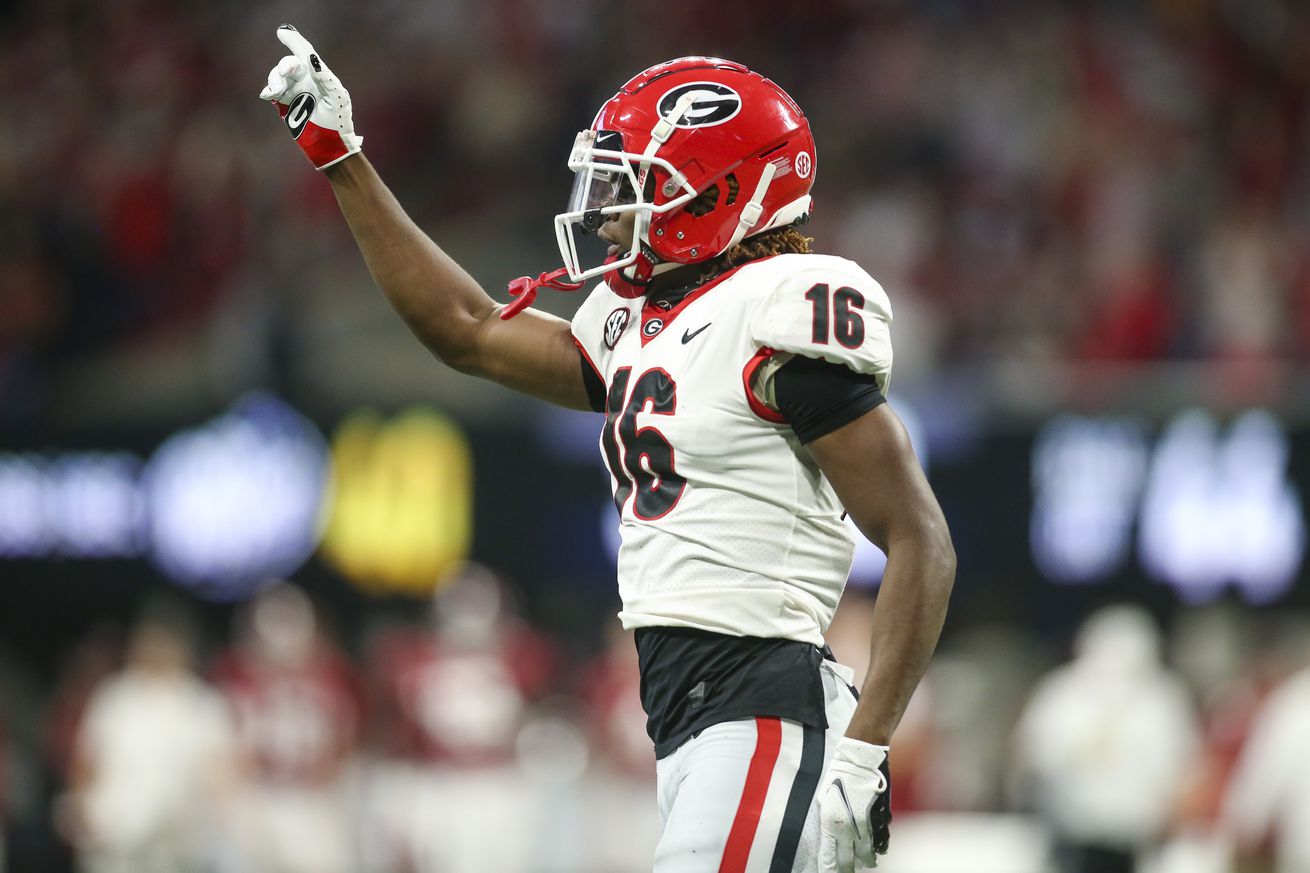 As we near the end of our 2022 NFL Draft profile series, we take a look at a safety who might be in play for Tampa Bay as a potential long-term partner for Antoine Winfield Jr.

The Bucs hit a home run when they selected Antoine Winfield Jr. in the second round of the 2020 NFL Draft. Given his play over the last two years—including a Pro Bowl season in 2021—he already looks primed to receive a second contract in Tampa Bay. But with the departure of Jordan Whitehead this offseason, the team is currently without a long-term partner for Winfield at the safety position.

With Whitehead now a member of the New York Jets, the Bucs have a few potential fill-ins for 2022. The team went to free agency for some help, bringing both Logan Ryan and Keanu Neal aboard on one-year deals to join Winfield and Mike Edwards at the safety position. But with Ryan likely to play more snaps in the slot, Neal not far removed from some major injuries (and one year removed from playing linebacker in Dallas) and Edwards in a contract year, Tampa Bay might look to the NFL Draft for a long-term option to play alongside Winfield.

One of the few guys from this year’s safety class whose name seems to be popping up in connection with the Bucs is the hard-hitting Lewis Cine out of Georgia. Today, we focus our penultimate draft profile on the 2022 national champion.

Cine’s journey to the NFL has certainly been a special one, as he was born in Haiti and grew up in Florida before moving to both Massachusetts and then Texas during his high school career. As a 247 Sports composite four-star recruit out of Trinity Christian School in Cedar Hill, Texas, Cine had 36 scholarship offers and chose to sign with Georgia over the likes of Texas, Ohio State, Michigan, Florida, Alabama, Auburn and Clemson. That turned out to be a fantastic choice, as he went on to have a great career with the Bulldogs—a career that was capped off with a national title win over Alabama earlier this year.

It was Cine’s junior year—2021—that he really took off and hit the national spotlight. He was a key player in Georgia’s national championship run, finishing the season with 73 tackles (43 solo), two tackles for loss, an interception and 10 passes defended in 15 games. In the College Football Playoff National Championship Game, he tallied seven tackles, one tackle for loss and a pass breakup on his way to being named the game’s defensive MVP.

Cine’s performance as a junior earned him a Third-Team All-American nod from the Associated Press, as well as AP All-SEC First Team and Coaches’ All-SEC Second Team honors. Not to mention, he was a semifinalist for the Jim Thorpe Award, which is given to the nation’s top defensive back.

Cine was impressive at the NFL Scouting Combine back in March, running the 40-yard dash in 4.37 seconds—the fifth-best time of any safety in the 2022 class. His 36.5-inch vertical was the seventh-best among safeties, while his 133-inch broad jump was the top mark for the position. Pro Football Focus’ Michael Renner named Cine as the safety who came away from Indianapolis as the biggest winner.

At Georgia’s Pro Day in mid-March, Cine once again posted a 37-inch vertical. His measurables on the whole make it easy to understand why he’s so highly regarded heading into this year’s Draft.

Cine possesses exceptional height and overall length for a safety entering the NFL, and he hits harder than his weight might indicate. The Bucs will certainly like the hard-hitting aspect of his game, especially as they search for Jordan Whitehead’s replacement. Just last week, ESPN’s Jenna Laine reported that Tampa Bay brought Cine in for one of its top-30 visits:

The Bucs hosted Georgia safety and 2022 national championship defensive MVP Lewis Cine for a top-30 visit, per source. I asked GM Jason Licht if signing Logan Ryan and Keanu Neal precluded them from drafting a safety and he said, “No.”

On the surface, Tampa Bay’s safety room looks crowded heading into 2022. With Winfield, Edwards, Ryan and Neal all figuring into the picture in some form or fashion, it might feel difficult to see Cine being a key contributor in year one. However, don’t be so sure. Ryan is likely to see a lot of snaps at nickel, while Neal is bound to be moved all around the field (though to be fair, Todd Bowles moves all of his safeties around, doesn’t he?).

So, that leaves Winfield and Edwards as the presumptive starting safeties. With that in mind—and with the way Bowles will likely use the other two—Cine may very well slot into the role that Edwards occupied the last two years—a rotational safety that can step in and make plays when he’s needed. Cine is an exceptional run defender. As The Athletic’s Dane Brugler said:

“He is at his best as a physical run defender, running the alley like a freight train and tuning up his target.”

But don’t let the fact that he’s a strong run defender make you think he lacks range in pass coverage. He’s a smart player with good instincts and discipline. Bowles would find a way to get him on the field in advantageous positions during his rookie season, and at the very least, he’d be promising depth with high upside and the potential to assume a starting role in 2023. Not to mention, he could add significant value as a special teamer.

While Cine could improve his hands and develop a bit more reliability in coverage on the whole, it’s easy to envision him becoming a quality starter within the first few years of his NFL career. Georgia head coach Kirby Smart once said that Cine “has all the qualities” that a coach would look for when designing a safety. It’s not difficult to see that when you watch his game, especially when it comes to his toughness.

With the Bucs letting Whitehead leave in free agency this offseason, the addition of Cine could very well give them their safety duo of the future. Winfield’s range and ball skills combined with Cine’s violent tackling ability against the run would give Bowles exactly what he needs in the back end of his defense for the foreseeable future. In fact, Diante Lee’s recent mock draft for The Athletic goes as far as naming Cine “Tampa Bay’s turbo-charged Jordan Whitehead replacement.”

Given that Ryan and Neal are on one-year contracts, the Bucs would be wise to look toward the future at the safety position. How Edwards performs in 2022—and whether or not the Bucs re-sign him heading into 2023—could impact Cine’s three-year outlook, but it’s unlikely. Cine offers a different skill set than Edwards. And really, the idea of Winfield, Edwards and Cine as the team’s safety trio for years to come feels like an intriguing one.

Cine is widely regarded as one of the top three safety’s in this year’s draft class. Brugler projects him as the No. 33 overall prospect, projecting him to go in the first or second round. The analysts at The Draft Network gave Cine a consensus grade of 82.83 out of a possible 100, which translates to a second-round value.

The former Georgia standout is showing up in the first round in just 14.6% of mock drafts, according to his NFL Mock Draft Database profile. However, this draft class as a whole isn’t believed to possess 32 clear-cut first-round picks. That leaves room for a team picking in the late 20s—like the Bucs—or early 30s a bit of wiggle room.

That could mean selecting a player ahead of his projected draft position to avoid losing out on him before getting back on the clock in the second round, or it could mean trading back with hopes of taking that player and picking up more picks in the process. In the Bucs’ case, that means selecting Cine with the No. 27 pick or trying to trade down to the end of the first round or early second round to select him. For what it’s worth, Cine has been mocked to the Bucs in the first round by Sports Illustrated, Pro Football Focus and FOX Sports in recent weeks.

It’s time for you to chime in, Bucs Nation. What do you think of Lewis Cine as a potential fit in Tampa Bay? Vote in our poll and feel free to discuss your thoughts in the comments down below.