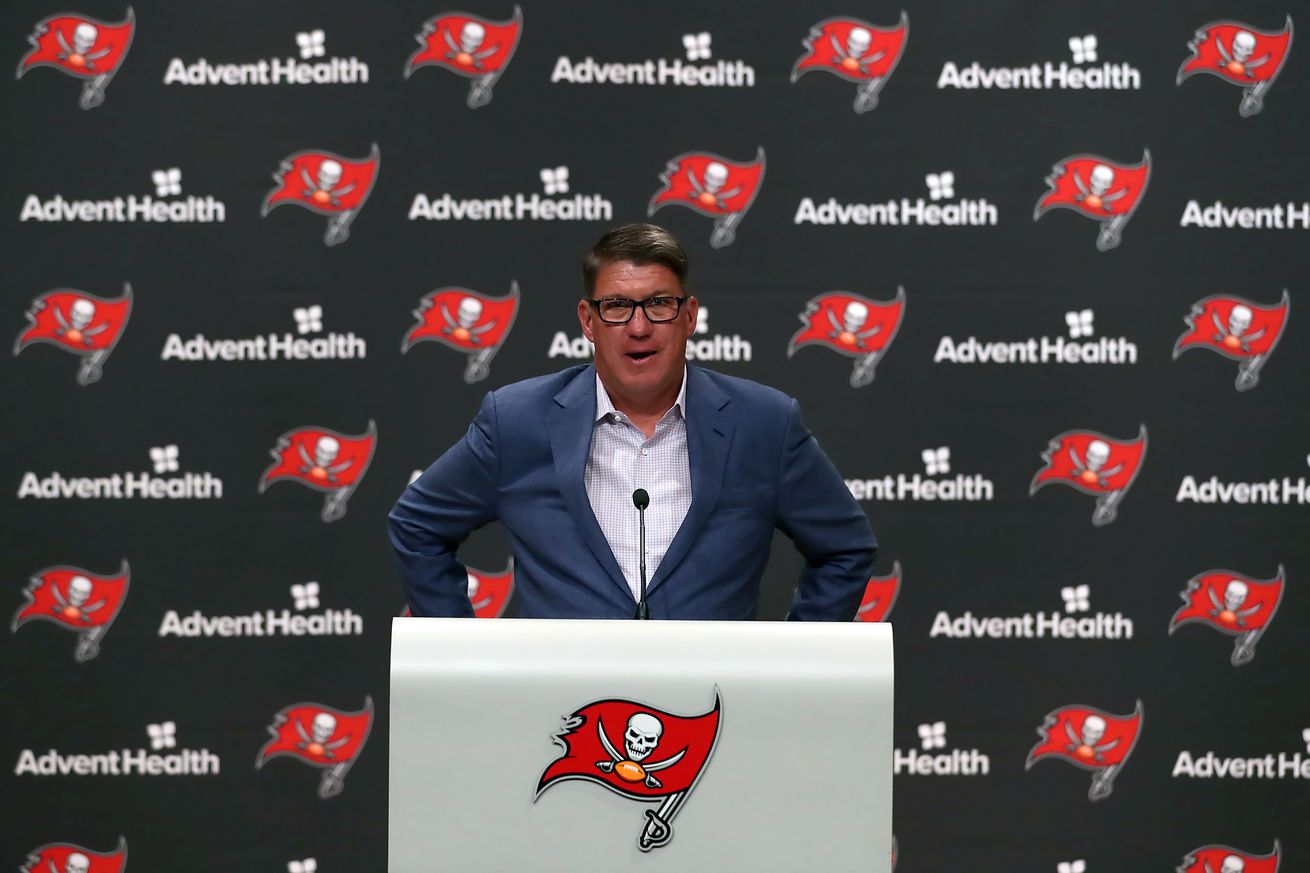 How have draft needs changed since our first look a couple months ago?

It was the 5th of March.

Bucs Nation existed as a lawless, chaotic arena of war – multiple factions clashing over how the Bucs should proceed with the future following the egress of the Elder GOAT. The Clan of Russ and the Gabbertonians stood at odds, and the Trask Collective grew frustrated with its lack of a voice and believers when it came to seizing the throne. Multiple camps were thought to be seeking merchant alliances elsewhere, with group leaders like Ryan Jensen and Carlton Davis on the precipice of secession.

Alright, perhaps I’m indulging in a little hyperbole/playing too much Elder Scrolls lately, but there was an awful lot of uncertainty just a few weeks ago. We published our first look at potential NFL draft targets for the team before free agency and everything else that proceeded it occurred, and needless to say the projection has shifted quite a bit.

So now that it’s draft week and the team’s remaining needs are much clearer, let’s do another quick temperature check to see where we stand ahead of the weekend.

Brady is back, and the roster still has Blaine Gabbert, Kyle Trask, and (somehow) Ryan Griffin. No draft picks will be allocated here.

Leonard Fournette decided to return on a healthy 3-year deal, so the team has its starting back locked up. Gio Bernard also returned on a 1-year deal to join Ke’Shawn Vaughn as backups/3rd down options, but the word is that the coaching staff would still like to add.

The team has shown a lot of interest in a variety of flavors, from the likes of third down specialists like Notre Dame’s Kyren Williams and Arizona State’s Rachaad White to pounders like Florida’s Dameon Pierce. Keep an eye on late Day 2/early Day 3 if the right value presents itself.

The team did major work to secure the top end of the receiver depth chart, as it re-signed Chris Godwin to a big-money deal and also brought in Russell Gage on a 3-year contract.

With the starter positions secured, the team’s interest in picking a receiver Round 1 has likely been tempered unless there’s an excellent value staring them in the face. It’s more likely they attempt to solidify the depth after being majorly tested at the end of the regular season and playoffs in 2021.

Look for players like Danny Gray (SMU) and Makai Polk (Mississippi State) later on in the draft who have intriguing traits.

Rob Gronkowski is still deliberating retirement, but he’s made clear that he will be playing with Tampa if he does come back for his age 33 season.

Surely the team would’ve appreciated a firm answer by now, but Gronk has earned the time to decide. Regardless, the team should be on the lookout for a tight end of some kind this year. As previously stated, Cam Brate can’t handle TE1 duties and O.J. Howard is gone on a prove-it deal in Buffalo, and the roster currently has nobody who can block worth a damn.

Names to watch remain all the top targets, including but not limited to Trey McBride, Jelani Woods, Cade Otton, Jeremy Ruckert, and Daniel Bellinger.

The Bucs did bring back Josh Wells and signed Fred Johnson too, so the roster is pretty well set with veteran tackle depth.

If the team identifies someone who has that inside/outside flexibility in the later rounds, you can never rule out a move there.

The Bucs did well to retain Jensen for what probably be the rest of his career, and they straight-up stole Shaq Mason – an elite player – from New England for this year’s fifth rounder.

They still should select a guard in one of the first four rounds to further solidify depth and add to the competition at left guard, which currently looks to be Aaron Stinnie vs. Robert Hainsey vs. Nick Leverett.

Getting one of the top two guards (Zion Johnson and Kenyon Green) in the first round might be dicey, but there will be other options on Day 2 like UCLA’s Sean Rhyan and Oklahoma’s Marquis Hayes.

I’ve seen a lot of people mock a true edge rusher to the Bucs in the first two rounds, but I’m not so sure that’s a serious possibility.

The team clearly likes 2021 first-rounder Joe Tryon-Shoyinka to take over for Jason Pierre-Paul opposite stalwart Shaq Barrett, and Anthony Nelson showed some impressive development last year by logging career highs in sacks and pressures. They’ll lean on the latter for that third rusher role.

Cam Gill is also around, and he’s put in more and more meaningful snaps over the last two years.

Again, not ruling anything out, but this feels like a Day 3 add much more than it does days 1 or 2.

This is the clear No. 1 need on the team right now, and it should be the primary focus on Day 1 or early Day 2.

Ndamukong Suh has yet to re-sign still, so the team has only William Gholston, Rakeem Nunez-Roches, and Vita Vea as proven starters on the defensive line. Even then, Suh and Gholston are at the respective tail-ends of their careers, so the team needs a long-term impact player next Vea in the trenches.

Unfortunately, picking at No. 27 with limited capital for trade ups leaves the Bucs at the mercy of availability and value. Devonte Wyatt and Jordan Davis are the consensus top players at the position, but they could very well be long gone. Houston’s Logan Hall is interesting, but he might constitute better value with a trade down first. The same can be said of UConn’s Travis Jones.

With Lavonte David’s age/contract status and Devin White’s stalled development, this strong class could tempt a pick within the first three rounds.

Any of the three Georgia linebackers (Nakobe Dean, Quay Walker and Channing Tindall), Wyoming’s Chad Muma, and Alabama’s Christian Harris all stand out.

While Davis did return for the long-term future, the team should still seek quality value sooner rather than later.

Licht faces down the possibility of losing Jamel Dean next off-season, and Sean Murphy-Bunting is a replacement-level player who shouldn’t prevent investing in an upgrade at the slot corner position. In general, the only good depth option is Ross Cockrell.

Round 1 shouldn’t be ruled out here if the best defensive tackles are gone and the team can’t find a trade partner. Andrew Booth, Kaiir Elam and Kyler Gordon are all intriguing possibilities. On Day 2, the team might be interested in Martin Emerson, Roger McCreary or Coby Bryant.

The Bucs did end up losing Jordan Whitehead to the New York Jets, but they compensated by signing Keanu Neal and Logan Ryan to one-year deals in an obvious bid to get as much veteran presence in the secondary for this last Brady championship run.

With that in mind, the long-term need doesn’t go away with Mike Edwards, Neal and Ryan all free agents next year, but it makes a big investment less likely in Round 1 since you’d prefer that pick to contribute starter snaps right away.

Michigan’s Daxton Hill could still be appealing in the first round given his slot corner/safety versatility, but others like Lewis Cine and Jaquan Brisker – more box defender types – might receive a pass.

What do you think, Bucs Nation? What would you consider the team’s biggest need in the draft? Let us know by voting in the poll and chatting in the comments.