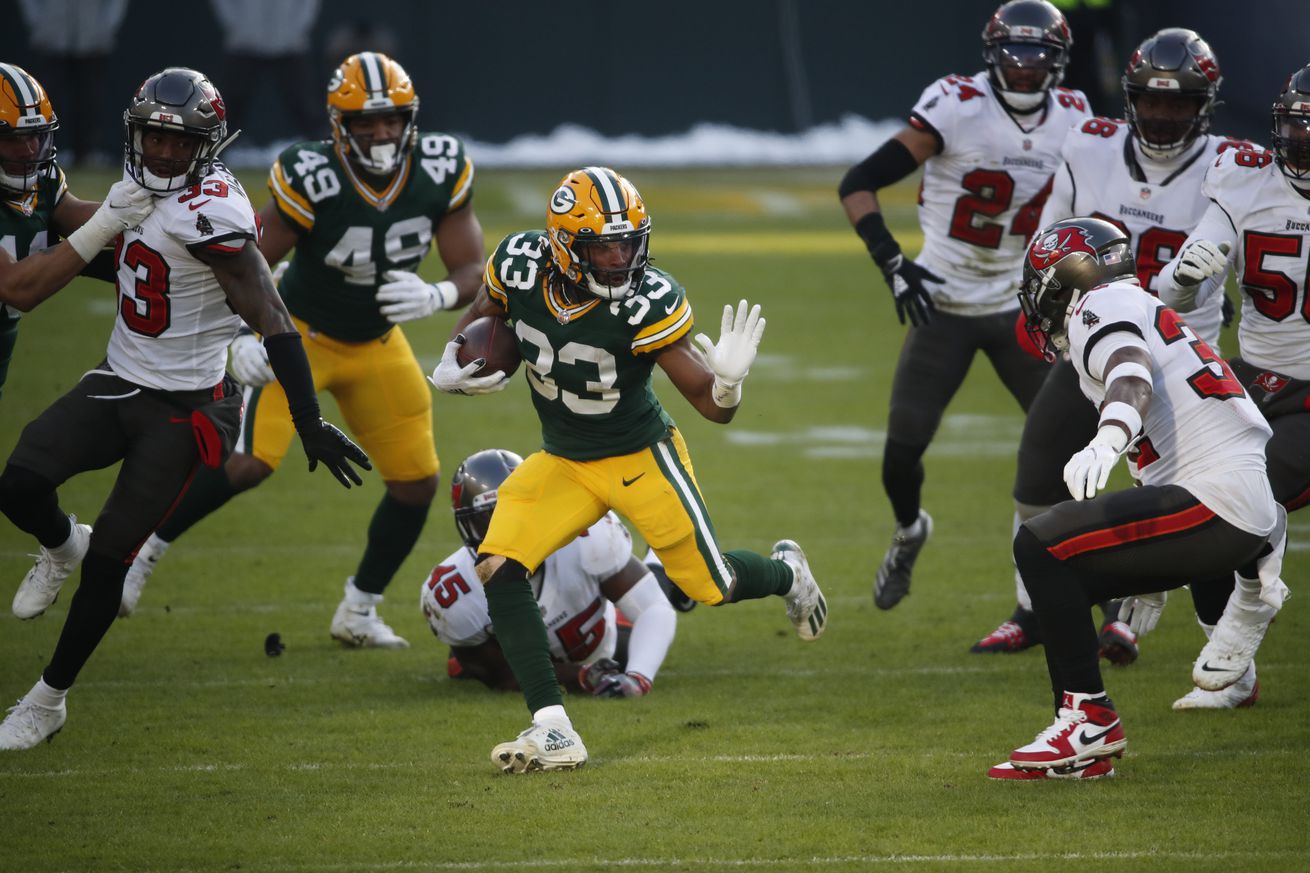 TThe play host to your The Tampa Bay Bucs play host to the Green Bay Packers Sunday afternoon inside Raymond James Stadium. Tampa Bay is entering this game with a slew of injuries and Green Bay is coming in after an impressive victory in Week 2.

We fired off some questions regarding the state of Green Bay’s team for Acme Packing Company’s Jon Meerdink to see if they can shed some light on what’s going on with the Packers heading into Week 3.

Bucs Nation: There were two different versions of Green Bay we saw in Weeks 1 & 2. Which one is most likely to show up on Sunday?

Jon Meerdink: Truth be told, I’m really not sure. I think the offense is still figuring itself out, and there are two big reasons for that. The first is the offensive line. Left tackle David Bakhtiari is still out, and they just got right tackle Elgton Jenkins back for Week 2. They’ve mixed and matched a bunch of pieces as those two have figured things out, and it’s led to an offense that can feel a little disjointed at times, especially in the deep passing game. Both Aaron Rodgers and Matt LaFleur have said they’re a little hesitant to go deep until things are a little more settled up front.

The second reason is the wide receivers. Even if the “Aaron Rodgers doesn’t trust rookie receivers” thing is overblown (plenty of rookies have done well with him, look it up), it’s clear that things aren’t entirely smooth with some of the new pieces. Sammy Watkins is still sorting out his role in the offense, while Christian Watson and Romeo Doubs are still figuring out how to play at the NFL level. I think there’s reason to be optimistic about all three, but it’s very clearly a work in progress.

If you twist my arm, I’d lean toward more of a Week 1 effort against the Bucs. Todd Bowles has always done pretty well against Aaron Rodgers, and betting against offensive cohesion seems pretty safe at this point.

BN: The Packers have a good 1-2 punch in Jones and Dillon out of the backfield. How does their offensive scheme allow for both — specifically Jones — to have such good success in run and pass plays?

JM: First and foremost, both Jones and Dillon are just really talented players. Even though Jones is small (5-foot-9 and only about 195 pounds, maybe less if you ask Aaron Rodgers), he has tremendous balance through contact and can slide through the tiniest crease if you give it to him. Dillons, meanwhile, is a good-natured sledgehammer with soft hands, and he’s really coming into his own as both a runner and a receiver.

But schematically, the Packers have a diverse attack that puts both in position to do what they do well. In addition to the wide zone runs that the NFL has grown accustomed to seeing from every iteration of the Shanahan tree, the Packers have mixed in a few more power looks this year, pulling interior lineman at a rate we’ve never really seen under LaFleur. They’ve also been quick to put both Jones and Dillon on the field together,

BN: Rodgers continues to show he is playing at a high level regardless of age as he demonstrates good mobility in the backfield when the pocket is collapsing. What can the Bucs do to make sure Rodgers goes down and goes down quickly?

JM: I’d start by trying to take away the two receivers Rodgers relies on the most: Allen Lazard and Randall Cobb. If you can take away those two, especially Lazard down the field, I think there’s a pretty good chance Rodgers will just check down for the rest of the game. That’s more or less what happened in Week 1, and I think it’s a pretty good bet to slow the Packers’ offense until Rodgers shows he’s willing to lean on Watson and Doubs a bit.

BN: Tampa Bay has shown in the first two weeks great play from their secondary. What will the Packers do to exploit any potential vulnerabilities?

JM: Well, there’s two answers here: what I’d like the Packers to do, and what I think they will do.

I’d like to see the Packers lean more on their speed at receiver. Christian Watson is about as good as it gets in terms of a size/speed combination; he posted a 4.36 40-yard dash at 6-foot-4 and 206 pounds. But he’s been targeted deep just once, and you’ve probably seen the result: a would-be 75-yard touchdown clanked off his hands on the Packers’ first offensive play of 2022, and they haven’t tried it again since. I’d like to see them test defenses with that speed again, whether it’s Watson or Romeo Doubs.

In reality, the Pakcers will probably lean on shorter stuff and hope they can execute their way down the field. You’ll probably see a lot of checkdowns, crossers, and swing passes to Aaron Jones and AJ Dillon. I guess I’m taking the long way to saying I don’t think the Packers are going to try to test the Bucs all that much, and I am pre-worried about that.

JM: I’m starting to feel a little bit like a broken record, but I’m not sure because I’m not sure the Packers are sure. So far, we’ve seen one really bad defensive performance and one pretty good one. The Vikings shredded the Packers’ secondary in Week 1, but outside of the Bears’ first drive, the Packers’ defense shut down Chicago — with the caveat that Justin Fields is starting to look like he might be pretty, pretty bad.

The Packers’ defense is certainly talented. Kenny Clark, Rashan Gary, and Preston Smith have done a phenomenal job creating pressure. De’Vondre Campbell was an All-Pro at linebacker last year, and his new sidekick Quay Walker has all the physical tools you could want. Jaire Alexander is an elite corner and his running mates are plenty good, too. But we have yet to see if the defense can be greater — or even equal to — the sum of its parts. With the injuries your squad seems to be facing, slowing down the Bucs might ultimately just be about who Tampa can put on the field more than what the Packers can do against them

According to DraftKings Sportsbook, Tampa Bay is currently favored by 1.5 points.