Most disappointing players from Buccaneers loss to the Dolphins 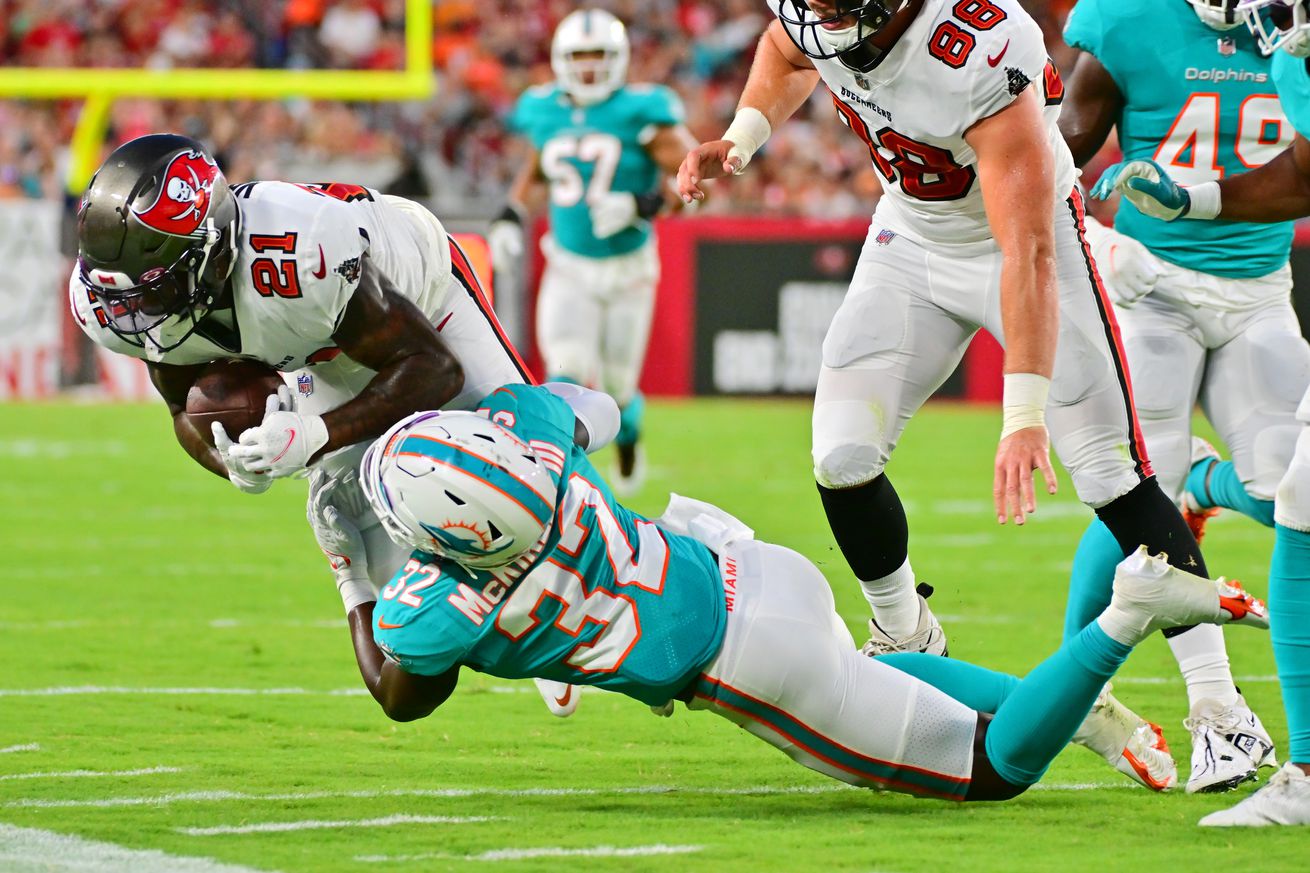 Who was the most disappointing in the Bucs preseason Week 1 matchup?

The Bucs had a fun outing in last night’s game vs. the Miami Dolphins. However, with as much good as there was in the game there were also some players who disappointed and lost some momentum for themselves in depth battles or in making a case to crack the 53 man roster. Let’s take a look at some players who need to show improvement following the Bucs Preseason week 1 loss to the Dolphins.

It was a rough debut for the recent fourth round draft pick of the Tampa Bay Bucs. While Camarda did manage to get one punt inside the 20 yard line, the rest of his kicks didn’t seem to have enough juice which left good opportunities for the Dolphins return team to get good field position throughout the game. Camarda should be able to bounce back and will need to if the Bucs are able to get good special teams play out of their starting Punter once the regular season rolls around.

McCollum looked lost on a couple of plays throughout the game, biting hard on a play action and having some communication/coverage errors that led to a wide open Lynn Bowden Jr. getting a big play on the Bucs defense in the game. With McCollum looking to compete for the fourth corner back job against established veterans Ross Cockrell and Dee Delaney, this wasn’t the best start. McCollum should be able to rebound however and continue to build momentum for himself moving forward with the remainder of the preseason.

While McMichael did have a nice pass breakup in the endzone at one point, there was also another play where he too gave up a long pass to Lynn Bowden Jr. due to communication/coverage errors in the secondary. McMichael is another player who is currently battling for a roster spot or even a practice squad position, and this was not the best showing to earn one of those opportunities.

While Vaughn did score a leaping touchdown during the game and also did some good things receiving out of the backfield, he also appeared to be ineffective as a runner when he was given opportunities. While all the blame can’t be place squarely on Vaughn (the run blocking was not the best), it was still noticeable that both Rachaad White and even Kenjon Barner showed to be better runners during the game compared to what Vaughn was able to produce. If Vaughn continues to struggle he could find himself falling down the depth chart quickly if White continues to provide positive play in his place.

There were some good stretches late in the game from the Bucs backup O-line but man, they had a rough start. Looking outclassed both in run blocking and in pass blocking, the backups gave up pressure that led to a Kyle Trask fumble and an ineffective run game throughout the early portions of the game. The positive here is that the unit did get better as the game progressed and were able to help the team get into a position to win the game once different rotations of the offensive line got going.

Borregales started off the game great sinking a 55 yard field goal with room to spare. However, things turned sour at the end of the game with Borregales missing the game winning field to give the Bucs the loss to the Dolphins to close out the game. This is unfortunate because up to this point Borregales was making a legitimate case to be the teams kicker over established veteran Ryan Succop. With missing the game winner it now looks like the Bucs will be more inclined to go with the veteran over the young kicker for the second season in a row.