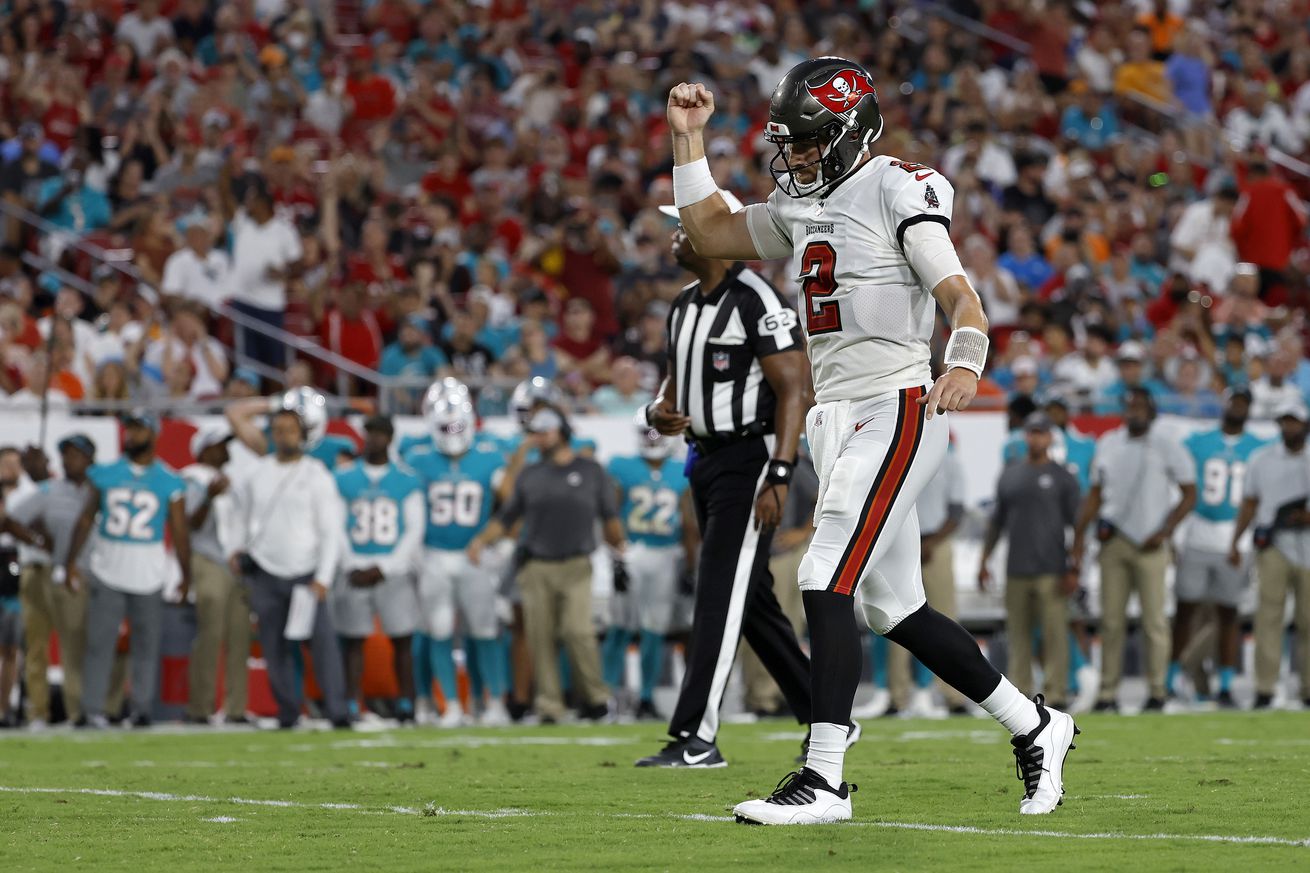 Preseason wins and losses aren’t looked at as the end-all for NFL teams and players. It’s the individual player performances that get the heavy look. And despite their 26-24 loss to the Miami Dolphins Saturday night, there was plenty the Bucs can still hang their hats on.

Offensively, the Bucs moved the ball well with Kyle Trask under center. He was able to overcome some bad situations and seemed to put those bad situations behind him quickly.

The 24-year-old signal caller finished the night 25-for-33 with a touchdown and an interception. It’s that type of performance that made head coach Todd Bowles talk about the things he liked from what he saw on tape.

“He was calm and he was in control of the offense, and that was great to see,” Bowles told reporters Sunday after reviewing film from the game. “He got put in a lot of situations that we practiced that are hard to do in the game your first time playing that amount of time. I thought he handled it well. His composure and his poise – not panicking in two-minute [offense], especially when it got to third-and-22 and when we had first-and-20 backed up – he kind of led the team down, he made the throws he needed to make and he made some good throws. His calmness and his poised and understanding of the situation was very good.”

Another player who has shown growth and maturity is outside linebacker Cam Gill. The third year player out of Wagner has had some opportunities to flash in his young career. You’ve seen progression throughout his play and Saturday night was no different.

Early on in the game, Gill chased down a speeding Miami receiver at midfield that potentially could have turned into a very long catch-and-run for a touchdown for the Dolphins. He finished the night with a sack and four tackles.

Gill’s hustle and play shows his growth and it’s something Bowles is very happy about.

“Cam [Gill] has been the ultimate professional. Every year he’s got something different from it that he learned the year before that he added to his game,” Bowles said after the game Saturday. “When he first got here, he was strictly power and he didn’t know how to play – his technique has gotten better, his awareness has gotten better, his drops have gotten better and he’s still a tenacious rusher – and we don’t mind putting him in there. We don’t feel like we lose anything when he goes into the ball game. He’s become very trustworthy.”

Both Trask and Gill have proven that commitment to becoming better and being patient pays off, at least for now. The two will undoubtedly continue to see extended playing time as the preseason goes on and rightfully so. But for now, it’s fair to say that the Bucs have two players they can certainly say have proven their ability to get better and that they can be relied upon when their names are called.