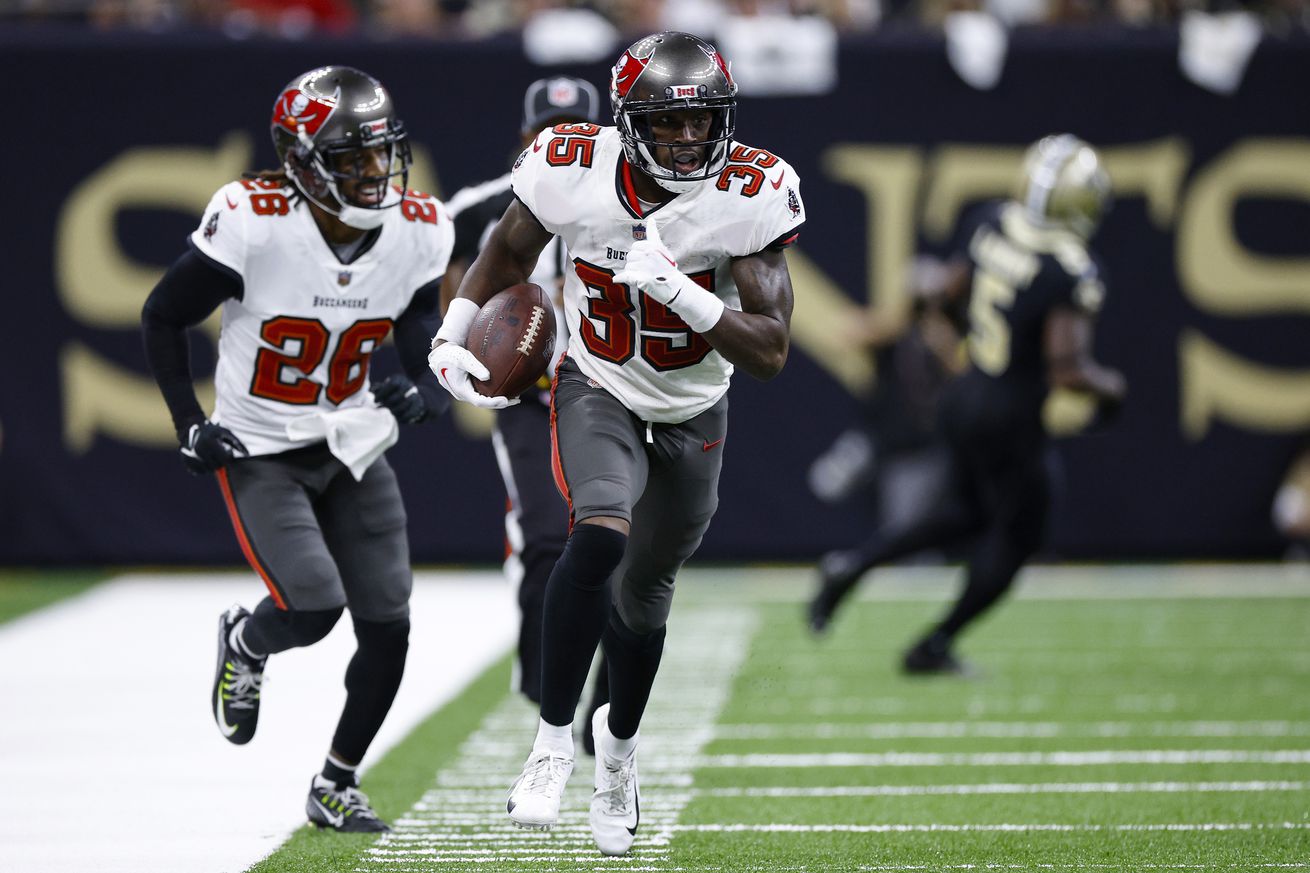 Defense sacked Winston six times, forced five turnovers, and scored on a “Pick- 6” to catapult them to 2-0.

The Tampa Bay Bucs snapped their seven-game regular season losing streak to the New Orleans Saints on Sunday in a hard fought 20-10 victory. The defense carried the team for the second week in a row as they forced five turnovers, sacked Jameis Winston six times, and scored on a Mike Edward’s 68-yard interception return. Tom Brady managed to generate one long touchdown drive with the banged-up Buccaneer offense, as they converted two forced turnovers into 10 points.

The Bucs defense started sluggishly, giving up an 11 play, 63-yard scoring drive which resulted in three points for the Saints. But, after that initial drive, the defense stepped up, and completely shut down the Saints offense in a performance reminiscent of the 2002 Buccaneer defense. They hounded Jameis Winston (236 yards passing, one touchdown, three interceptions) all day, forcing six sacks, and hitting the quarterback nine times.

Bucs safety Logan Ryan may have made the play of the day by forcing a Mark Ingram fumble in the red zone, as it looked like the Saints were poised to take the lead late in the third quarter. That play was the catalyst in a defensive onslaught that forced the Saints into three interceptions on their next nine plays from scrimmage.

The run defense was a bit leaky for the Bucs, as they gave up 102 yards on 20 carries. But, five forced turnovers, six quarterback sacks, and a defensive score, more than made up for it. If they can make the proper adjustments to solidify their run stopping ability, and clean up the unnecessary penalties, the Tampa defense may rank as one of the all-time greats at season’s end.

The high-flying Tampa offense was mostly grounded by a tough Saints defense on Sunday. The Bucs managed only 260 yards of total offense and tallied just 13 first downs. Luckily for them, the defense was plenty good enough to carry the team to a victory. Tom Brady (190 yards passing and one touchdown) actually played a fairly good game, even though the statistics say otherwise. He was accurate on the majority of his throws and was hurt by a couple of dropped passes that would have been big gains.

Leonard Fournette (65 yards on 24 carries) definitely got the usage that was expected from him. Unfortunately, the high number of carries did not translate into much yardage. The Saints defense did a good job of plugging up holes, and not allowing him any room to escape for a big play.

The offensive line suffered another injury when tackle Josh Wells exited in the 2nd quarter. Second year player Brandon Walton stepped in, and did an admirable job, as the Bucs only gave up one sack all day, and three quarterback hits. The 30 total rushing attempts did not translate into lots of yards, but the continued commitment to the run game will build confidence in the makeshift offensive line as the season progresses.

Special team’s play was good against the Saints. No huge punt returns were given up, and rookie punter Jake Camarda had three punts downed inside the 20-yard line. Ryan Succop made both of his field goal attempts, which were key scores in this tightly contested battle.

Winning the first two games of the season, on the road, against two playoff contending teams, is a wonderful start for the Tampa Bay Bucs. The defense is playing with confidence and lots of energy. As offensive players heal up, and return to the lineup, there should be an uptick in production.

The Bucs have a chance to become a very special football team in 2022. The season continues next week as the Green Bay Packers come to town for the home opener.