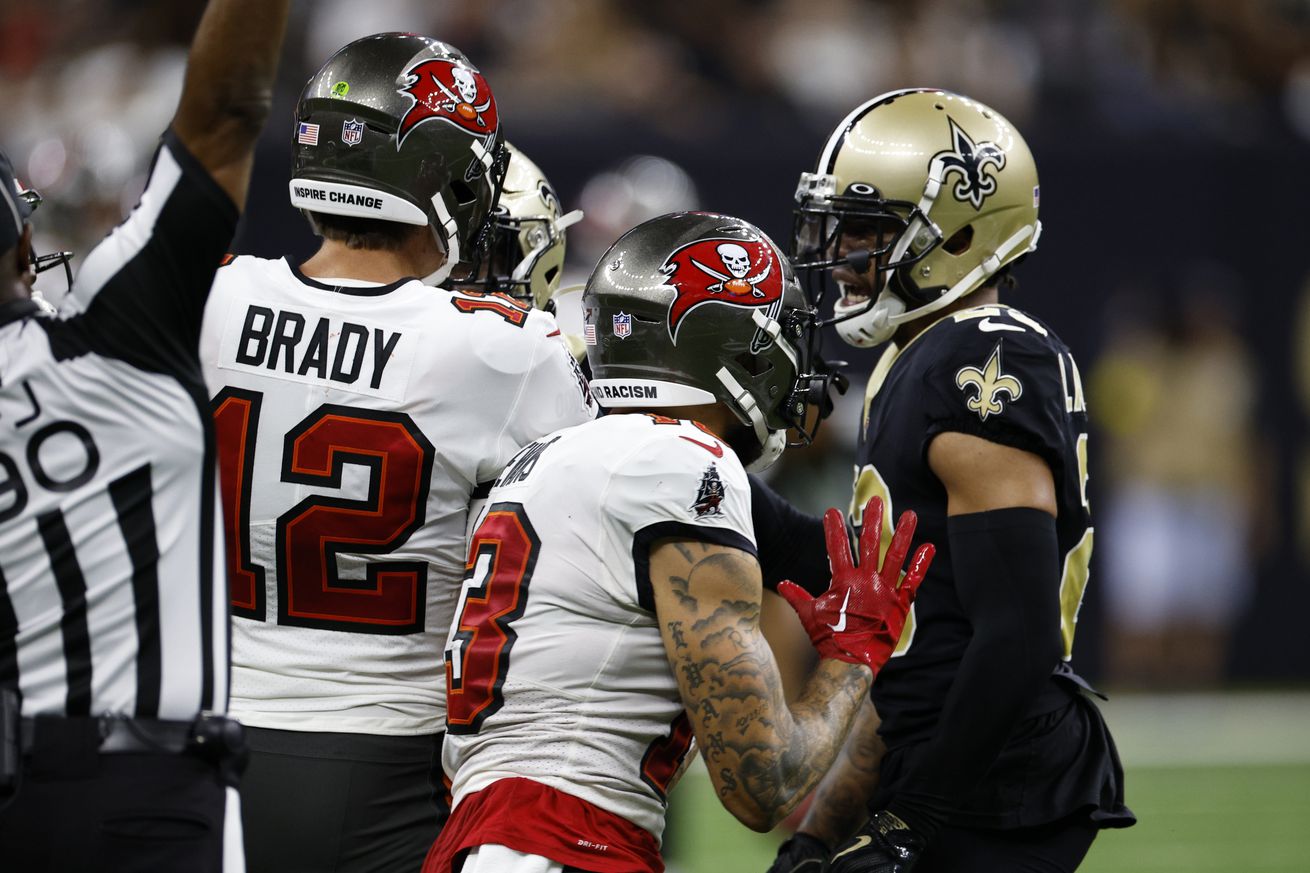 Well that certainly was interesting, wasn’t it? The Bucs trailed the Saints 3-0 for the majority of the game until Ryan Succop connected on a 47-yard field goal. Shortly thereafter, melee ensued. That fight sparked something in the Bucs who would go on to score 17 consecutive points and end up winning 20-10, marking their first regular season win in New Orleans since 2018.

1.) It’s Been A Long Time Coming. Marshon Lattimore has skirted the line of legality on the football – especially against the Bucs – for a long time now. He and Mike Evans flat out do not like one another and back in 2017, Evans was suspended for a game for hitting Lattimore after Lattimore pushed then Bucs quarterback Jameis Winston in the back of the head. This time, Lattimore was headed to the sideline before making a u-turn and going towards Tom Brady. Leonard Fournette stepped in and Lattimore shoved him in the face. That’s when Evans stepped in and shoved Lattimore, causing both benches to clear. Evans is likely looking at a suspension, but Lattimore should receive the same fate. Both were ejected for their participation in the extracurriculars so the NFL may deem that enough. Next time, Lattimore might think twice before starting in with his usual antics.

2.) The Offense Continues To Struggle. Fumble on the opening drive, turnover on downs on their second drive, and 5-for-17 on third down. The Bucs continue to have a slow start to the season on the offensive side of the ball. Yes, Brady was without two of his top three receivers for the game before losing his number one target in the second half. That left Russell Gage, Scotty Miller, Breshad Perriman, and Jalen Darden as Brady’s targets and to say things weren’t going smoothly is an understatement. Perriman had a great touchdown catch, but a crucial drop. Miller had just three receptions on eight targets with multiple drive killing drops. What on earth did they pay Gage for if all his receptions are within five yards of the line of scrimmage? Thank goodness the defense is playing at the level it is right now.

3.) Defense Wins The Day. Six sacks, five takeaways, and a touchdown for this Bucs defense in a place where they haven’t won in four years in the regular season. Jamel Dean had an incredible leaping interception in the end zone before getting a second one as he dove to the ground. Meanwhile, fellow defensive back Mike Edwards decided to take his interception all the way back to the end zone for a kill shot in the fourth quarter. The defense was getting after Winston and forcing him into mistakes that were all too familiar to Bucs fans. When Winston feels he has to play hero ball, the defense can become opportunistic and take the ball away – and that’s exactly what happened.

4.) Jamel Dean Is That Dude. Throughout the offseason, I spoke with my Locked On Bucs co-host numerous times about the battle between Dean and Sean Murphy-Bunting for that number two corner spot opposite Carlton Davis. We said that they weren’t just competing for a starting job but for a contract. With both players set to hit free agency, it’s highly unlikely the Bucs can bring back both. Dean has asserted himself as the clear leader in the clubhouse for that contract, but at this rate he may be pricing himself out of Tampa. However, that’s a concern for later on. Right now, just enjoy how great Dean is playing.

5.) Big Shout Out To The Big Man. Brandon Walton was put in an impossible situation. With starting left tackle Donovan Smith out, Josh Wells was called upon to fill in. Then, when Wells went down with an injury it was Walton who was called in to protect Brady’s blindside. Given the situation, the opponent, and his NFL experience up to that point, Walton was fantastic. Was he perfect? Absolutely not – but he was the third string left tackle. Can’t say enough about his gutsy performance.

6.) This Isn’t Over. Yes, it’s great that the Bucs got the win in New Orleans – but they’ll see the Saints again later this season. The turnovers, the fight, the brutal honesty of some comments are going to linger and stick with the Saints for the next few months until they come to Raymond James. The Saints will be ready for revenge and it’s on the Bucs to keep that from happening.

190 – Brady’s passing yards on Sunday, his second fewest in a Bucs uniform

DO NOT TEST JAMEL DEAN. Bucs take over following the interception pic.twitter.com/IdHba50T1T

“I don’t feel we’ve been at our standard these first 2 games, we just gotta get that going and the sky’s the limit for the Bucs D.”@ErinAndrews catches up with @Bucs LB @DevinWhite__40 after the Bucs Week 2 victory over the Saints. pic.twitter.com/7hAEKL2zSV

Bucs’ Mike Evans on what led to his altercation with Marshon Lattimore… pic.twitter.com/EsdkWnN9I9

5.) Miami Dolphins (2-0) – Incredible comeback win against Baltimore. These Phins might just be real

6.) Los Angeles Chargers (1-1) – Took Kansas City to the limit without their top receiver and with an injured quarterback

Next Up: Cheeseheads In Home Opener