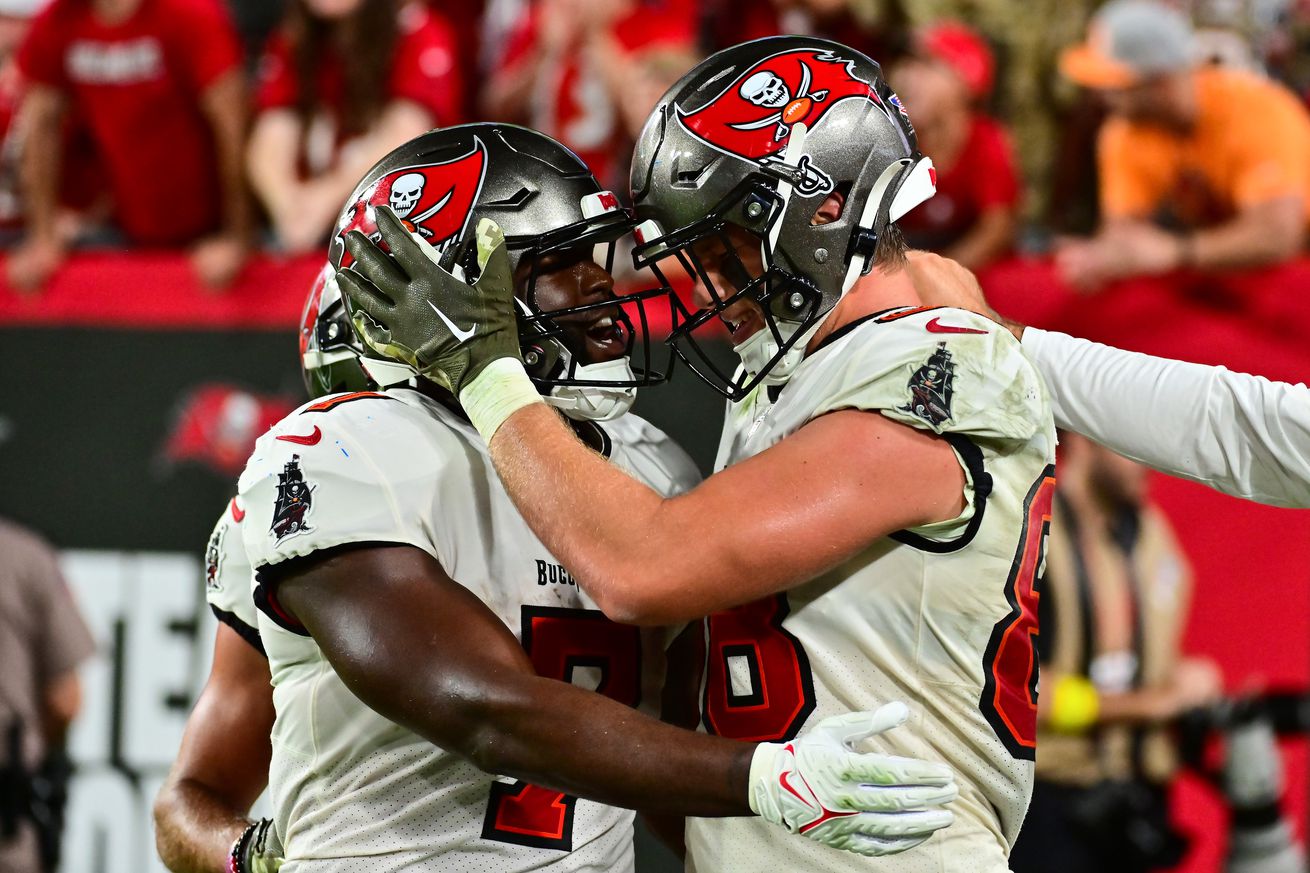 The Tampa Bay Bucs dug out of their half buried grave, and possibly saved the season, with a thrilling 16-13 victory over the Los Angeles Rams on Sunday at Raymond James Stadium. Quarterback Tom Brady led the Bucs on a six play, 60 yard, 35 second game-winning touchdown drive to secure the much needed victory. He threw the winning one yard touchdown pass to rookie tight end Cade Otton with nine seconds left in the game. It was Brady’s NFL record setting 55th game winning drive in his illustrious career.

Brady completed 36 passes out of a stunning 58 attempts for 280 yards, and the touchdown to Otton. He set another record earlier in the game by becoming the only player in NFL history to throw for over 100,000 yards in a career. On the final drive of the game, when the team needed him most, he completed five out of six passes for 54 yards, executing at the highest level possible, as he has done time and time again throughout his career.

Cade Otton, the 23-year-old rookie, caught the first pass of the game winning drive, and (obviously) the last pass. On the day, Otton had five receptions for 68 yards on six targets. Another unexpected player who stepped up for the Bucs, was veteran receiver Scotty Miller. He led the team with seven catches for 53 yards on eight targets. Unfortunately for Miller, the only target he missed was a potential game winning touchdown that hit him directly in the facemask. It was one of the Buccaneer’s six drops on the day.

Chris Godwin also recorded seven catches, for only 36 yards, on 10 targets. Mike Evans had five catches for 40 yards on 11 targets, with two more dropped passes to add to his season total. Evans also struggled blocking on screen plays and ran another questionable route on a third-down play in the second quarter. If the Bucs are going to turn into a playoff contender, Evans, as well as Leonard Fournette, need to start making plays they are more than capable of making.

The Buccaneer defense earned their first paycheck since week two, by holding the Rams to 206 total yards, nine first downs, and only allowing four conversions out of 15 third down attempts. Bizarrely, they still allowed Rams receiver Cooper Kupp to gain 127 of those yards, with 69 coming a touchdown strike in the second quarter. Kupp also had a 34-yard reception in the third quarter that lead to a Los Angeles field goal. Other than those two plays, the Buc defense played stoutly, and with great energy. They still did not force any turnovers, but held the Rams to 68 yards rushing, and sacked quarterback Matthew Stafford four times.

Safety Keanu Neal led the Bucs with 10 hard-hitting tackles. He is certainly one of the team’s most physical players and deserves more playing time as the season progresses. Cornerback Carlton Davis had six tackles, with one of those being for a loss, in a splendid return from injury. Nose tackle Vita Vea once again was a disruptor in the interior, totaling three tackles, two sacks, and generating three quarterback hits. A surprise performer on the defensive line was Genard Avery. He had two tackles, one sack, and hit the quarterback three times in limited playing time.

In a game that had 15 total punts, rookie punter Jake Camarda earned a gold star for sure. He averaged a whooping 59.5 yards per punt, with one of those a team record tying boot of 74 yards. With field position being so important in this slugfest, Camarda contributed mightily to the victory. Kicker Ryan Succop also was a top performer, making three out of his four field goal attempts, with a long of 50 yards. He did have a kick blocked, but that was more of a great play by Rams linebacker Bobby Wagner, as opposed to a bad kick by Succop.

A win is hard to come by in the NFL. The Bucs did not play a great game, especially on the offensive side. They managed to rush for only 51 yards on 20 attempts, committed seven penalties for 55 yards, and had multiple miscommunications on both offense, and defense. The team is still consistently inconsistent. But a win makes mistakes a lot easier to digest, and hopefully this will be the spark that was needed to get them moving in the right direction.

Next up for the Bucs is a trip to Germany to take on the first place Seattle Seahawks. The game is set for a 9:30 AM ET kickoff and will be broadcast on NFL Network.